Since former president Barack Obama eased restrictions on Cuba-U.S. relations in late 2014, America's awareness of its island neighbor has slowly grown, seeping into public consciousness from a foggy realm of exile. Maybe you know someone who's made the trip, returning with the requisite photographs of 1950s cars or even with the classic contraband of cigars.

Cuba, however, is much more than the touchstone images and cultural stereotypes ingrained in Americans' minds. "El Yuma: Contemporary Cuban Art," now on view at the McCarthy Art Gallery at Saint Michael's College in Colchester, aims to complicate and enhance mutual island and mainland understanding. Curated by Sachie Hernández of Havana and Aynel David Guerra of Boston, the show features works by 14 Cuban artists who were asked to present their perspectives on the giant next door. The show first opened in November last year as the debut exhibition of Boston's A R E A Gallery, which Guerra codirects.

"El Yuma" is in good company. Before the presidential election, and predilections, of Donald Trump threatened to close the newly opened channels of communication, numerous Cuban art exhibitions were ushered into the U.S. Abby Ellin recently chronicled, in the New York Times, some of the considerable roster of shows: at El Museo del Barrio in New York, the Pérez Art Museum Miami, the Walker Art Center in Minneapolis and the Annenberg Space for Photography in Los Angeles.

Even the Cuban slang for the U.S., el Yuma, is entangled in the cultural flow between the two countries. Hernández explained during a recent curator's talk that the name comes from the 1957 American western 3:10 to Yuma, set in Arizona.

The frankest of the works on view is Mari Claudia García's "Genealogy of the Metaphor." For this silent video, García asked her family members to reflect on the meaning of el Yuma, bringing Guerra and Hernández's charge outside the artistic sphere. Sitting in front of a white background, each family member looks intensely — and silently — into the camera, while the text of their interview appears in English subtitles below.

The word yuma, says one older man, is a rude expression for an American, often "used by a lower stratum of the population, people who didn't want to have access to culture." A young woman notes that the word "represents desire for many Cubans"; for her, it evokes ideas of consumption, accumulation and tension. Another young woman says, "I think of a lot of ads" and "sadness." 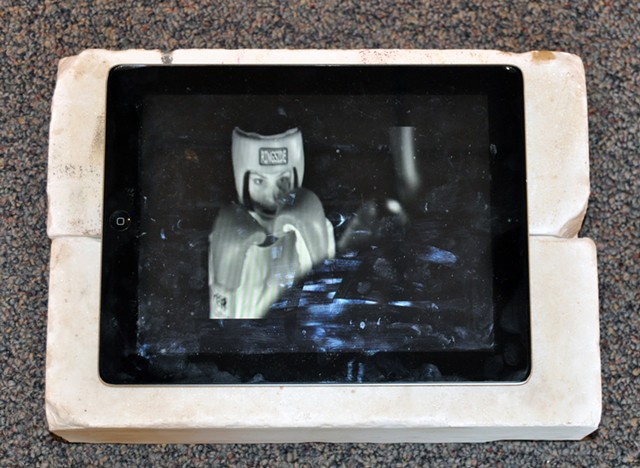 The association of the U.S. with capitalist consumerism is a thread running throughout the show. For "Capital Cutout in Transit Sites," Jesús Hdez-Güero has sacrificed $185 in American bills ($100, $50, $20, $10 and $5) in service of a simple and surprisingly effective intervention. From each bill, he has cut the monument or structure represented and used it to frame the real thing in a photograph; he holds an altered $20 bill, for example, in front of the actual White House.

The resulting photo series is a reminder of the intrinsic links between financial power and specific physical places — which, whether we think about it or not, both operate through an economy of shared symbols.

Another American symbol interventionist is Angel Ricardo Ríos. The installation "My Modest Opinion" appropriates and recontextualizes the iconic imagery of Mickey and Minnie Mouse. On the wall hang 30 black-and-white photographs of homemade Mickey and Minnie piñatas, each photo uniquely altered with colorful paint, scribbles and graffiti-like symbols.

As Hernández points out in her curatorial essay, Ríos' style of manipulating one American icon invokes another: Andy Warhol. The work's overall effect is fun, funny and violent. A wall-mounted iPad illustrates the work's aggression, playing a looping video of children beating Disney-inspired piñatas in slow motion.

The duo billed as Meira y Toirac (Meira Marrero and José Angel Toirac) addresses violence and consumerism in a completely different (but still cheeky) way. Their series "Remember the Maine" includes nine artist-made commemorative souvenir plates, some of which feature real historical images and others, invented ones.

The plates' commentary likely will not be obvious to the average American; it centers on the eagle monument erected at Havana's Malecón esplanade in honor of the American victims of the USS Maine. The explosion of that ship in 1898 sparked the Spanish-American War, which launched the U.S. into international affairs and subsequent imperialism. Throughout its more than 100-year tenure, the monument has been damaged, altered and deliberately vandalized, a living metaphor for turbulent politics.

With their plates, Meira y Toirac subvert a classic form of industrial kitsch to memorialize more obscure histories and to propose imagined futures.

Another, more scathing critique of American imperialism is Levy Orta's "Against the Will to Forget." The installation consists of printed pages from the U.S. government's KUBARK interrogation manual; first published in 1963, the document outlines "coercive techniques" of torture used during U.S. military interventions in Latin America and, more recently, in Afghanistan and Iraq and at the Guantánamo Bay detention camp. The manual was further declassified in 2014; as Orta's title implies, the artist fears its existence will be quickly swept under the rug.

"El Yuma" is not a sad show, but it is a serious one, and its gravity builds gradually. Overall, the exhibition provides a welcome primer on a complex history, as well as a promising glint of that thing art types love: expanded dialogue. Most significantly, it asks American viewers to really try to see how we're being seen.