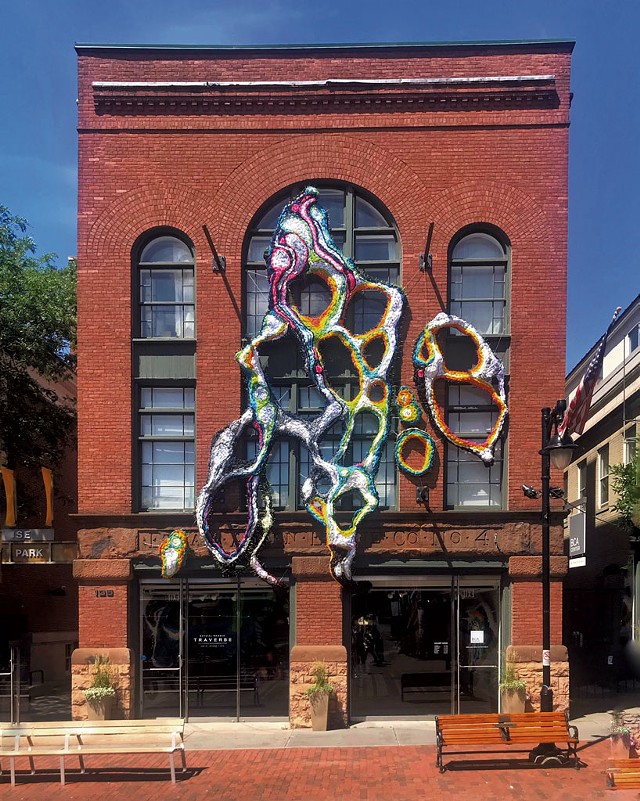 As if this latest heat wave created the perfect conditions for new life to emerge, something very big has taken over Burlington's BCA Center. Sprawling across the entire façade of the former firehouse, Crystal Wagner's site-specific installation "Traverse" bursts with color and organic movement, like a Technicolor mycelium or a super sexy — dare I say throbbing? — data visualization. The art equivalent of a juicy summer blockbuster, the work is fun, in-your-face and hard to resist. Just ask the passersby clustered outside, smartphones raised.

Conceived and fabricated over just two weeks, Wagner's floor-to-ceiling, indoor/outdoor intervention takes up space. The Philadelphia-based artist noted that the BCA Center is one of the smaller venues to host her monumental work. Instead of feeling contained or repressed, however, Wagner used the opportunity to do something new in her practice: "Traverse" is her first installation to incorporate both interior and exterior space.

Regarding Wagner's massive, flashy bioform, one might class it as belonging to the realm of high-production-value science fiction. But her chosen materials are anything but sleek: torn plastic tablecloths (which she's been saving for up to five years) woven through chicken wire. For the exhibition's outdoor appendage, sturdy nylon replaces the less weather-ready plastic, held together with zip ties.

The genus and species of the form Wagner concocted may be alien, but many of its components seem familiar. The sculpture's dense core, located in the front gallery, bears orange, yellow and white concentric markings set against purple and blue; they bring to mind butterfly wings. Swirling fields of blue and white or black and gray have the spongy texture of bone marrow, and spire-like branches seem to grow outward from the center.

Viewers who explore will be rewarded with the find of a pseudo-private, plastic-walled enclave, complete with hobbit-y peepholes for looking out. With its unabashed embrace of organic forms and larger-than-life scale, the work as a whole is a touch reminiscent of "Body Wars," the Disney World simulation ride through the human body.

Once the initial awe of "Traverse" subsides, viewers will find that Wagner switches things up in the back gallery with six midsize, wall-hung paper sculptures. Where "Traverse" is maximal and loud, these works beguile with the intricacy of their construction: layers of screen-printed paper painstakingly adhered and shaped over wire frames.

Wagner's visual vocabulary in these pieces is consistent with "Traverse," but the change in scale makes them more like specimens to be observed with scientific detachment. The malleability of paper allows for more delicate flourishes: patches of tiny scales, for example, or mesh-like layers of paper circles (not recommended for the trypophobic). This is a family of mutants, and they're quite pretty.

Czapinski's primary body of work on view consists of small frames wrapped in opaque mesh and punctured by intricately stitched shapes. Some of these three-dimensional thread forms — or "drawings," as the artist calls them — stand alone. Others, like "a faint, shadowy trace" or "as above, so below," expand across multiple frames, echoing the impulse of life to reach outward that Wagner articulates so clearly.

To call these "fiber works" might be clumsy. But, comparing them with Wagner's installation, one easily sees the artists' shared link to the fundamental motion of textiles and to the mantra of potholder-making tweens everywhere: over/under. Indeed, a black-and-white Instagram photo of Wagner assembling a frame for "Traverse" recalls sculptor Ruth Asawa, with whom both Wagner and Czapinski have commonalities.

As Czapinski indicates in her exhibition title, she frames the basic process of plane-crossing in terms of life, death and eternity. This profound simplicity is driven home by "so many ways of being," on the gallery's west wall, which consists of 36 rectangles of plastic craft-store mesh or translucent paper. Each plane is interrupted by colorful pipe cleaners or strips of black paper. Here, Czapinski looks to be at play, and she is: She'll reconfigure the work periodically throughout the show's run.

Also in flux is Czapinski's time-sensitive sculpture "a soft pause," residing at the center of a table that is part of a larger work titled "at all times, not much, a small amount." Here, ice melts through a wire screen into a bucket, slowly revealing a dark rock embedded in it. This real-time action is surrounded by objects gleaned from everyday life and suggestive of an artist's mood board: a green plastic basket, rocks, a jade plant, a small sculptural study and more.

Although Wagner and Czapinski employ vastly different approaches — or perhaps because they do — it's fun to consider these exhibitions as a pair. One uses wire and tablecloths, the other mesh and thread, but exciting similarities emerge between Wagner's daring, crowd-pleasing extroversion and Czapinski's steadfast ethereality. Both use fundamental textile techniques to take up more space than we may expect. Both demonstrate that the worlds we know and the worlds we imagine not only coexist but can be represented captivatingly through the simplest of processes.