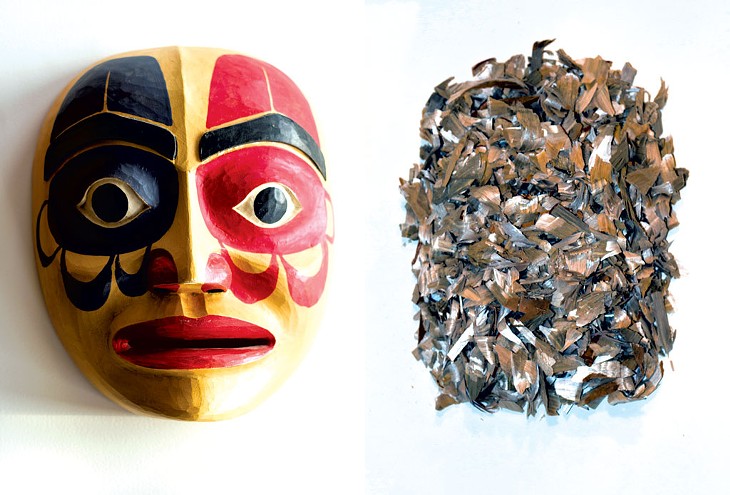 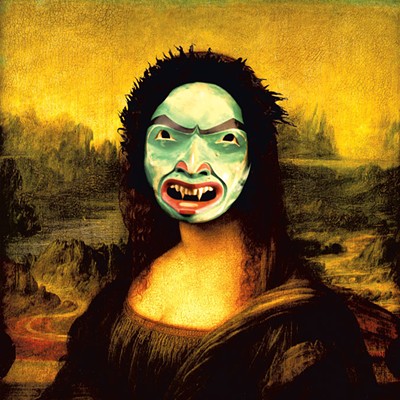 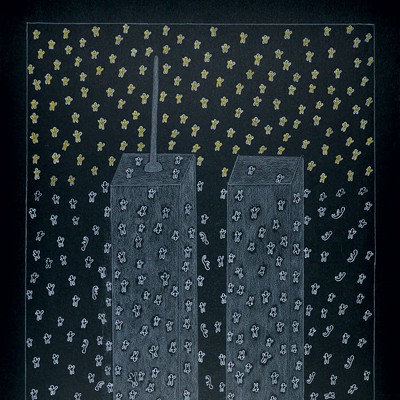 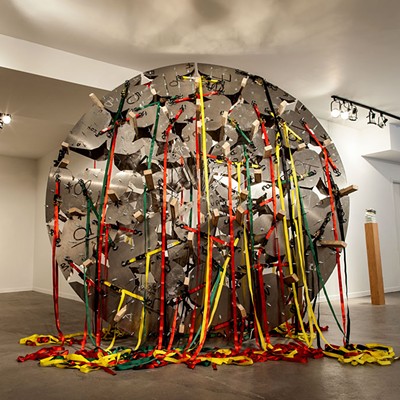 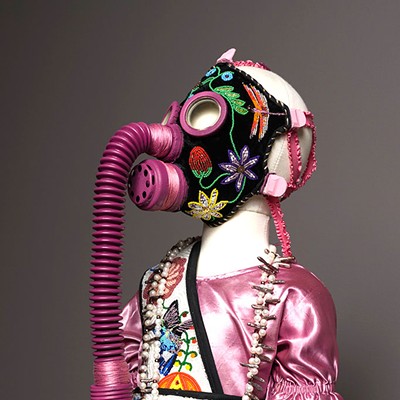 In the sea of international art fairs, festivals, receptions and parties, only one biennial is devoted to contemporary art by Native and indigenous artists. The third iteration of the Contemporary Native Art Biennial is ongoing through June 26 in Montréal, featuring more than 50 First Nations and indigenous North American artists at four arts venues.

The biennial is remarkable for its scale, clarity of vision and commitment to making current Native art visible to a broader public. A wide swath of artists and mediums is represented, from established artists such as Nicholas Galanin, Maria Hupfield and Nadia Myre to emerging ones such as Caroline Monnet and Nico Williams.

At this exhibition modeled after the Venice Biennale, the works are organized by the geographic — and tribal — provenances of the artists. Art Mûr (5826 rue St-Hubert), one of Canada's largest private contemporary galleries, provides the biennial's Central Pavilion. The Western Pavilion is at Stewart Hall Art Gallery in Pointe-Claire, on the southwestern edge of the island of Montréal. Here, in addition to the works on view, Vancouver artist Luke Parnell is completing a six-week residency during which he will carve — and saw in half — an eight-foot totem pole.

"Culture Shift" is the theme of this year's biennial, building on 2014's "Storytelling" focus and 2012's inaugural "A Stake in the Ground" exhibition. Art Mûr's French translation of "culture shift" is "une révolution culturelle."

Guest curator Michael Patten, a member of the Sakimay First Nation, notes in his exhibition text that the "shift" embodied by the biennial goes two ways. First, it showcases the work of artists who define new indigenous identities through creative innovation and artistic freedom. Second, it urges settlers to "open up to their indigenous neighbors and recognize how their culture can influence a society that can be more egalitarian and compassionate."

One work that exemplifies such mutual exchange is Myre's "A Casual Reconstruction." Myre is a Montréal-based artist of Algonquin descent who curated the inaugural 2012 biennial and, in 2014, received the country's prestigious Sobey Art Award (for Canadian artists under 40). Her 30-minute video installation is a recording — primarily audio — of a mealtime conversation with friends and family. The group discusses, sometimes heatedly, what it means to them to be Native today. "Who versus what you are," for example, or the way that younger generations have gleaned the Mi'kmaq language piecemeal from elders and "on the street."

Six chairs are arranged in a circle near the screen, with a spotlight beaming on them from the ceiling. As this writer took in the video, three young women of Native descent sat and talked, corroborating what they were hearing. "These are conversations I've had," said Swaneige Bertrand.

The conspicuous lack of video — the screen stays mostly black —emphasizes Myre's concern with language and verbal exchange. This choice to minimize the visual in a video installation indicates the ways in which language continues to move within cultures forced from visibility. It could be read as a movement against visual colonialism. The work demands engagement; the "viewer" is made into both a listener and, by the suggestion of the seating arrangement, a participant.

Many other works have a decidedly futuristic air. Naomi Bebo's "Woodland Child in Gas Mask" is arresting in its combination of traditional beadwork and apocalyptic survival gear; the tiny gas mask bears beaded flowers, berries and insect life.

In "Home Coming," Sonny Assu offers a "digital intervention" for a painting by Paul Kane, an Irish Canadian known for his idyllic 19th-century paintings of First Nations people. Assu placed highly graphic, stylized Northwest Coast motifs in the sky of Kane's landscape; the figures descend like UFOs. The interruption serves as a contemporary counterpoint to Kane's view, which freezes the painting's Native subjects in the past. Assu's alteration is reminiscent of graffiti and tagging, as well as the paintings of California artist Wayne White.

Beyond these digital remixes, many other works address technology and technological discourse. Williams uses design software to plan his intricate, geometric beaded sculptures, equating the tiny, colorful beads with pixels. One of his five tetrahedrons features beaded birches — paying homage, according to Williams, to his Ojibwe ancestors' ingenious uses of the tree. Another tetrahedron depicts iconic features, natural and manmade, of Montréal.

In a perhaps more obvious conflation of traditional art forms with present-day technology, Ningeosiaq Ashoona has carved a miniature computer desk and chair from soapstone, complete with a minuscule ivory seal carving on top. "Computer Desk" is one of many pieces at the Canadian Guild of Crafts that address modern chaos and conflict through the passed-down Inuit arts of carving and printmaking.

Many works engage with the violence and detritus of consumerism. Joi T. Arcand's diorama "Through That Which Is Scene" is a tabletop landscape populated with toy models meant to represent Native peoples, ridiculously disparate in scale. Plastic cowboy and Indian figurines no more than two inches in height stand near the wheels of a comparatively giant model pickup truck; a mass-produced doll in some approximation of "traditional" dress towers over the scene at nine or 10 inches tall. In Bremner's "Cowboys N' Indians," the plastic figurines fight around the edge of a leather drum. Neon Kohkom places commercially produced "headdresses" at the bottom of aluminum garbage cans.

The "Modicum" installation, by Leonard Getinthecar (a collaborative alias of Nicholas and Jerrod Galanin) and Nep Sidhu, situates a life-size model of a SWAT team policeman amid a plethora of paper coffee cups suspended with string. Each cup bears the name of an individual who was "extra-judicially" killed by police, smartly linking two types of disposability.

The political climate in Canada — and elsewhere — suggests that now is an excellent moment for renewed attention to the work of Native artists. In December 2015, Canada's Truth and Reconciliation Commission released its final report, which included 94 calls to action primarily addressed to the government. Art Mûr assistant director Anaïs Castro likened the recent birth of Canada's Idle No More aboriginal movement to the Black Lives Matter surge in the U.S.

Yet the organizers of the Contemporary Native Art Biennial do not wish to simply capitalize on a moment of heightened political consciousness — biennial implies ongoing engagement. "It's not like it's going to be [just] a trend," said Castro. "We want [to provide] continued support that an individual show wouldn't be able to accomplish."

"Culture Shift" invites, and challenges, viewers to consider Native cultural expression, resistance and continuity as dynamically invented and reinvented by artists. As Art Mûr directors Rhéal Olivier Lanthier and François St-Jacques suggest in their introduction to the biennial catalog, "It is up to you to reply to this invitation."

The original print version of this article was headlined "Indigenous Futures"