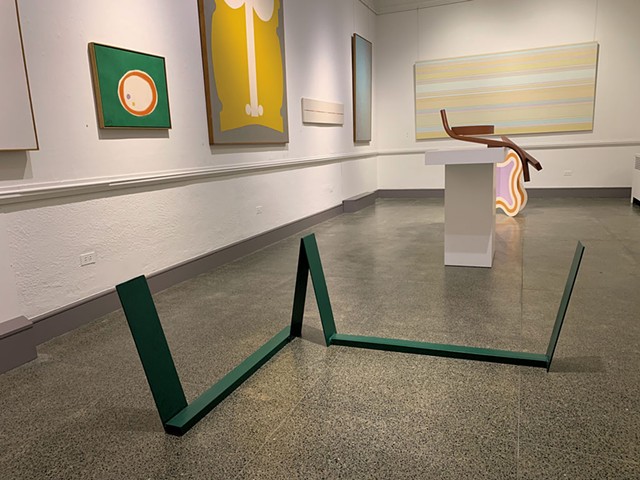 When Jamie Franklin became curator of the Bennington Museum in 2005, he started connecting with artists' estates and living artists linked to Bennington College's midcentury heyday. Founded in 1932 as a women's college, Bennington was a hotbed of American artistic experimentation from 1950 through the mid-1970s. Its nearly all-male faculty had close connections to the New York gallery scene and influenced a generation of women students, who went on to gain their own fame. (Bennington went coed in 1969.)

Five years ago, Franklin and then-executive director Robert Wolterstorff decided to dedicate a room in the museum to the college's key role in modernism "because it was such an important part of the town's cultural history," said the energetic, longhaired curator during a recent visit.

The Bennington Modernism Gallery, a permanent installation with changing works, is currently hosting "Color Fields: 1960s Bennington Modernism." The show was conceived to pair with a special exhibition in adjacent rooms about how the 1960s effected similarly radical changes in Vermont's society, politics and culture.

Because of the pairing, Franklin said, "we made sure to get top-notch works" for "Color Fields." These include a pastel-striped painting by Kenneth Noland, a guest lecturer and the subject of a 1961 exhibition at the college; two sculptures by Sir Anthony Caro, who taught at the college from 1963 to 1965; and a soak-stain painting by Helen Frankenthaler, who graduated in 1949.

This exhibition of 14 works offers a window on Bennington College's central role in the midcentury American art scene, but it's also a must-see for its gender reenvisioning of a male-centric era.

Color-field painting — along with minimalism and hard-edge painting — was part of a 1960s reaction against the gestural, emotional work of abstract expressionists such as Jackson Pollock and Willem de Kooning. The idea was to create abstract "fields" of flat color in simple compositions that celebrated the sensuous experience of color.

Clement Greenberg, the critic and art-world influencer of the day, named the movement "Post-Painterly Abstraction" — the title he gave to an exhibition he curated at the Los Angeles County Museum of Art in 1964. Of the 31 artists Greenberg selected for that exhibit, only one was a woman: Frankenthaler, with whom he had had a relationship from 1950 to 1955. During that time, Frankenthaler introduced Greenberg to Paul Feeley, her former teacher, and the two men co-mounted at Bennington the first-ever retrospectives of Pollock and Barnett Newman.

Feeley went on to head the art department in the '50s and early '60s, and three more Greenberg mentees soon joined him: Noland, Caro and Jules Olitski, who taught at the college from 1963 to 1967. The four Bennington-based artists were dubbed "the Green Mountain Boys" in a 1966 Vogue article, which cemented the image of Bennington modernism as male. Their works continued to be shown together as late as 1998, at a New York gallery show that was well reviewed in the New York Times.

Frankenthaler, for example, pioneered soak-stain painting, which involved pouring thinned paint onto unprimed canvas and letting it soak in. The method was a major influence on Noland and other color-field artists.

Frankenthaler's "Cascade" (1966), her sole painting in "Color Fields," is a later work in that vein, after she had jettisoned oil for acrylic paint. Compared with her enormous and exuberant "Jacob's Ladder" (1957) in the newly revamped Museum of Modern Art in New York, "Cascade" is small and uses pared-down forms: only two swaths in yellow and violet with a smaller green stain and an accent of red.

Feeley has two works in the exhibition. "Untitled (Green Eye)" (1962) places two rectangles of strangely paired colors — dark orange and brick red — side by side on a white canvas. In the center of the left rectangle is a circle, unpainted except for a green ball at its core, like an iris.

While Feeley's application of oil-based enamel leaves hints of the canvas visible beneath the paint, his floor sculpture in the show, "Enif" (1966), uses the same paint to create solid areas of color on wood. Named for the main star in the Pegasus constellation, the sculpture has two intersecting planes — the bare minimum needed to create three-dimensionality. They compose a toothlike shape whose painted lavender center and orange stripe are both outlined in white.

Ruth Ann Fredenthal, a student of Feeley's who graduated from Bennington in 1960, may or may not have painted "Enif." But, as his studio assistant for six months in 1965, she did paint all of Feeley's sculptures for an exhibition that year at the Betty Parsons Gallery in New York City. Also in 1965, Fredenthal created her own painting, "Hermaphrodite," which appears in "Color Fields."

The sizable canvas features the sparest representation of combined sex organs imaginable: a thin vertical block adorned at the ends with two pairs of circles. The sharply delineated form in creamy white is contained inside a yellow, boxier one with half-circular tabs defining its slightly bulging form. The whole is bordered in matte silver.

A Fulbright scholar in painting in Florence, Italy, after her graduation, Fredenthal has work in several major Italian contemporary art museums. She won the Pollock-Krasner Foundation grant in 2008.

"Color Fields" opens with "Study for Color Room," a small, informal colored-pencil sketch by another of Feeley's students, Patricia Johanson, who graduated in 1962. In 1960, while her teacher was absent, Johanson used colored paper to remake his office into an installation she called "Color Room." An exploration of hue as experienced in space, the work created a buzz that drew Noland and sculptor-painter David Smith to see it before the college dismantled it days later. 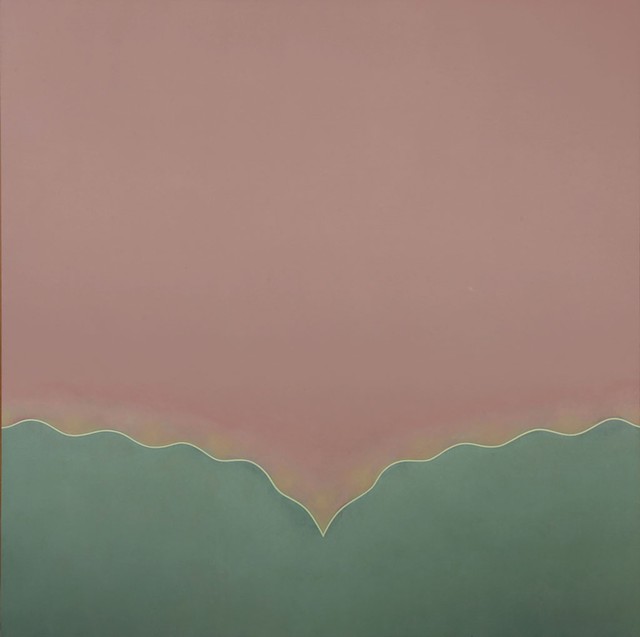 Johanson's other work in the gallery, "Model for Hayden Survey" (1968), is indicative of the increasing scale she has worked on ever since. A thin horizontal line of precise lengths of color stretches across a long canvas, a model for an 80-foot work that was never realized. Johanson named the painting for the 1871 geological survey of Yellowstone Park. According to Franklin, the painted line's three yellow segments are "conceived as vanishing points. You experience them as you move along the canvas."

Johanson's recent large-scale artworks combine public infrastructure with ecological restoration, among other environmental concerns. Franklin described Johanson as "integral to this exhibition" because she was "steeped in high modernism, pushed beyond it and is still working today while drawing on the core values she learned at Bennington."

Pat Adams was Bennington's first full-time female teacher. Her long tenure, from 1964 to 1993, overlapped with the shorter one of her husband, Vincent Longo, from 1957 to 1967. Both artists are included in "Color Fields."

Adams' "Along and At" (1966) and "Steady Change" (1969) have in common an elegantly sinuous line. In the first work, an abstract but recognizable rendering of green mountains and pink sky on canvas, the line forms a yellow border for the mountains. In the second, a work on paper uniformly stippled with acrylics in various shades of green, the wavy line becomes a multicolored frame inside the actual frame.

The most pleasing use of color, for this reviewer, appeared in two metal sculptures by British artist Caro: the rich red-brown of "Table Piece LXVI" (1968), whose gracefully industrial form is reminiscent of farm implements and balances on the edge of a white table; and the dark grass-green of the angular, floor-bound "Green Sleeper" (1965).

While space does not allow a mention of every piece in this show, each deserves viewing and conjures pleasure out of simple color.

"This is kind of the apex of high modernism," Franklin pointed out. "[Later, with] pop art, conceptualism, assemblage, installation, it started to become this complicated, swelling world we know today. But for artists working in an abstract vein and thinking about formalism — color, line, stripping painting down to its elements — Bennington was leading the way."