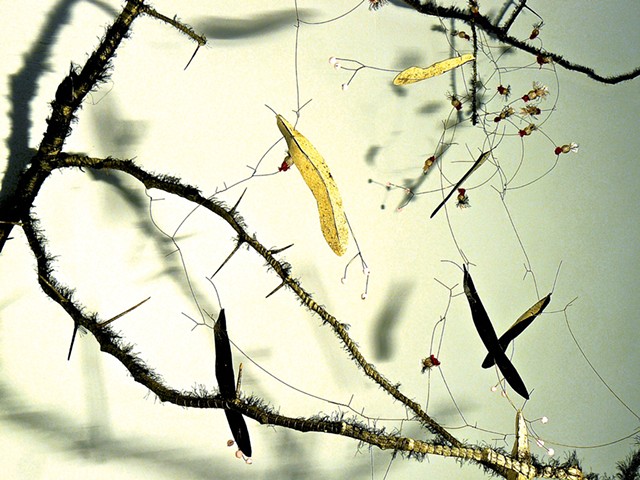 Brenda Garand's 12 new works on exhibit at the White River Gallery at BALE in South Royalton encapsulate much of what is compelling about her sculpture and drawings. The West Hartford artist identifies herself as a sculptor, and most of her extensive body of work is sculpture. However, two-thirds of the works on display are abstract drawings created using walnut ink, India ink and flood clay.

Materials are of great significance to Garand; she makes her own walnut ink and sources flood clay from her land. "Materials carry their own energy: whether it is cold rolled steel, flood clay, wool from the Johnson Woolen Mills, quills from the eastern porcupine, walnut ink that I make or black felt paper reminiscent of days worked roofing with my father," she writes in her artist statement. 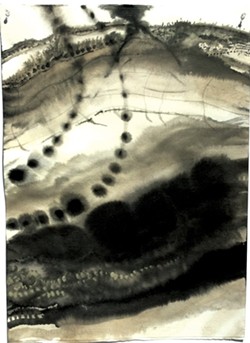 Garand first embarked on a series of drawings following Tropical Storm Irene in 2011. When Irene stalled over part of Vermont on August 28, 2011, the White River rose high above its banks and dredged up clay from the riverbed. The river came on like a fury, bringing rocks and debris while leaving much of the clay behind. The flood changed the landscape permanently, damaging Garand's home, studio and surrounding land.

The artist's eight new pieces here continue her exploration of nature, devastation and the recovery of beauty amid loss. Four wall sculptures convey strength and resilience; constructed of thin wire, they are strong but flexible.

Garand's materials often reflect on where she's come from — sometimes quite literally. Wool and wire might reference the farm on which she grew up, while flood clay and walnut ink come from the land where her home and studio are located.

Now 56, the artist was raised on the family farm in Hancock, N.H. She earned her BFA at the University of New Hampshire and her MFA at Queens College of the City University of New York. Subsequently, she lived in Paris and New York; in 1995, Garand became a professor of studio art at Dartmouth College and moved to Vermont. 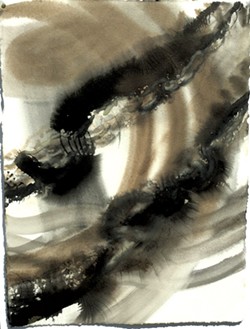 The sense of place makes frequent appearances in her work. "Vermont, New Hampshire and Québec are regions that I cull from," Garand says, "within my own heritage of French Canadian, Abenaki and English." In this exhibit, the White River's influence is evident in her drawings, particularly in the dark horizontal bands that flow across the paper. They are not neat, confined swaths of ink, as might depict rows of tilled fields. These are blurry and powerful, moving outside the confines of a line. The shapes are unruly, without boundaries or hindrances.

Four drawings in the exhibit, on heavy watercolor paper, incorporate flood clay. All four are titled "Deluge," and all are 30 by 22 inches. The title makes conspicuous their mutual subject matter — Tropical Storm Irene — yet it could allude to any overwhelming occurrence or circumstance.

Though not the first works Garand has created with that title, these are all new and exhibited here for the first time. Working outdoors, she applies the clay on heavy paper and then hoses it down, leaving a muted red-brown wash that contrasts with the darker hue of the inks.

One "Deluge" painting is constructed similarly to a landscape painting, albeit vertically. While the lines, drips and brushwork at the top of the painting are abstract, they suggest hills, trees, an orchard and an open field torn by rushing waters. The "necklace" of droplets makes it seem as if the viewer were observing the scene through a camera lens while rain was still falling. Paintbrushes and razor blades were used to draw marks on the painting. The latter made very thin hatch marks, as if denoting the passage of time.

Garand's paintings have an almost ethereal appearance: Light alternates with powerful dark beauty. Another observer might see the darkness as anguish, likening the distress created by a natural disaster to that of a war zone. The droplets might appear to that viewer as explosions in a night sky, the hatch marks as barbed wire stretched across a beach to keep the enemy at bay.

Four sculptures, primarily made of natural materials, are also on exhibit. Three of them share the same title: "Northern Cross." Like all of the works in this show, these were created in 2016. The largest, 60 by 51 by 13 inches, is made of beaver stick, hawthorn, silk, roofing paper, porcupine quills, wire and wool. Garand starts with found sticks that bear the markings of beaver teeth, wraps them with silk threads, wool and fine wire, and attaches thorns to the branches.

These hawthorns look almost like talons and can cause serious pain when they puncture the skin. Here again, Garand couples beauty with inherent danger. The wire connecting the branches resembles a web or cocoon.

In a corner of the 16-foot-high gallery hangs "Suspension of Disbelief," a 20-by-15-by-13-inch sculpture. Surrounding a vacated hornet's nest, wire, silk, porcupine quills and wool form a whorl like a small storm. Garand's signature pieces of painted roofing paper, shaped like leaves or small pods, are also part of the colorful swirl.

The exhibition's title, "Touching at a Distance," may have multiple meanings: the physical act of touching or being touched; or the experience of being emotionally touched by something or someone. "Distance" could refer to time elapsed since the flood or to the expanse between the river and Garand's home.

When gallery director Dian Parker began curating shows at White River Gallery, one of her challenges was to find artists whose work could be exhibited effectively in the 500-square-foot community space. With this final exhibit of the year, which follows shows by Lynn Newcomb, James Vogler and Bunny Harvey, she should give herself a pat on the back. Garand has indeed touched viewers with this new work — and it doesn't have to be seen at a distance.

The original print version of this article was headlined "Material Witness"