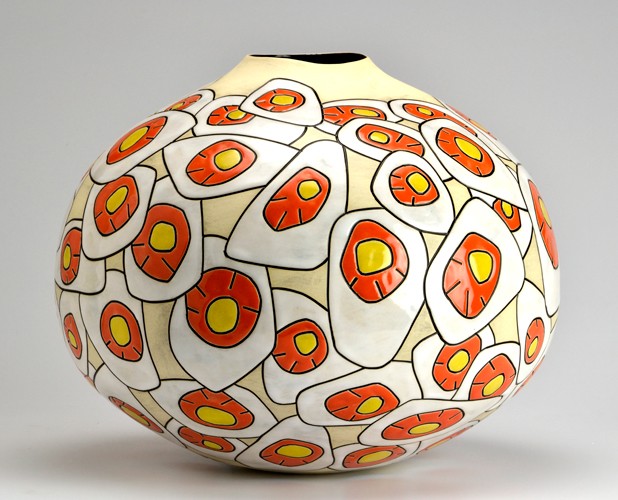 Viewed on its own, a work of art will look one way. Viewed in conjunction with other pieces both like and unlike it, that same work might be seen quite differently.

This synergistic effect operates at full force in a new group show of about 50 works by 18 artists at Furchgott Sourdiffe Gallery in Shelburne. “Boldly Patterned and Subtly Imagined” spotlights the layered monoprints of Carolyn Shattuck and the playful pottery of Boyan Moskov. Their works demand — and reward — individual attention. But Shattuck’s three-part suite combining recognizable forms with scratchy squiggles, and Moskov’s nine patterned ceramics of various shapes and sizes, gain nuance from the array of pieces accompanying them in three small rooms.

Many of the other artists included in this 22nd edition of FSG’s annual winter show are well known in Vermont. They work in a range of styles and traditions, including landscape, botanical and ornithological studies, found-object collage and free-form abstraction. The combinations make up a medley that enhances each of its parts.

Dianne Shullenberger’s and Kathleen Kolb’s scenes of Vermont’s seasons are paired in one room that also displays similar but looser renderings of fields and forests by Bonnie Acker.

Shullenberger has painted a stream bordered by autumnal colors, along with two close-up views of slender trees — one with budding branches and the other with boughs that are becoming bare. Kolb’s almost-photographic exactitude is beautifully demonstrated here, even when we’re being presented with a digital reproduction rather than an original work. That’s the case with the print of Kolb’s painting of a tangle of leaves, a mossy log and newly bloomed lilacs. Acker’s oils on paper progress from a realistic depiction of puffy trees seen at a distance to a fuzzily impressionistic interplay of cloud and hill, and then to a larger-scale composition in which the artist applies splotches of purple, aqua, lime and beige to hint at field, pond, trees and sky. It’s like seeing Monet starting from water lilies and winding up with washes and dabs of pure color.

Acker’s work in this show acts as a bridge leading from the realistic works, such as David Maille’s wood-panel paintings of rivers and rocks, to the abstract exercises in shadings, textures and patterns by Dick Weis, Catherine Hall and Gail Salzman. Kelly Holt’s four small, white-on-white, mixed-media compositions — collectively titled “Lost Trees” — play a similar role. The distance isn’t great between her dreamy suggestions of snowstorms and Weis’ whirling white vortex, but it is analogous to the difference between, say, a Turner seascape and a Frankenthaler stained canvas.

An avian strand also helps tie the show together. Don Hanson is represented by a haunting study of a horned owl, as well as by “Three Ravens and Four Flying,” in which the birds stand proudly side by side in the top register of the painting, while they wing away gracefully in the horizontal band immediately below. Each of the pieces in Shattuck’s series also contains one or more birds.

Her three “Kothbiri” images include an undulating form that can be read as an elongated female torso: sensually curving hips, breasts and buttocks. Seashells are present, too, in these cryptic but harmonious combinations of lines and designs.

Moskov, a New Hampshire-based potter born in Bulgaria, introduces contrasts in both mood and medium to a show dominated by serious-minded painters. He has come to the gallery to entertain as well as to impress visitors.

Some of Moskov’s ceramics are incised with hatchings reminiscent of the accent marks that Keith Haring often used to convey movement by his graffiti figures. One piece has a rounded orange base and a tall neck with thin, black-and-white rings that resemble the jewelry worn by women with distended necks in Burma and parts of Africa.?

While they readily serve as decorative objects, Moskov’s pots could also be put to practical use — a few have spouts or lids. But for this particular potter, funk takes precedence over functional.