Art Review: 'Birding by the Numbers,' Birds of Vermont Museum

Most art shows can be viewed without particular attention to their settings, but "Birding by the Numbers" is inseparable from its locale. The Birds of Vermont Museum in Huntington organized the community art exhibit to celebrate its 30th anniversary. The show's avian depictions, whether sewn, painted, photographed or sculpted, sit comfortably amid the museum's permanent collection of carved-wood birds, not far from the live versions crowding well-stocked feeders outside.

"Birding by the Numbers" honors two main attributes of this small but extraordinary museum. The first is the artistic skill evident in the life-size carvings that founder Bob Spear painstakingly created, etching each feather with a fine-tipped wood burner. The second is the sheer number of them — 497 — that Spear completed before his death in 2014 at the age of 94. Most of these sculptures are mating pairs of individual species. That means Spear, a self-taught carver, familiarized himself with the habits and postures of approximately 250 avian species that live in or pass through Vermont. 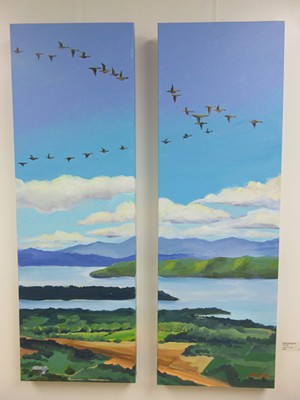 Numbers are key to ornithology, notes Kir Talmage, the museum's outreach and IT coordinator, who devised the theme of this year's exhibit with museum educator Allison Gergely. (Previous shows include "Birds of a Fiber" and "In Layers: The Art of the Egg.") In their call to artists, the women cited some significant numbers in birding, such as the fact that barred owls rarely roam more than six miles from their nests, or the nursery-rhyme assertion that it takes "four and 20 blackbirds" to make a pie fit for a king.

The artists' responses to this intersection of ideas range from literal to literary. South Burlington fabric artist Carol McDowell created a small quilt showing hands cupping a heart-shaped gathering of 30 different species of birds in silhouette. She sewed its rosy-hued background with their names in cursive, including osprey, cardinal and loon. Carol Talmage, Kir's stepmother, contributed "Thirteen Ways of Looking at a Blackbird," which consists of three small watercolors interpreting the first three stanzas of Wallace Stevens' highly visual 1954 poem of the same title.

The exhibit also contains a pleasing ink-on-paper work by Colin Talmage, Kir's brother, depicting a bevy of flying birds, their wings uplifted, arranged in an abstract flow. Kir notes that, though she and the museum's executive director, her sister Erin Talmage, were involved in choosing works for the show, both abstained when it came to family members' submissions.

In a suggestively narrative installation by Katherine Guttman, titled "Crow. Counting.," four black crows made from felt perch on or hover over an antique typewriter. They appear to show a minatory curiosity about the sheet of paper rolled in it, on which a variation on the traditional children's rhyme about magpies (or crows) has been printed in caps. In this case, the familiar words "One for sorrow, two for mirth" are followed by four crows for "death" and "ten for the devil's own self." One bird grasps the edge of the paper in its claws, seemingly ready to fly off with it.

Several artists responded with abstract gestures toward numbers. In Carol MacDonald's square-format linoleum-block print "Wholeness," a black crow with one end of an infinity symbol in its beak perches atop its mirror image in white. The white bird's beak holds the other end of the symbol. The Colchester artist began using bird imagery in 1999. While it's not clear when she made this print, in an edition of 100, the image has a powerful resonance in today's atmosphere of racial tension.

Meg Walker, a conceptual sculptor who lives in Charlotte, has two works in the show, both loosely figurative. "Twenty-Five Birds You Have Known" is a wall installation of wire plant hangers shaped into birds in various attitudes and postures. (Walker could fit only 15 of the original 25 forms from this 1994 work on the wall.) With the rounded hooks representing heads, one sculpture looks remarkably like a heron in flight, another like an owl headed straight toward the viewer. Though flat, the work evokes Alexander Calder's three-dimensional wire circus animals in its ability to capture the essence of a form using minimal material.

Walker's other contribution, "Two Birds Sitting on a Line" (1993), features two rough bird forms balanced on a steel frame and dates from the beginning of her "bird phase." According to Walker's website, that piece resulted from a combination of artist's block and a looming exhibition deadline. She was playing with balled-up newspaper and drafting tape when the two bird forms emerged. The contrast between this avian pair and Spear's birds couldn't be greater, yet each represents a valid approach to art making.

As for numbers, the museum has been growing its own. The venue now contains 510 carved birds, with a handful of other artists adding to Spear's collection. More carved species are in the pipeline; two-dimensional placeholders created by artist Libby Davidson indicate their destined positions in a diorama graced by her painted backdrop.

Birds of  Vermont has also installed a brand-new entrance bridge — the original was swept away in a 2013 flood — as well as pollinator gardens and a walk-in treehouse overlooking a stream. If you've been meaning to check out this museum, "Birding by the Numbers" makes a visit doubly worthwhile.