A current ad campaign for the Friends of the Public Garden in Boston declares, "In literature, paradise is usually a garden. Real life, too." Behind that pithy appeal are layers and layers of human history, and the weight that comes with it. For Brooklyn-based Iranian artist Bahar Behbahani, the intricacies of the garden — specifically the Persian garden — as geographical site and metaphor are abundant sources of inspiration.

"Let the Garden Eram Flourish," at Hood Downtown in Hanover, N.H., was curated by Ugochukwu-Smooth Nzewi, curator of African art at Dartmouth College's Hood Museum of Art. Paintings and video from Behbahani's "Persian Gardens" series mine a history that extends much further back than that of Boston, or indeed any American city. And paradise, it turns out, can be complicated.

During her interview with Seven Days, Behbahani met with a group of fifth graders from a nearby elementary school. The gallery guide asked the students what kinds of things inspire artists. "Random things," one suggested. "Things you've done," another offered. "Looking around you," "movies," "books" and "Google" were other suggestions.

Behbahani, who seemed delighted to interact with the youngsters, smiled and added an item to their list: "Places that I played — I played in gardens as a child."

Nzewi uses the word "psycho-geography" to describe Behbahani's expansive abstract paintings. The lush works arise from a singular mixture of her experiences and memories of growing up in Iran, her sensitivity to place, the liminality of being an immigrant, and extensive research into Persian gardens.

"The Persian garden is within our lifestyle," Behbahani said of Iranians. "It's always there. It's a very influential imaginary world in our mind." She explained that the Persian carpet, familiar to Westerners, represents "another form of Persian garden — you feel like you are in your own garden, even if you're poor. You have your own corner of garden in your house."

In this sense, each of Behbahani's paintings can be viewed, like the carpets, as representative landscapes fitted into relatively small plots — just a few feet in dimensions. The painting that most resembles a garden is titled "Let the Garden Eram Flourish," named for the famous 11th-century garden in Shiraz, Iran. "Eram" is a derivation of "iram," the Arabic word for heaven. 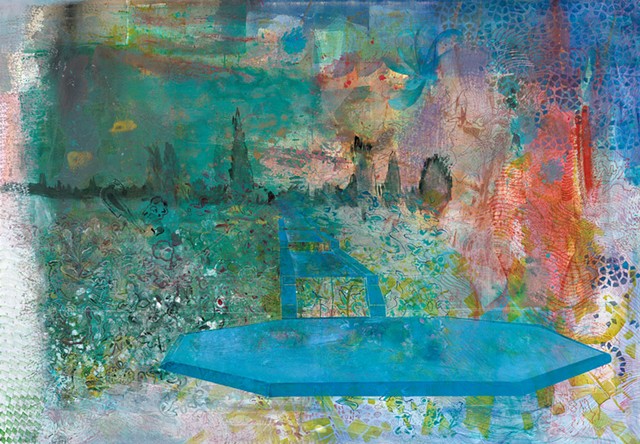 In the painting, a rectangular pool is fed by a tiered fountain, which recedes into a tree-dotted horizon. The jutting straight lines of the pool contrast strongly with the fluid layers of patterns and texture that cover the entire picture plane. Mark making abounds: botanical outlines and formations, lines that suggest topography and thumbprints, the tessellated diamond patterns of Islamic architecture. The scene looks neither cozy nor threatening; instead, it is like a dream in which reality, fear and ecstasy are mercurial, easily manipulated elements.

The pool, a central feature of Persian gardens, is a particularly potent space and symbol for Behbahani. As Nzewi pointed out, the capacity to command water in a desert showcases "the ability of man to domesticate nature" and sends a strong message of power from a ruler. "Those who make the gardens are those with means," he said.

As a veil for the mechanisms of power, Behbahani noted, "[The garden] is a very seductive, beautiful place that can be the cover of some other hidden activities."

Behbahani's studio in lower Manhattan is near the National September 11 Memorial & Museum, and she's spent a lot of time at the site's twin pools, she said. The artist links reflecting pools to the contemplation of loss: "The mass void exists everywhere," Behbahani said of seeking meaning in a time of grief, "and it's a universal void."

In the vernacular of her paintings, rough rectangles and straight lines recur, referencing the pool motif and the human effort to build rigid shapes to hold the intangible.

In her research, Behbahani discovered that the architect of the original World Trade Center, Minoru Yamasaki, also drew up the plans for Iran's Shiraz University, home to the Eram Garden. From this confluence, Behbahani produced "Chronicle of the Garden," a series of eight small abstract canvasses.

What viewers see in "Chronicle" depends on how much they know about Behbahani's inspirations. In one of the paintings, a gray rectangle is set against blue, with a large swath of green in its middle. Looking at the image with New York already in mind, one could easily interpret this as Manhattan and Central Park, which is a garden of sorts. A shaky white rectangle frames the park and surrounding urban territories, echoing the frequent "pool" delineations found elsewhere.

The base of one of the twin towers appears in a much more recognizable form in "Adorned With Pillars," on the opposite wall of the gallery. "Architectural mass is a form of mark making," Behbahani noted.

A significant document that Behbahani explores is Donald Newton Wilber's book Persian Gardens and Garden Pavilions. Wilber was instrumental to the 1953 Central Intelligence Agency coup in Iran. His double life as a spy and celebrated scholar provides a tantalizing — and heartbreaking — instance of the entanglements of the Persian garden with Western scholarship, Orientalism and imperialist violence.

Behbahani draws most directly on her investigation of Wilber in the painting "The Decisions Are Made: Activity Begins." The watery, rose-colored abstraction features outlines of five plant specimens — all native to Iran, the artist said. The lines of an architectural drawing gently frame the top of the canvas. At odds with the feminine fluidity of the work, though, are five solid black rectangles, arranged to evoke redacted text in a document. Wilber's memoir was censored eight times, according to Behbahani.

Also on view is the one-minute video "Visiting You in Summer 2015," a scene shot in the garden of Behbahani's mother's home. The tranquil pool shown there helps ground the dreamlike paintings in a time and place — the life and family residence of the artist.

"Every day is pregnant with so many politics and poetics that I deal with personally," Behbahani said. Looking at her delicate, but never precious, paintings is akin to walking into a mind full of memories and symbols that have taken on lives of their own. Like the Persian garden and carpet, Behbahani's works express a rich cultural heritage and texture of experience — as an Iranian and as a human — within a very small space.