In Vermont Metro Gallery's new exhibit, curator Kerri Macon has once again grouped a handful of talented local artists with varied styles and mediums around a unifying theme. As the title "Back to Nature" suggests, the works celebrate the state's natural beauty. There's certainly nothing new or cutting edge about Vermont landscape painting, yet only some of the pieces here depict the pretty pastoral scenes that typify shows of this sort.

Jill Madden hews most closely to that tradition in her skillfully composed impressionist paintings of waterways and wetlands. Joseph Salerno takes just as familiar an approach in his two series of small studies of trees. Yet the part-time fine-arts professor at Johnson State College turns toward J.M.W. Turner in a set of wider works that are ostensibly on the subject of ridgelines, but really about the properties of light and paint.

As for Karen Henderson's mounted, hand-woven and mixed-media fabric works, if it weren't for the titles, a viewer wouldn't necessarily associate them with nature at all. These textiles are more abstract than representational, more focused on form than on content.

For example, a squall doesn't automatically come to mind when one looks at the piece Henderson named "Squall." With stitching, creasing and coloring, she does conjure the ominous swirls of an approaching outburst of rain or snow. But it's not clear how the beige and purple rectangle at the center of this yarn-and-fabric piece qualifies as part of such a weather event.

"Harvest" could be read as rows of tedded hay converging at the vanishing point on a low horizon that merges into an autumnal haze. Take away the title, though, and this becomes an exercise in one-point perspective and tonal variation. Similarly, Henderson's "Thunder and Loosestrife," in which purplish streaks and flecks pop out from a gray-and-green background, conforms as tenuously to its subject matter as do the renditions of water lilies Monet painted late in his career.

Gowri Savoor introduces an element of playfulness to the earnest artiness on display on the top floor of Burlington's BCA Center. The versatile and imaginative Montpelier-based sculptor and painter is represented here by three assemblages fashioned primarily from painted pine needles. Savoor painstakingly deploys this material in much the same way that the Plains Indians of North America used porcupine quills to make aesthetically engaging utilitarian objects.

Savoor's freestanding "Pine Cube" looks as though it could be a toy chest or a laundry hamper. But it's no more practical an object than is the wall-mounted piece alongside it, which resembles a Southeast Asian conical hat, size XXXL. "Pine Line" — a thin, six-foot-tall strip with a curl at its bottom — might be mistaken for an elongated party whistle awaiting a toot from some jolly giant.

Salerno's ridgeline series departs in a different way from many of the works in "Back to Nature" — including some of his own. The sunlight in a couple of the ridgeline paintings is alarmingly bright. Such solar storminess produces a sense of unease that actually comes as a relief in a show dominated by tranquil images. Unlike most of the pieces by the three other artists, Salerno's ridgeline paintings twig to the agita in nature. The vague shapes of cows or sheep plodding along a couple of his ridges are likewise unique in a show otherwise devoid of animal life — or buildings, for that matter.

The highlight of "Back to Nature" is another creation of Salerno's: a tight grouping of 12 small oil paintings with the collective heading "Woods." The titles have dates appended, indicating that all the pieces show either autumn or winter scenes. With this series the artist reveals himself to be a convincing visual trickster. 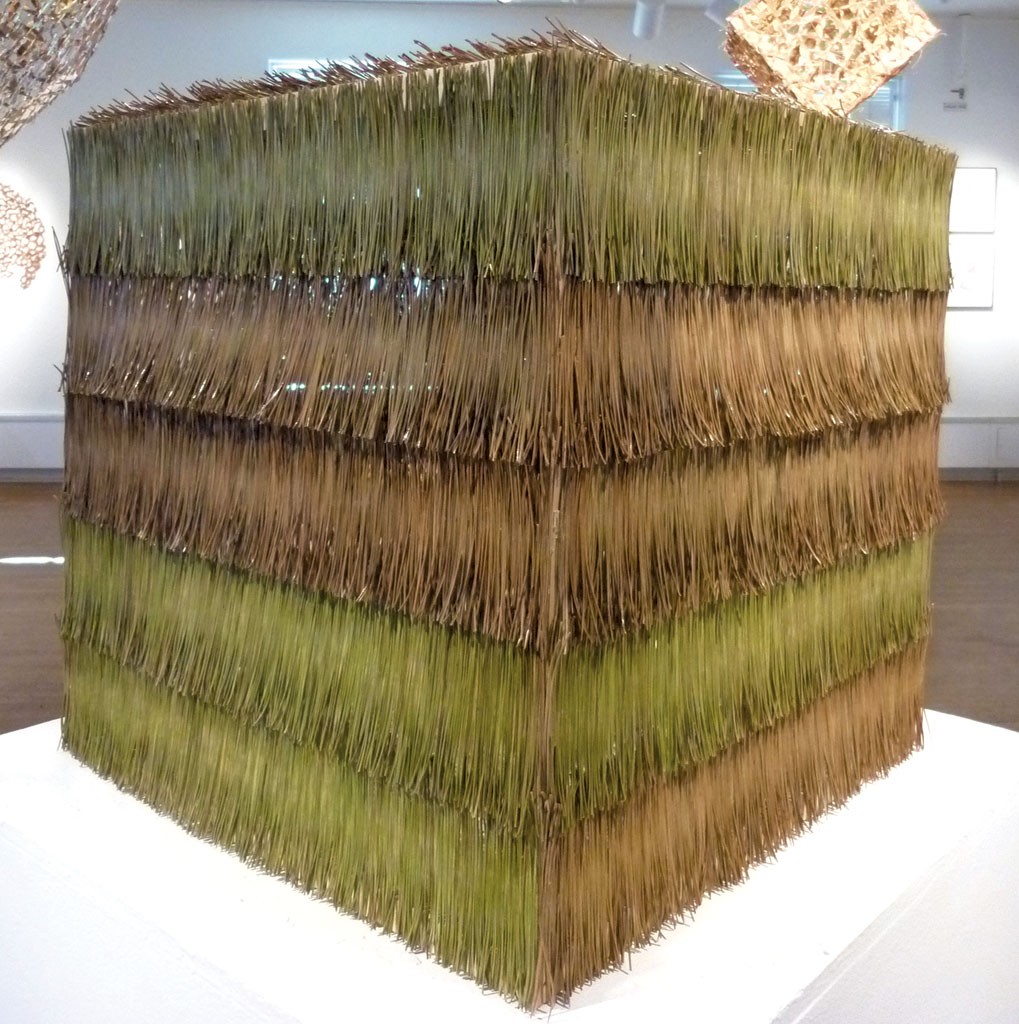 Viewers may think at first that the tree trunk at the center of each "Woods" painting has been carved or scratched into the canvas. In fact, their starkness is a product of thick applications of paint that produce unsettling portraits of tree-as-phantasm. A couple of these pieces look like details of a horror-movie poster.

Madden works in a manner similar to Salerno in that she paints essentially the same scene again and again, from an only slightly shifting angle. She introduces variety by depicting the changing of the seasons and the passage of the sun across the sky.

Some viewers will likely find Madden's large-scale, brightly colored renderings of Addison County streams the most appealing pieces in "Back to Nature." It's easy to become captivated by the dabs of green, blue, yellow and orange in the alternately cool and warm palette the artist employs in these soft-focus compositions. Madden is the uncontested crowd-pleaser here.

She's also the creator of the show's outlier. "Orange Tree" has a wall all to itself, adjacent to the gallery's elevator and stairway. Madden's close-up view of the tropical tree's leaves produces a density that's offset by her blurred treatment of the fruit. It's a nature scene, all right, but certainly not one to be glimpsed in the Green Mountain State.

The original print version of this article was headlined "Outside Artists"