Vermonter Thomas Waterman Wood believed that art is important to society. In 1895, the nationally recognized Montpelier artist donated 42 paintings and etchings to found a museum in the city. He wanted Vermonters to have access to art.

The resulting T.W. Wood Gallery was one of Vermont's first museums. After the Great Depression, it gained the added distinction of becoming the official Vermont repository for artwork made by the state's Works Progress Administration artists.

When the museum's visual arts committee met to choose exhibit themes for this year's 125th anniversary, these ideas of art accessibility and cultural heritage figured prominently. One of the themes they chose was the relationship between art and social justice.

"It's a way to show the long history of Vermonters engaged with things they care about and working hard for things they believe in," said Margaret Coleman, the Wood's executive director.

"I was confident from her talk, 'History of Activist Art in Vermont,' given last year at the Fleming Museum in Burlington, and all the work she's done on art and activism, that she was perfect for this," Coleman said.

Indeed, berger has for years employed painting, printmaking, multimedia and performance art to educate and create dialogue around social issues. She stepped into political organizing in 2003 with an antiwar fundraiser in Burlington called Give Peace a Dance.

After completing a self-designed major in community art and social change at Burlington College, berger joined the Peace & Justice Center staff in 2006.

"Organizing and education around antiwar became the forefront of my day and life," she said.

But it wasn't something she could leave at the office, and painting helped her deal with the heaviness she felt.

Berger went on to earn a master of fine arts degree in interdisciplinary art from Goddard College. She now works in her own studio and teaches at Champlain College and the Community College of Vermont. In January 2019, she launched At the Root, a community-engagement and project-management venture intended to support social justice work.

"Curating this exhibit was an additional way I could explore the role of art in social justice and politics and bring something together to share with my community," berger said.

After reviewing the Wood committee's vision, she contacted artists and activists with whom she'd previously worked, as well as others they recommended. As people responded, the show took shape with a focus on photography, computer-generated works, posters, banners and contemporary art.

"The diversity demonstrates there are many different ways art can have power and purpose in our political lives," berger said.

Burlington artist John Douglas contributed seven photography and computer-generated pieces, including "Auto-Warming," an 80-by-36-inch image printed on Plexiglas. In it, submerged cars, oil-drilling platforms, a tanker, airliners and a city skyline are silhouetted against an orange and yellow sky. The acrylic surface, he said, "gives it remarkable clarity."

Douglas said the idea for the image came to him as he was returning home from a visit with his daughter in western Canada.

"I saw more cars at the Calgary airport than I'd ever seen in one place, and I began to imagine all those cars underwater," he said. "This is what the future can look like, unless we get ourselves and our relationships working together." 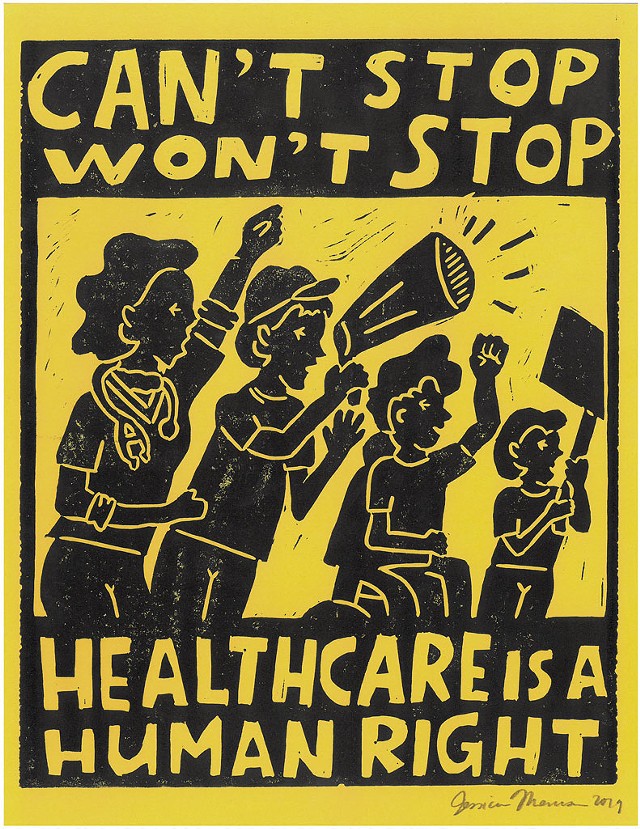 An adjacent wall is dedicated to posters, including six prints by Burlington artist Jessica Morrison. Her 8-by-10-inch linocut block print on yellow paper, titled "Can't Stop Won't Stop, Healthcare Is a Human Right," was originally made for a fundraiser for the Vermont Workers' Center, where she is a member.

The print includes characters that recur in her work, Morrison said. The nurse highlights the voice of health care workers as leaders in the movement and the need for a health care system that values its workers. The person holding a megaphone represents organizers who bring people together. The individual in a wheelchair represents the importance of the disabled community. The child reminds us that "children aren't in the way, they are the way," Morrison explained.

"The biggest thing I want to contribute to the exhibit is how important it is for an artist to be part of an organization and a movement," she said. "The commitment of belonging and participating provides an understanding of where the movement is going, and the resulting art is a living piece of what's happening."

Banners are included in the exhibit, as well. "Banners provide an identity to people working together and to those who witness the work," said Joseph Gainza, who loaned seven from his collection. Gainza retired in 2009 after 14 years as Vermont field secretary of the American Friends Service Committee. Made by AFSC volunteers for programs in the 1980s through 2000s, they include "Vote for the Freeze." It promoted the group's 1980-81 campaign in which 177 Vermont towns passed a nuclear freeze resolution.

"Art, of which banners are a subset, moves people beyond a rational level, helps them break through denial and rationalization, and touches their heart," said Gainza. The Marshfield resident now runs Vermont Action for Peace, which he founded after retiring. 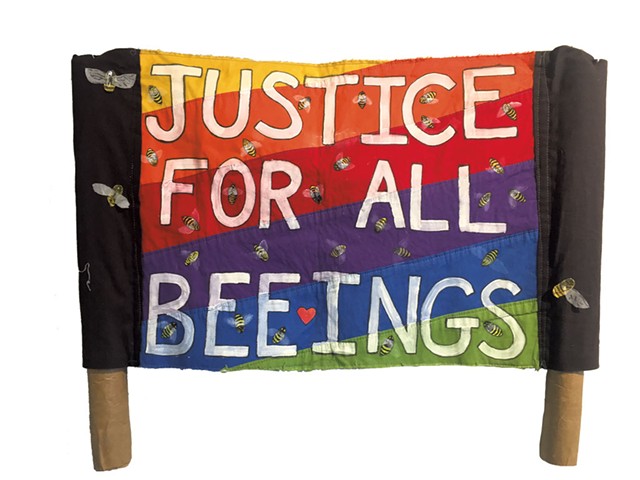 An eighth banner, "Justice for All Beeings," was created by Burlington polymer clay artist Marie Davis for her participation in the 2017 Women's March in Washington, D.C. About two feet square, it's constructed of fabric strips sewn together, lettered in acrylic paint and decorated with fabric bees attached with safety pins.

"I want this show to make people think about the issues and about the role art plays." jen berger tweet this

Berger's 2D mixed-media work "This Is Not Normal," completed for the 2019 South End Art Hop, is displayed with the contemporary works. Constructed of plywood, Plexiglas, paper and spray paint, it features excerpts from the United Nations' Universal Declaration for Human Rights and from August 2019 immigration headlines. Berger noted that her inspiration for the piece was a painting titled "Freedom of Speech" by Englewood, N.J., artist and writer Faith Ringgold. "I wanted to address the hypocrisy of what was going on in our immigration policies," berger said.

"We as a society are undereducated about the multiple ways art can and does play external and internal roles in our political life," she said. "I want this show to make people think about the issues and about the role art plays."

The original print version of this article was headlined "Picturing the Revolution | "Art and Social Justice," T.W. Wood Gallery"