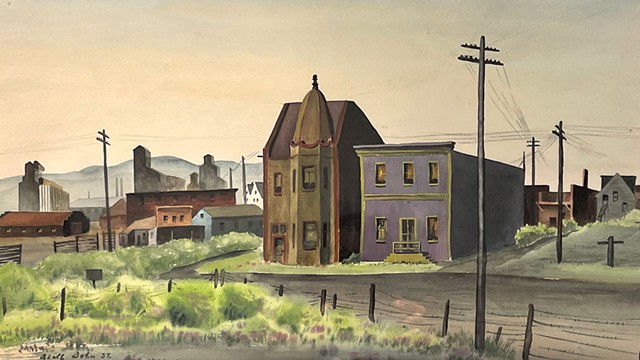 The summer exhibition at the Bundy Modern in Waitsfield combines work by two very different deceased artists: Adolf Dehn (1895-1968) and Virginia Dehn (1922-2005). The two were married but far apart in age, and their careers cover different eras; Virginia's earliest painting on display here was made the year Adolf died.

Each artist developed alongside the major movements of his or her era without being central to them. Adolf's career took him from making lithographs in the 1920s in avant-garde Vienna and Paris to perfecting watercolor landscapes just as American art switched its attention to abstract expressionism. Virginia painted alongside Adolf in New York in the 1950s, influenced by Mark Rothko and Arshile Gorky. But, unlike Joan Mitchell, Helen Frankenthaler and a handful of other female contemporaries, she didn't forge her own career until widowhood.

He was surrounded by the vanguard of modernist thought. tweet this

The Bundy's foyer contains Adolf's rural (and some industrial) scenes in watercolor, stacked salon-style, dating from the late '30s through the '60s. Around the corner, nine of his lithographs and ink drawings are propped along the floor of the spacious main gallery. The earliest of these, an ink drawing from 1926, is a humorous representation of a wealthy couple sitting on a bench.

Most of the main gallery is taken up by Virginia's large, abstract acrylic paintings — some as large as 62 inches square — that date from 1968 to 2003. The later ones incorporate substances such as glue and dirt that give the paint a tactile-looking, three-dimensional quality.

While the title "Landscapes & Inscapes" loosely draws the show together, viewers will be struck by the divergence of the two artists' approaches and the variation within each one's body of work.

Virginia has two pointillist works, in which tiny brushstrokes cover every millimeter of the canvas. These are a far cry from her abstract geometric canvases or the flat-perspective, flowerlike forms on a solid brown background in her 1992 painting "Chords."

Adolf's range of experimentation is clear from the contrast between two works: a 1961 surrealist-influenced pen-and-ink drawing, "Haitian Composition," and the circa-1960 casein-on-masonite "Central Park Snow." The latter is a traditional scene depicting New York City skyscrapers in silhouette rising above a snow-covered park.

"I would never show [Adolf and Virginia] together except that they were married," commented Wendell Anderson, who owns and curates the Bundy with his wife, June Anderson. The couple also resides there, having converted the back parts of the midcentury gallery to living space. The building was designed by Harlow Carpenter, whose major influence was Le Corbusier. 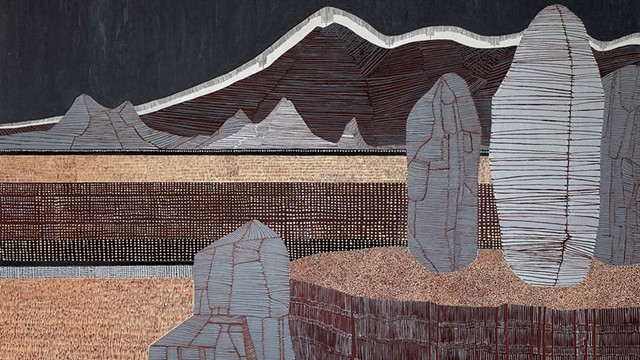 Visitors to the Bundy often recommend artists to the Andersons for future exhibitions, Wendell said, but the couple rarely follows up. With the Dehns, it was different. Virginia's nephew, Andrew Lowe, is friends with the residents of the nearby house in which Carpenter lived while designing the gallery. Visiting their neighbors one night, the Andersons heard Lowe tell of his exotic aunt, who was 26 years younger than Adolf when they married in 1947. Both artists' output is now stored in the Lowe family's Connecticut warehouse, where the Andersons went to select the show.

The Andersons have found the Dehns' story as interesting as their art, scouring the internet for historical sources. Among their finds are a 1941 LIFE magazine that features Adolf in its centerfold and a copy of the artist's out-of-print book on watercolor technique. The Lowes provided other sources, including Virginia's handwritten memoir and a catalogue raisonné of Adolf's prints. All of these are available for perusal in the foyer, along with copies of a scholarly article about Adolf by Case Western Reserve University art history professor Henry Adams and a review of an exhibition of Virginia's work by Teri Thomson Randall.

According to June's research, Adolf grew up the child of a "very poor and morosely hardworking" immigrant German couple in Waterville, Minn. His father was a hunter and trapper, but with the support of his mother, Adolf managed to attend the Minneapolis School of Art and Design from 1914 to 1917 and then win a scholarship to the Art Students League in New York City. After a year at the latter, he was drafted. Adolf's choice to become a conscientious objector led to his semi-imprisonment until the war's end, according to Adams. 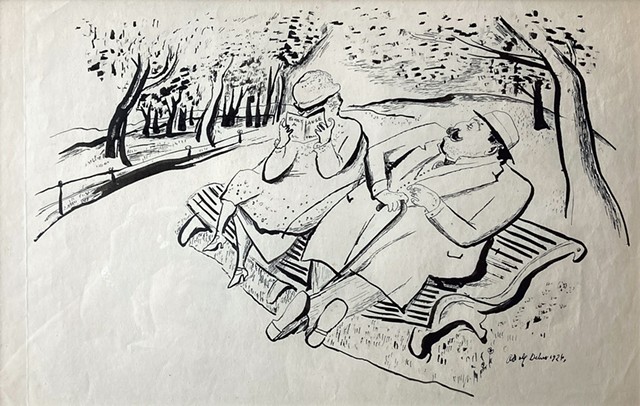 From 1922 to 1929, Adolf lived in Europe — mainly Vienna and Paris, with stints in Berlin and London. In Vienna, he began to make lithographs influenced by his friend George Grosz that depicted humorous and risqué scenes of street life. He worked as a personal assistant to Scofield Thayer, the wealthy poet from Massachusetts who co-owned and edited the Dial from 1920 to '29. That American literary magazine published key early modernist works by W.B. Yeats, T.S. Eliot and others.

Thayer had also begun buying modern art by the likes of Gustav Klimt, Egon Schiele and Pablo Picasso for his collection, which would one day be renowned. One of Adolf's jobs for Thayer was to supervise a portfolio of reproductions of modern art.

"He was surrounded by the vanguard of modernist thought," June commented during a phone interview. Thayer deeded his valuable art collection to Adolf, she added, but the wealthy aesthete outlived his former assistant. (Adolf died at age 73 of a heart attack, Thayer 14 years later.) The Scofield Thayer collection is now held by the Metropolitan Museum of Art.

The lithograph techniques that Adolf developed during his time in Europe had "widespread influence," according to Adams. No less influential was the artist's approach to watercolors, which he took up in 1936. Three years later he won a Guggenheim fellowship to travel around the U.S. creating watercolor paintings, which were featured in a five-page spread in that 1941 LIFE issue. The exposure brought Adolf national fame.

In 1941, he painted what would become his best-known watercolor, "Spring in Central Park." Owned by the Met, the popular image has been reproduced on everything from tote bags to mugs. 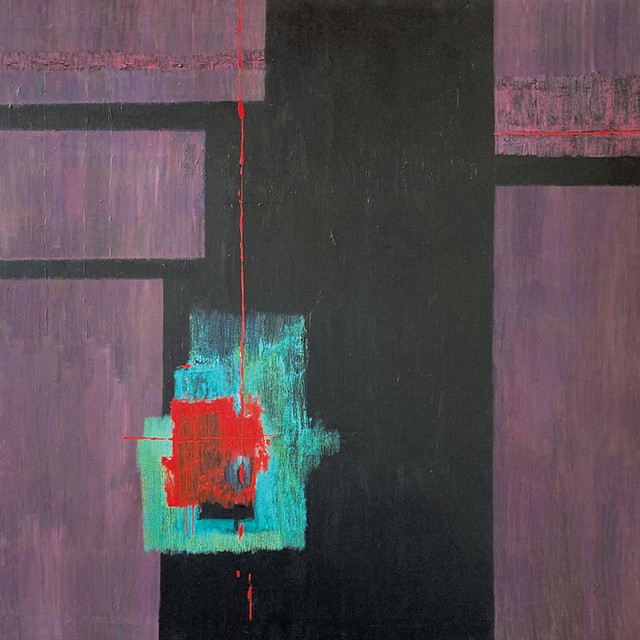 By 1945, art critic Lloyd Goodrich classed Adolf with Winslow Homer and Edward Hopper. His 1937 watercolor "Sunday Morning (Colorado)," displayed in the Bundy show, indeed has a Hopper-esque feel with its blank windows and stark telephone poles.

Other influences are evident in Adolf's watercolors, including those of regionalists Thomas Hart Benton and Grant Wood. All three were represented by the Associated American Artists Gallery in New York City, whose roster Adolf joined in 1938.

In 1943, Adolf met gallery assistant Virginia Engelman, whom he married four years later. Born in Wisconsin, Virginia grew up in Connecticut after her father took a position teaching at Yale University. Like Adolf, she had attended the Art Students League; during their courtship, the two frequented the league's summer home, the Woodstock Art Colony. While married, they attended the Yaddo artists' retreat in Saratoga Springs, N.Y., with their friend Milton Avery, a pioneer in abstract painting.

The Dehns' marriage seems to have been defined by their travels abroad for Adolf's work — to Cuba on a second Guggenheim, Haiti, the Yucatán, Italy, Greece, Turkey, Iran, Afghanistan and India. Standard Oil of New Jersey hired Adolf to make art in Baton Rouge, La., and Venezuela.

"She never wanted to be a bourgeois housewife," June said of Virginia, adding that the Dehns had no children. "She admitted she was not an artistic firebrand, [either]. But they shared a Midwestern background."

While Adolf was successfully turning out scenic watercolors of the couple's travels, another American artist influenced by Benton was coming to prominence on an entirely different path. That was Jackson Pollock, who, with Rothko, Willem de Kooning and others, charted a new course for art, in his case with spontaneous, abstract, gestural applications of paint. The art world took note.

"[Abstract expressionism] was so masculine, so virile, so postwar America," June said. "It became what was important for the next three decades. So anyone who was doing barns and charming rural scenes became unfashionable, which is what happened to [Adolf] Dehn."

Virginia began painting daily after her husband's death; she established herself in Santa Fe, N.M., in 1986. Her least abstract landscape painting at the Bundy, "Sentinels" (1992), appears to represent the dramatic vertical rock formations of the Southwest. But she never gained her own fame, according to June.

"She had quite a few shows, but at small museums. I don't think she was really recognized," June said. "She never stopped working, never married again — though she had plenty of lovers. She sounds like a ... firecracker, someone who knew what she wanted."