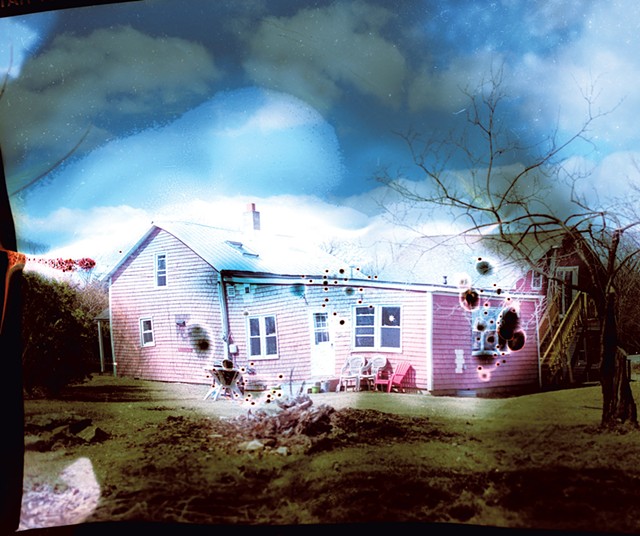 All art is, in some way, about line crossing. Even the most placid landscape painting or haphazard snapshot privileges the artist's hand and imagination over the "real." As if to emphasize this need to cross boundaries, we use the word "transcendent" as a high compliment of creative output.

Artists' statements identify in relatively plain terms which boundary each work addresses: Some are political borders, others dichotomies between public and private, or past and present.

McCadden's installation of ordinary furniture and household items is arranged in a tight cluster at the back of the gallery. These objects, taken from her home, are emblazoned with excerpts from McCadden's award-winning poetry collection Landscape With Plywood Silhouettes. The combination is surprisingly profound, largely because of her skill as a poet.

For "Oak Dresser: Bone China," McCadden has placed segments of the poem "Bone China" in the drawers of a dresser that once belonged to her grandmother. To read the poem, a viewer must open and close the drawers from top to bottom, combining a mundane physical action with new discoveries. McCadden's narrative is about the rupture of divorce.

In "Wall Light: How to Miss a Man," an illuminated, wall-mounted frame features a poem excerpt whose subject matter melds the lake as a physical boundary, sewing as a barrier mender and the precise lines of a graph. McCadden writes, "You need to be a graph. A grid. Numbers are perfect. You can draw two / lines on a graph that can never touch. This is what you are building."

McCadden's choice to place text on domestic objects dissolves the boundaries between the artist's physical and emotional interiors.

Arnold and Savoor have assembled works that roam widely among geographical and emotional landscapes. tweet this

A few other artists extend, in one way or another, this vein of domesticity through the show. If furniture can be "queered," Arnold has done it with "Sunday's Best," a six-foot-tall anthropomorphic sculpture made of furniture components. The bipedal figure stands defiantly atop a plush footstool, boasting lace and tassel accessories and a very large chair-leg phallus. The work is sexual and strange, and joyfully flaunts its rejection of the principle of furniture as functional object.

In his artist's statement, which reads a bit like a Facebook rant, Arnold proclaims, "The main focus of this work is to bring a poetic, three-dimensional narrative that states, 'Do not fear different religions, skin tones, sexuality, and the corporate police state that has set the boundaries...'"

The work that most closely approximates a literal boundary is Arnold's "Do Not Cross," which looks like four wooden folding chairs piled together and stretched to the sky. The "seats" of the bench-like sculpture are high enough that viewers can pass under them, if they dare to cross.

Such feisty goading plays into Arnold's "The Times," as well. A hollow trunk of translucent plastic approximately three feet high and four feet long has been locked with a small golden padlock — a Pandora's box begging to be opened. The contents — if any — remain a mystery.

Home is the subject of Zompetti's series of altered photographs. In "Grand Isle Home #1," the artist's bright-pink 1875 farmhouse stands out against a blue sky. Rather than present the photo as a "pure" document, Zompetti has manipulated the negative so its perspective is wavy, and sprinkles of small, red-edged dots make the house seem about to burst into flames. Like memory, the image is fickle and in flux.

Scrag Mountain Music cofounder Premo offers "Reflection," a musical composition about the absence — or destruction — of home. It was created shortly after Hurricane Katrina, which Premo's statement describes as "a time when the borders of land and sea were all but eliminated." Played on the double bass, the piece evokes both wistfulness and hope.

Two paintings by Swift, "The Skills You Need: How to Use a Cross-Cut Saw" and "The Skills You Need: How to Use the Hammer," face each other across the gallery. They feature enlarged renderings of instructional diagrams for using household tools, on a background of deep-yellow rectangles. Juxtaposed with the contemporary color field, the universally recognizable didactic images become absurd. A sharp line of color contrast separates each paired diagram and color block.

Galligan-Baldwin employs a similar compositional technique in two of his acrylic paintings, titled "Journey #4" and "Journey #5." Here the dominant color fields are a cloudy teal and a dusty pink, respectively. Razor-sharp slices of color — in a palette of jawbreaker-esque pastels — occupy the canvases' top third. For this artist, a Norwich University assistant professor, the hard line between fields is transmutable, however. In each work, one small drop of the paintings' top motifs descends into the monochrome field that takes up their bottom two thirds — suggesting rebellion, or perhaps happenstance.

In Henderson's subtly hued stitched and woven fiber art, a defining element of landscape and horizon invokes the line-as-boundary. The Montpelier artist's 40-by-70-inch mounted "Storm Lifting" consists of five heavily stitched panels sewn to a larger panel depicting hazy gray mountains. The poetic implication is that earth and sky are connected by needle and thread. The work's rough symmetry makes it hard not to think, As above, so below.

Cheney complicates any meditation on hard lines. Her approximately 10-foot-square wall-mounted collage "The Day That Wasn't Yesterday" is a feast of color, edges and textures. The Middlesex artist has torn up previously painted canvases and layered them in a wild remix. The work is unified by its own logic of disarray, shot through with orange and black lines; an imposing circle of navy paint dominates the lower right quadrant. 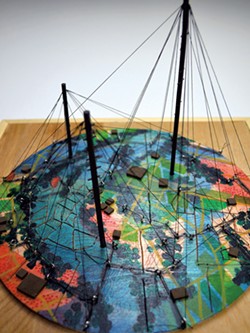 Cartography is a source of inspiration for both Moore and Savoor. The new director of Helen Day Art Center in Stowe, multimedia artist Moore distills the topic of geographical boundaries down to stark street maps in "Michail Psellou." It is drawn in thick black lines on layered, translucent vellum. Her statement explains that these are streets with which she became familiar during a stint in Thessaloniki, Greece, in 2009-10.

In contrast, Savoor's territories are three-dimensional and brightly colored. The sculptor has long used elements found in nature to create evocative wall-hung and installation pieces. Here she deploys the conventions of map making to construct what appear to be imaginary places. In "Diaspora," an undulating surface of blue, 3D-printed plastic pins of various heights, with heads the size of gumballs, is attached to a wall-mounted board. The pins rise from a fluid topographic landscape painted in pink, purple, blue and gray. The piece suggests infinite change and movement.

Arnold and Savoor have assembled works that roam widely among geographical and emotional landscapes and demonstrate that the two can be inseparable. The territory explored here can feel overwhelming. Overall, though, "A Journey Across Boundaries" reminds us that humans have an inherent need to categorize. For better or worse, the constant identifying, imagining and crossing of lines is a bedrock pattern of our lives — and a rich terrain for artists to explore, interpret and disrupt.