An introduction to this year's Art at the Kent exhibition, "20/20 Hindsight," notes that "the buildings that still stand at Kents' Corner are part of an original place of industry." In the 19th century, this crossroads in Calais resounded with the busy operations of a shoe and harness shop, a brickyard, a blacksmith, and a sawmill.

Art at the Kent cocurators Nel Emlen, Allyson Evans and David Schutz, who is also the state curator, have always kept their historic venue in mind while hanging the annual monthlong show of contemporary work by Vermont artists. Their installation choices in the quirky building, which was once a general store and tavern, are often dictated by its unfinished lath walls, old wallpaper patterns and still-visible handwritten ledgers.

The curators chose artists whose work specifically honors the "makers" of the site's heyday. tweet this

For this 13th edition of the exhibition, the curators chose artists whose work specifically honors the "makers" of the site's heyday. Roughly 250 pieces by 20 artists fill the rooms and surround the building. Some artists depict hand or machine tools in their work; others repurpose antique tools, use traditional skills to produce modern-day art or reference artifacts found on the site.

Some works may look familiar: "20/20 Hindsight" was also the title of last year's show, mounted primarily outdoors due to the pandemic. This year's version is the one intended for 2020. It includes remounted works from last year, such as Montpelier artist Chris Jeffrey's "In a New Light," an old window frame filled with colored light filters; and Bradford found-object artist Cindy Blakeslee's "#146," a four-foot paintbrush whose bristles she made from old maps shredded in a pasta machine.

Jeffrey has worked with colored light filters for the past four or five years, he explained at the exhibition's September 11 reception. The discs of various diameters are precision-made for high-tech imaging equipment used in medicine and space exploration.

For "Untitled," Jeffrey mounted three groups of filters, in pink, yellow and blue, on a black-painted horizontal board. Much like his three-dimensional "strip" paintings, made of narrow strips of wood layered into geometric patterns, this work requires the viewer to observe it from the side as well as from the front. Moving between the two vantage points alters the play of light and reflection so that the piece never quite resolves into a stable work of art.

One realist painter in the show is Heidi Broner of Calais, who depicts workers on telephone poles and construction I beams. Another is Kate Gridley of Middlebury, in whose nearly trompe-l'oeil paintings old tools seem to take on personalities.

Gridley's "Bittern" depicts a line of iron trowels, tongs and screws propped against a wall. With its sharp focus and seeming depth, the image at first gives the impression that the objects are standing against the real fireplace mantel on which the painting sits. A few of their forms appear to mimic birds, which presumably accounts for the title. 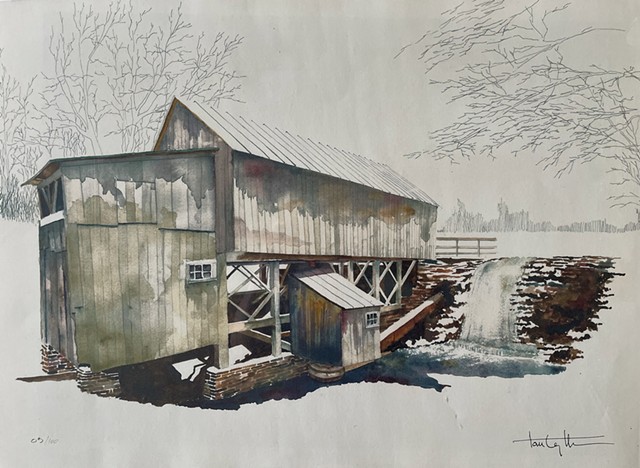 Montpelier watercolorist Tom Leytham's precise renderings of distilleries, equipment, mines and mills — including still-functional Robinson Sawmill just down the road — complement nearly every room. Many of these works appear to be fragments of a scene. Leytham's "1963 Massey-Harris Tractor" verges on abstraction, its fragment of a wheel mostly white paper. Other works, such as "Saddle," are complete renderings with the detail one might expect from an artist trained in architecture.

Toussaint St. Negritude of Newark is a gay Black poet, a former poet laureate of Maine (2015-17), and a bass clarinetist and jazz composer. He makes and wears his own extraordinary hats, a selection of which adorn a small upstairs room. Partly a riff on Black women's tradition of wearing flamboyant hats to church, the samples on display take every possible shape — a four-pointed closed crown in recycled leather and cowrie shells, a fascinator with a spray of feathers, a fur cloche.

St. Negritude writes in his colorful artist's statement that he is "a hatmaker of poems." His poem "How I Built My Star House," posted alongside, begins: "It started / with making poems [...] Then it began to flourish / through the making of hats / Through the creation of crowns / anointing each vision I grasped / turning poems into high-feathered hats."

A complementary display of shoes adorns the opposite wall. A 19th-century child's shoe found in the building's wall during an insulation project in the 1980s accompanies a life-size drypoint etching of that shoe by Colchester artist Carol MacDonald.

The Kents' Corner shoemaking enterprise inspired MacDonald to create her series "Footprint," which fills a room above the old general store. Better known for her meticulous drawings and prints of loose knitwork (some of which hang in the show), MacDonald drew pairs of her own shoes — clogs, boots, heels — in colored pencil on large vertical sheets of handmade paper. Then she trod on the paper wearing those same shoes, the soles coated in a mixture of paint and ground dirt. The footprints her two granddaughters made on portraits of their smaller shoes remind viewers of "what we are passing on to the next generation," MacDonald writes in an artist's statement.

Outdoors, MacDonald's knit pieces adorn the trees. Also sited outside is Christopher Curtis' "The End of Truth," a glacial boulder out of which the sculptor precision-carved a large rectangular void.

Born in Stowe, Curtis maintains studios there and in Barre. A student of Vermont's geology, he sees his work in stone as a way of contextualizing humanity within the sweep of geological time. "The End of Truth" contrasts that arc with the momentary — and necessarily subjective — views that the window in the rock affords.

"My hope is that these stone windows ... invite viewers to ponder their interpretations of what they see," Curtis writes in his statement.

Indeed, the entire show — of which this review covers only a portion — encourages such consideration, as well as admiration for beautifully made things both past and present.