Art for the (Recessionary) Ages 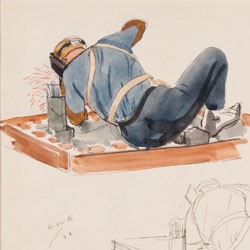 In a startling show on the second floor of its Church Street gallery, Burlington City Arts is presenting a mini-retrospective of the work of Lewis Rubenstein, a versatile and skillful painter who died in Vermont in 2003.

Curator Chris Thompson says he knew immediately he wanted to organize the exhibit once a BCA board member acquainted him with Rubenstein’s depictions of Depression-era workers. The parallels — and contrasts — to today’s Great Recession are striking, Thompson notes. “Rubenstein was documenting what was going on in his time, while now we’re trying to ignore what’s going on,” the curator comments. He describes the current dislocation and destitution of millions of Americans as “a silent train wreck.”

The pieces hung on the Church Street side of the gallery are products of Rubenstein’s wanderings around working-class America, à la another great but much more celebrated American artist: Woody Guthrie.

Following his graduation from Harvard in 1930, Rubenstein composed these expressive drawings, watercolors and lithographs of miners, gleaners, foundry laborers and shipyard workers. They reveal him to be a superb draftsman able to achieve anatomically exact representations of subjects in complicated poses.

Rubenstein was clearly well trained in the European classical tradition. He even learned how to paint Renaissance-style frescoes during a sojourn in Italy, applying that knowledge in a mural created for what’s now the conservation center at Harvard’s Fogg Art Museum. Its imagery is based on what Rubenstein saw while taking part in a “hunger march” in Washington in 1932.

In an essay he wrote in 1974, Rubenstein says his work actually “comes out of a personal fusion of two traditions — European and Far Eastern.” One piece in particular in the BCA Center’s “Legacy” show — the calligraphic and scroll-like “Mining Town” — vividly highlights his interest in Chinese and Japanese art.

The Asian influence explodes into view in selections from the “Creation” series on display in the gallery’s rear room. Visitors will be stunned by the brilliantly colored ink and wash paintings executed in the Japanese sumi-e technique and inspired by biblical passages from Genesis and the Psalms.

In this radical shift away from realism, Rubenstein seeks to convey nothing less than the birth of the universe. A couple of these improvisations have an uncanny resemblance to photos of pulsars and supernovas taken through the Hubble space telescope. Thing is, Rubenstein composed these works starting in 1981 — a decade prior to Hubble’s launch.

Although this grouping of abstractions does qualify as what Thompson calls “works of pure process,” the “Creation” compositions can be deciphered as depictions of what their titles denote. A viewer will readily recognize the fires and floods referred to in the adjoining labels.

A BCA-produced catalog serves to acquaint Vermonters with an artist little known here or pretty much anywhere beyond the campus of Vassar College in Poughkeepsie, N.Y., where Rubenstein taught for almost 30 years. He spent the last 10 of his 94 years at the Wake Robin retirement community in Shelburne mainly because it is close to the home of his daughter, Emily Morrow, and within driving distance of the Ottawa home of his son, Daniel Rubenstein.

“Legacy” includes in its front room a few Champlain Valley landscapes. To many observers they might be the least interesting works in the show because their subject matter is more familiar, their impressionist style more predictable.

Thompson says he chose to hang “Legacy” on the second floor because that’s where “more subtle shows” are typically presented. The gallery’s ground floor is reserved for larger-scale, installation-focused works that are more likely to “reel in” passersby, Thompson explains.

However, those who climb the stairs or ride the elevator to see what Rubenstein wrought will likely find it worthwhile. Hurry, though — the show remains up only until August 13.