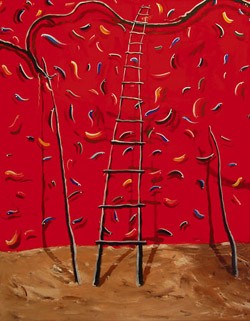 ARTWORK: An untitled painting from the "Exteriors Series" by Danilo Gonzalez

Enigmatic paintings and diminutive installations by Danilo Gonzalez fill the Shelburne Art Center this month, and it's an excellent show rich with odd details. Originally from the Dominican Republic and now living in Vermont, Gonzalez is an internationally acclaimed artist who has exhibited extensively in Europe and Latin America. Although he has created and shown works in a broad array of media, acrylic paintings are his main focus at the Shelburne venue. Among the works are surreal landscapes, strangely flat interiors, faces that seem angry and/or confused, and installations that allow Gonzalez's vision to unfold before a military backdrop.

The works in this exhibition are untitled but are grouped into four series: "War," "Furious," "Interiors" and "Exteriors."

The "War Series" consists of one 28-by-12-inch horizontal assemblage -- a shadow-box frame on the wall -- and several small installations that feature plastic soldiers. In the assemblage, three toy army men are segregated inside their own compartments; the entire image is painted white, and the admonishment "Love, not war" is scrawled beneath the compartments. This is the most literal work in the show. Gonzalez's installations include a jumble of beige and green soldiers, battle casualties heaped into a foot-tall pyramid.

Another installation group consists of small, latched boxes with Plexiglas sides and plastic wild animals -- a polar bear, gorilla, hippo, zebra and elephant -- standing on their lids. Each of the little boxes contains more toy soldiers. Though Gonzalez's ersatz combatants are neat and shiny, their guns and aggressive poses make them sinister. The significance of their physical proximity to wild animals is associative rather than specific.

The large paintings in the "Exteriors Series" are more playful, with details that seem influenced by Hieronymus Bosch. In one bright-red, 54-by-40-inch canvas, and a 54-by-80-inch diptych, trompe l'oeil vines and rickety, Bosch-style ladders cast perfect shadows onto high, vermilion-colored walls. Leaves seem to rain down them. The space in each painting is very shallow. Other paintings in the "Exteriors Series" have blue skies and are somewhat more expansive. Beneath the cloud-strewn sky in one 24-by-48-inch work, a gray hill turns out to be a Bosch-like giant, pierced by small stakes and ladders.

In the "Interiors" series, vines and sticks are painted in the same manner, but are enclosed into claustrophobic compartments. A vertical, 48-by-24-inch painting rendered in red-orange and ruddy pale brown presents the botanical forms imprisoned by 19 rectangular chambers. Other "Interiors" pieces are smaller in scale but also tightly divided into odd rooms with sloping floors and slanted walls.

Gonzalez's "Furious" series includes 20 nonrepresentational paintings on paper; the 10-inch-square, framed works are organized into a five-by-four grid. The dominant colors of the paintings -- yellows, black, reds and grays -- are furiously brushed onto the paper.

He's also arranged six 16-by-20-inch heads, loosely painted on paper, into a group, and five similarly sized heads painted on canvas are presented side by side. The faces of the latter group have the same quizzical look -- uncomfortably perplexed. And no wonder: They are splattered with color and stuck by trompe l'oeil sticks.

Gonzalez's works defy easy categorization -- perhaps we need a new term. Postmodern symbolism? Local art enthusiasts should visit the Shelburne Art Center and decide for themselves. But regardless of label, the adjective "superb" certainly applies.