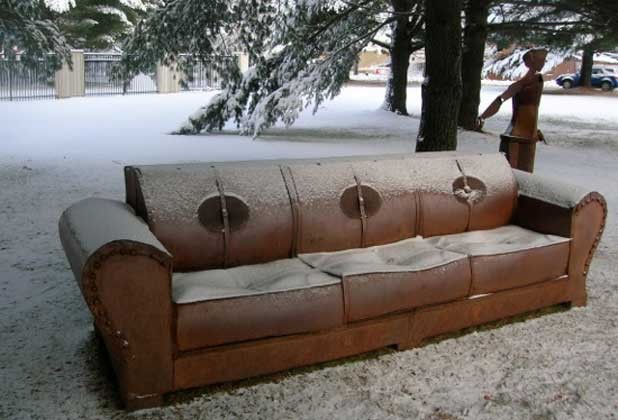 This summer, Burlington City Arts asked us to “Imagine City Hall Park.” Bolstered by a grant from the National Endowment for the Arts to “engage the community in a creative planning process that will result in a visionary master plan” for the park, BCA set about surveying local residents for their suggestions. After processing the feedback, the city arts org is supposed to present a master plan for a spiffed-up City Hall Park by next July.

But we don’t have to wait for an improvement to the recent home of “occupiers.” When First Night arrives in Burlington, revelers will find a park transformed by art.

While the plans weren’t entirely solid last week, there’s no doubt that Clear will be setting up a veritable living room, complete with couch — she’s calling her installation “Vermont Winter Pastoral” — and Liggett will be lighting the scene.

Clear is known for her metal signs and bike racks around town, as well as for her circus-themed pop-up installation last summer in the former Outdoor Gear Exchange space on Cherry Street. She had already created her couch back in 2005 — it was first exhibited in the “Exposed!” outdoor sculpture show in Stowe. At 11 feet long and four feet wide, the couch will be able to accommodate passersby who feel like hanging out on cold metal in winter. She plans to add a chair and ottoman; the pieces will be sited near the fountain.

“I’ve always wanted the couch to be in downtown Burlington,” says Clear, the past winner of BCA’s Barbara Smail Award. “This will be an opportunity for my community to take their pictures with the couch.” She notes that the piece “has been all over the East Coast — mainly at my parents’ house in New Jersey.” Clear concedes that photo ops might be “challenging with the weather,” but is optimistic about public response. And she’s thrilled to be collaborating with Liggy.

For his part, Liggett is reluctant to reveal exactly what he plans to do but concedes his lighting scheme will result in “an aurora borealis kind of vibe.” As there is no outdoor power source in the park, he’ll project lights from the windows of BCA onto the trees, Clear’s sculpture and the park at large. And the lights will move. Liggett, who handles lighting at Higher Ground and for a number of bands, including Grace Potter and the Nocturnals, says he will program “undulating color, things happening.” But those “things” won’t be so wild that they distract passing drivers. “It’s more like colors changing through the trees, patterns,” he says. “It will be really nice when there is snow on the ground.”

BCA itself will be part of the show, says Liggett. “Not only will there be light coming out, but also lights within each floor,” he promises, adding that this part can be turned off when BCA has an event indoors. As of this writing, Liggett says he’s still trying to “wrap his head around” focusing light on Clear’s “living room.”

Whatever the two come up with, it will be on view for two months. “From a curator’s point of view,” offers Thompson, “the idea of a sculpture exhibit is hopefully the first of many. This is sort of nudging us into the ‘Imagine’ thing, of looking at different ways to use the park.”