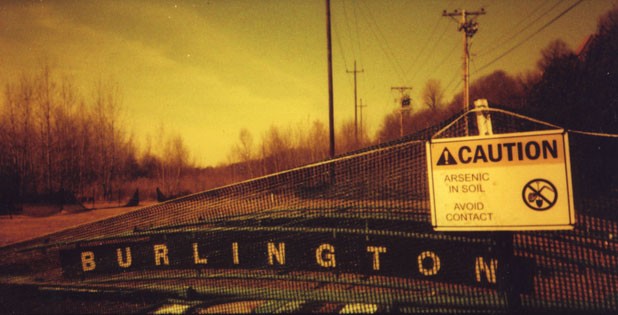 Most people head to the Burlington Bike Path in search of healthy diversion. So it comes as a bit of a shock to see arsenic-contamination warnings posted on a flimsy fence alongside the Community Sailing Center; now that the snow has melted, they’re sure to be seen by anyone who ventures a few yards off the path. Equally incongruous are the remnants of a coal pile that accounts for the poison’s presence there.

The fence and the signs were erected last fall, even though state officials had detected the arsenic nine years earlier. Vermont’s Department of Environmental Conservation didn’t consider the arsenic concentrations, measured at 88 parts per million, to be hazardous enough to warrant action sooner, says Nick Warner, brown fields specialist in the city’s Community and Economic Development Office.

Federal monitors have not established a concentration level at which arsenic in soil is deemed a health risk, says Nancy Erickson, a spokeswoman for the Vermont health department. She adds that the department’s toxicologists cannot comment on the degree of danger posed by the plot of arsenic-laced land near the Moran Plant “because we haven’t seen the data for it.”

The health department’s website notes, however, that the U.S. Environmental Protection Agency recently toughened its protective standard for arsenic concentrations in drinking water, which was already far stricter than the 88 ppm level. The feds’ danger point for arsenic in drinking water is now set at 10 parts per billion after remaining at 50 parts per billion for decades.

Arsenic from the fenced area on the waterfront cannot make its way into groundwater because “it’s an inorganic compound that doesn’t migrate,” says Miles Waite, an environmental consultant to CEDO.

As Burlington’s waterfront made the transition from postindustrial wasteland to a recreational and residential area, officials found arsenic concentrations in many soil samples taken from what was once landfill, Waite notes. It was decided in April 2006 that 35 parts per million would be the arsenic concentration level at which warnings would be posted, Waite adds. He says he doesn’t know why the state waited two years to build a fence and post signs on a site with concentrations of 88 ppm.

Arsenic is found in soil in many places in Vermont, notes Hugo Martinez Cazon, a project manager for the state’s Department of Environmental Conservation. These “naturally occurring” concentrations are a byproduct of Vermont’s geology, he says.

Arsenic isn’t dangerous unless it is ingested, according to the federal Centers for Disease Control. Waite cites a 2006 publication by the centers stating that “walking on or touching [arsenic-contaminated] soil does not pose a health risk.”

CEDO’s Warner says the city has sought to be transparent in its response to discoveries of toxic materials in Burlington’s air, water and soil. “I would never downplay it,” he says in regard to the arsenic-laden land abutting the bike path, “but it is at very low levels.” Warner does acknowledge, however, that arsenic and the children who frequent the Community Sailing Center “don’t make a good combination.”

On a recent tour of the site, Warner explained that its arsenic residue comes from a “giant” coal pile that covered that patch of ground from 1953, when the Moran Plant opened as the city’s electric power station, until 1986, when it was shut down. Grass now covers most of the irregularly shaped half-acre bordered by a mesh fence that has collapsed in a couple of places. Along one of its perimeters stands a cluster of sculpted granite slabs put in place in 1991 and now mostly splattered with spray-painted graffiti.

Coal remains visible in one section of the site, all of which is slated for redevelopment as part of the Moran Plant’s pending conversion into an ice-climbing facility, children’s museum, sailing center and restaurant. Mitigation hasn’t taken place yet because the ground will be disturbed by the redevelopment work, Warner says. The plan is to place a fabric barrier over the contaminated area and then cover it with a 6-inch layer of fresh soil.

Cleaning up the grounds of the Moran Plant will cost an estimated $150,000. That price includes remediation not only of the arsenic but of other toxins, such as benzopyrene, known to be deposited in the surrounding soil as a result of the coal-fired plant’s 33 years of operation.

The plant itself will also be detoxed prior to reconstruction at a separate projected cost of $218,000. The Burlington Electric Department “did a superb job,” Warner says, when it decommissioned the brooding brick hulk. But asbestos, lead paint and plenty of pigeon poop must still be removed. “Low levels” of carcinogenic PCBs will likely be found as well, Waite says. Testing for contaminants is ongoing, he notes, adding, “I don’t expect anything there to be a show-stopper.”