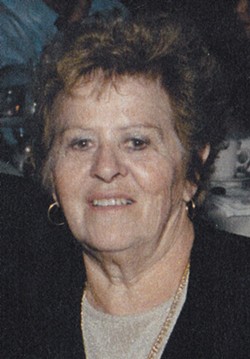 Arlene Cunningham, passed away on Monday, August 17th, 2015 surrounded by much love in her home. Arlene was born on July 11th, 1927 to the (late) George and Mabel (Beaudry) LaFlam in Charlotte, VT and spent 20 years enjoying life on the family farm with her 8 siblings.

On November 8th, 1947, she married Eldred Cunningham, Jr and had short lived careers at Pittsburg Paint and EB & AC Whiting before she began raising her family. Arlene spent 24 years as an incredible, hands on, stay at home Mom to her 7 children while she was also the bookkeeper for her husband’s companies. In 1971, Arlene embarked on a 25 year career with the VT Lung Association and retired from there at the young age of 69.

Arlene, became a young widow at the age of 53 and surrounded herself with her family and friends. We will forever cherish all the family gatherings at her home where she loved cooking, cribbage, card games and the many antics that came with being the Matriarch to a brood of 65+.

The family wishes to extend their deepest thanks to Reggie, Peggy and Debbie Benoit for their endless support and love and to Donna, Crissy Maille and the rest of the team at the VNA for their care and resourcefulness.

In lieu of flowers, donations can be made to the Alzheimer’s Association of Vermont, 300 Cornerstone Drive, Williston, VT 05495 or the VNA Hospice Program, 1110 Prim Road, Colchester, VT 05446.

Visitation will be Friday August 21 from 4:00PM to 8:00PM at LaVigne Funeral Home and Cremation Service, 132 Main St., Winooski, VT. A Mass of Christian Burial will be held Saturday August 22 at 11:00AM at St. Mark's Catholic Church 1251 North Ave, Burlington, VT. Condolences may be shared at www.lavignefuneralhome.com.