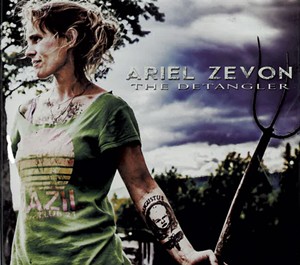 Ariel Zevon lives off the grid in Peacham with her sons and goats. Before discovering the freedom of rural Vermont 20 years ago as a student at Marlboro College, she grew up between Paris and Los Angeles, becoming self-reliant and inventive as the only child of a single mother. Now a single mother herself, she has built a sanctuary for her family in the woods with her own hands, an escape from the hypocrisy and destructive nature of modern culture. But she remains connected and dedicated to society through a variety of endeavors, from the now-closed LACE food co-op in Barre to the Brookview R&R in West Barnet — the latter a community center she runs with her mother, Crystal Zevon. And, on January 1, Ariel Zevon released a full-length debut album, her dispatch to the outside world.

The Detangler is an off-the-grid album in every sense. Zevon's writing is rebellious, honest and unhampered by fear of criticism. Those qualities are undoubtedly enhanced by the work of producer Kristina Stykos, yet another defiantly off-the-grid songwriter. Zevon recorded the album at Stykos' Pepperbox Studios, which is completely powered by solar and wind energy.

Zevon pulls from a diverse range of decidedly rock-and-roll influences, making it difficult to ignore her very famous last name. She is indeed the daughter of rock icon Warren Zevon. Once this connection is known, it is next to impossible to avoid comparison — even if it's unfair.

The most striking similarity is that father and daughter share a powerfully rebellious spirit and affinity for witty, articulate lyricism. Biting, feminist humor is present in Zevon's songwriting, coupled with instrumentation that has a bit of a '90s barefoot jam quality. The Detangler might convince you — if you aren't already there — that single moms are probably the only hope for the future.

"Cold Hearted Empath" sounds like Carole King if she had discovered the Riot Grrl movement; it's a super-catchy anthem. "Lonely Boat" enters '90s college-rock territory with a vocal delivery that teeters between spoken and sung. It's easy to picture rural liberal arts school students getting down to that track at SolarFest.

The title track has an unexpectedly cinematic quality that augments the grander themes present in Zevon's songwriting — this is perhaps a theatrical holdover from "Marshlands," the rock operetta she wrote with Montpelier's Duffy Gardner.

"Bitches Cry Too" is an excellent, humorous folk song about the liberation of bitchdom. It's a simple song with interesting instrumental details — such as the uncommon combination of trumpet and banjo, for example. Zevon keeps it just weird enough to be slightly challenging.

Zevon plays a release party for The Detangler on Saturday, January 27, at Sweet Melissa's in Montpelier. The Detangler is available at cdbaby.com.