Are Tiny Houses a Solution to Vermont's Housing Issues? 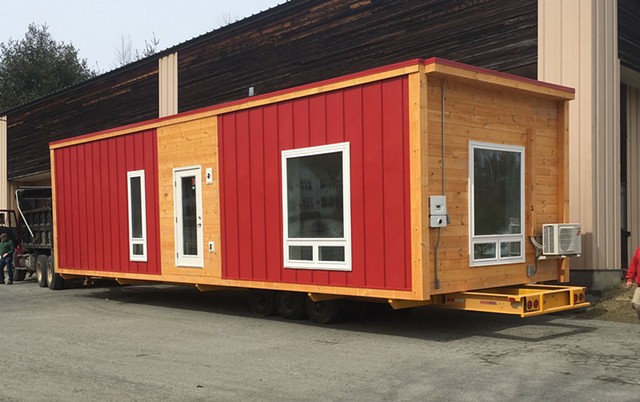 If you've been on Instagram in the past decade, you've probably seen a tiny house. These pocket-size abodes are cute, wholesome and minimalist — and can look like an easy remedy to our often overstuffed, overstimulated lives. And the social media hashtags, of course, abound: #tinyhouse, #tinyliving, #homeiswhereyouparkit, #houselessnothomeless.

October's Tiny House Fest Vermont in Waitsfield will offer opportunities to appreciate the simple aesthetics of a tiny house, converted camper van or some other alternative form of living. But its organizers are also focused on how tiny houses and their sometimes slightly larger brethren can be used to solve housing and social issues in Vermont.

It's generally agreed that a tiny house has fewer than 400 square feet. Beyond that, there's a lot of variety. Some tiny houses are on wheels, easily pulled behind a truck; others sit permanently on foundations. Some have full bathrooms and running water; others rely on composting toilets. They're often a place for architectural innovation, from miniature log-cabin-style houses to ultramodern designs that look like glamorous shipping containers.

But tiny houses can also provide safe, inexpensive housing to people who don't already have it. Cities across the country are already using tiny homes to address housing insecurity and homelessness. YES! magazine reported in 2018 that the city of Seattle owned nine tiny-house villages that served as emergency shelters. Volunteers were able to build these shelters for just $2,500 apiece. One such village, called Whittier Heights Village, featured 15 houses — each 100 square feet and painted in bright colors — and a common house that contained a kitchen, bathrooms and laundry facility.

A nonprofit called SquareOne Villages is doing the same thing in Eugene, Ore., where the Eugene Weekly reports that the median sale price for homes is about $300,000. In SquareOne's tiny-house villages, residents pay only $250 to $350 per month.

"People are in the process of learning whether it's an expression of a need or a fashion," said Tiny House Fest cofounder Lisa Kuneman. "In our experience, the need is pretty significant ... The housing situation is dire." 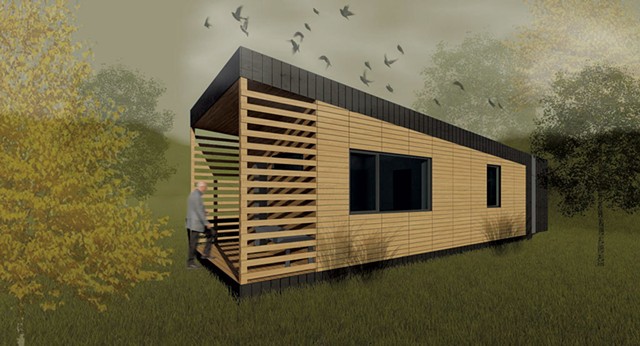 While Vermont doesn't have a full-fledged tiny-house village yet, professors and students at Norwich University are taking the initial steps toward a similar community as part of the university's Design Build Collaborative. Over the 2018 school year, led by associate professors Tolya Stonorov and Daniel Sagan, the collaborative built a 365-square-foot house called LIFT.

The outside is paneled in local hardwood, and the house offers a semiprivate porch with a roof, a remarkably spacious kitchen and living area, and even room for a washer and dryer. It meets high efficiency standards at almost every point. And, thanks to a partnership with Downstreet Housing & Community Development and Washington County Mental Health Services, the house will soon be located on a lot in Barre City. There it will serve a low-income tenant who's otherwise at risk of homelessness.

"We were working with them, looking at, specifically, 'How can this house address low-income needs, energy-efficiency needs, but also address the needs of people who have issues with mental health?'" Stonorov said. "That was a really rewarding and important thing to be involved with."

Stonorov and Sagan taught a preliminary seminar looking at homelessness and mental health issues before they even began designing the house. A nursing student in the class focused on details such as how to design lighting fixtures that would be calming for the future tenant.

"It was the first time we had a nursing student involved on the project," said Cara Armstrong, director of the Norwich University School of Architecture + Art. "We're starting to see it as having different, I would call them, 'circles of support.'"

The materials for the first LIFT house are worth about $34,000, and Armstrong estimates about 5,000 hours of work went into building it. Many local businesses donated materials and labor. Yet unknown are the costs of manufacturing the house in larger numbers.

The Design Build Collaborative will be building another house for Downstreet this coming school year for that same lot in Barre; the goal is to make LIFT 2.0 even more efficient and affordable. The collaborative will present at the Tiny House Fest in October.

Another Vermont company that will attend the fest is Vermod. Founded by Hartford developer Steve Davis in partnership with Efficiency Vermont's Zero Energy Modular program, the company aims to build small, resilient, energy-efficient homes that could serve as an alternative to mobile homes. The company is starting construction on its 100th home this month.

According to Vermod's home ownership adviser Ashley Andreas, Vermod has saved homeowners more than $1 million in utility costs to date — the homes are installed with solar panels, so residents incur no electricity or heating costs.

There's a key difference between a Vermod home and a mobile home. Mobile and manufactured homes are typically built to meet building codes set by the U.S. Department of Housing and Urban Development. But Vermod builds its houses to meet the more standard International Residential Code.

"That, to me, is the biggest piece in breaking down generational poverty in home ownership," said Andreas. "Manufactured mobile homes depreciate annually, kind of like a vehicle." But Vermod houses don't depreciate in the same way. They're stick-built, with a full wooden frame, instead of the steel frame that's traditional in manufactured homes.

"These are intended to be forever homes," Andreas said. The smallest version costs $122,000, but Andreas listed many resources available to low-income buyers, including loans from the U.S. Department of Agriculture and the Champlain Housing Trust, as well as incentives from Efficiency Vermont and the Vermont Low-Income Trust for Electricity.

Andreas said the company has a wide range of customers, but the largest number of their homes go to people downsizing or looking to replace a mobile home. As of October 2018, Vermod had built 86 homes. According to a company report, 71 percent of them went to mid- to low-income Vermonters; 58 percent went into a park, a co-op or a multifamily project.

These homes are not necessarily "tiny": Vermod houses range from 500 to 1,000 square feet. Vermod could be a great option for someone who's into the idea of a small home, Andreas said, but doesn't actually need to be able to haul it down the road.

Among the most significant barriers to the tiny-house movement are building codes and zoning laws: They're different in every municipality. Burlington-based tiny-house educator Ethan Waldman owns a tiny house, but he keeps it in Morrisville.

"Tiny houses are one solution that can work really well in the more residential neighborhoods that have backyards, or anywhere that has empty lots. They're easy to move, but they're still very nice, and nice to live in," Waldman said. "I kind of think that they make a lot of sense for Burlington." 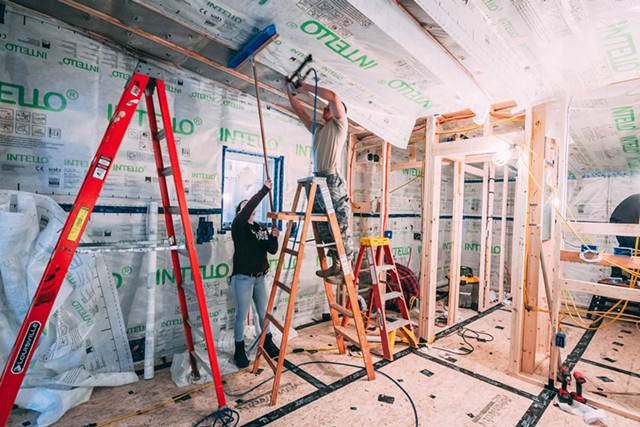 But gaining permission to live in a tiny house in Burlington can be tricky. According to David White, the city's director of planning, the challenge is partly due to codes and partly due to basic economics. A person could certainly buy a piece of land and build a tiny house on it — but they'd have to invest in connecting it to the city sewer system and building the required number of parking spaces. And with the high cost of land in the city, it would probably make more sense to build something larger, with a better resale value, White said.

"Is that small unit really economically viable on a lot that could either accommodate a larger building, or a larger building that has a couple of units in it?" he asked rhetorically. "Therein lies a challenge."

OK, so what about a whole village of tiny homes? Then you run into issues around how many units you're allowed to have on a standard residential lot. In low-density neighborhoods, that number is one.

"[A tiny-house village] might be possible, assuming that the lot is big enough to allow for you to have multiple dwellings on the lot," White said. But the minimum size for that lot would probably be about two acres — and who's out there with the cash to buy two undeveloped acres in Burlington?

"If the economics work, great," White continued. "But I can see the tiny house and the tiny-house village as being economically challenged."

A lot of tiny-house advocates point to the possibility that they could be used as accessory dwelling units, or ADUs, on properties that already have a home. Homeowners could rent out a chunk of their lawn to a tiny house and make some extra cash, and tiny homeowners could find prime real estate within the city.

But anytime a new ADU is added to a lot in the city, a conditional use permit is required — meaning going through the development review board and having a public hearing.

"That is really onerous," White said. An additional ADU also currently requires a new parking space on the lot. Many lots also have restrictions on how much of the lot can be covered by buildings or parking. And in Burlington, White said, many properties are already at or over that limit.

However, these issues and more were discussed at the second of two city housing summits in September. White said the city is considering proposals that would eliminate both the need for a conditional use permit and a new parking spot for new ADUs. He said Burlington could see potential policy changes presented as soon as October.

White pointed out that, in Burlington, developers could face many fewer barriers if, instead of building individual tiny houses, they built an apartment building with many tiny units. Which got this reporter thinking about her own shoebox studio apartment. Somehow, it has never seemed to have the same appeal as a tiny house — but maybe it's just time for a rebrand.

The original print version of this article was headlined "Dreaming Small | Are tiny houses a solution to Vermont's housing issues?"