Are the Rich Really Running From Vermont's 'Death Tax'? 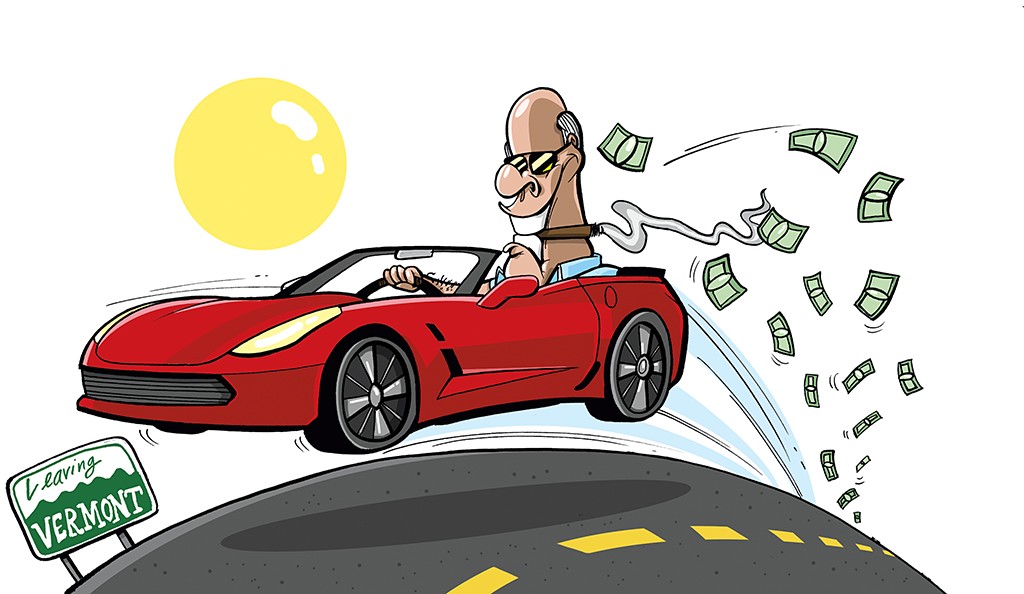 When rich Vermonters die, their kids aren't the only ones who get a windfall. The state is a beneficiary, too, taking a 16 percent cut of the value of estates over $2.75 million.

Vermont is one of just 12 states that still have an estate tax — or, as critics call it, a death tax. Most others ditched theirs after a 2001 federal tax overhaul.

Gov. Phil Scott thinks the tax chases wealthy families out of Vermont, ultimately starving the state of steadier revenue streams that would be collected before they die, such as income and sales taxes. So in his proposed budget, now being hotly debated by the legislature, he called for a big tax break for wealthy Vermont families in the hopes they'll keep their greenbacks in the Green Mountain State.

The plan has reignited a long-simmering policy debate over whether Vermont's tax burden is so high that it's driving people to states with lower taxes. Though there's no conclusive data to prove this theory, those who believe it have plenty of anecdotal evidence.

"The ones with all the money are checking out," said Pat Robins, cofounder of the SymQuest Group, a South Burlington technology services company he sold in 2015. "I know, because a lot of them are friends of mine."

It's one thing to ask the wealthy to pay taxes on their own income or properties, he said, but it's another to tax what they're trying to pass on to their children. Many can and do leave the state to protect those assets, he argued, depriving Vermont of the taxes and economic activity they would have otherwise generated.

Paul Cillo doesn't buy it. The executive director of the Public Assets Institute in Montpelier said he's heard this claim for years and has never seen any evidence to back it up.

"This convention about people leaving any state as a result of tax changes is nonsense," Cillo said. "It's basically an argument without substance."

People move for jobs, to be closer to family or for better weather, but not to flee higher taxes, he said. Studies done after states have imposed taxes on millionaires have debunked the claim, he said. One 2011 study by the nonprofit Center on Budget and Policy Priorities was titled "Tax Flight Is a Myth: Higher State Taxes Bring More Revenue, Not More Migration."

"What happens is, people pretty much stay put," Cillo said.

The number of people coming into the state mostly makes up for those who leave, he added, creating a population churn that is not only natural but healthy.

Tax Commissioner Kaj Samsom disagrees. The state should not be satisfied to simply replace departing residents with new ones, he said, calling it a recipe for stagnation.

"Clearly, for the Scott administration, success is not equilibrium," Samsom said.

The goal should be to increase the number of high-income residents by continuing to attract new ones and encouraging people to stay, he argued.

Vermont has a relatively progressive tax structure, meaning rates increase as people's incomes do. The problem, according to Samsom, is that the state has few wealthy people compared to others.

It ranks 41st in the nation by one key measure of wealth: the average income of the top 1 percent of taxpayers. Connecticut tops the charts at $3.2 million. Vermont is at $1 million, according to the nonpartisan Institute on Taxation and Economic Policy.

"A progressive tax structure doesn't do what you want it to do if the high income and high wealth is not there," Samsom said.

All told, the Department of Taxes estimates that the state would give up about $10 million per year in revenue if the proposal became law, a change that would be phased in over several years.

Financial professionals have been telling the state for years that its tax structure in general, and the estate tax in particular, contributes to driving well-off people elsewhere, Samsom said.

Rebecca Walsh, a financial planner with Pathway Financial Advisors in South Burlington, said there is broad consensus in her industry on this point.

"Every financial planner, attorney and accountant I've spoken to about this issue has handfuls of anecdotes of clients who decide to establish residency in another state while keeping a foot in Vermont, to reduce their income [tax] and estate tax liabilities," Walsh said.

People with multimillion-dollar estates usually own homes in other states, often in warmer climates, so shifting their residency is not difficult, Walsh said.

States such as Florida generally require legal residents to be physically present for six months plus a day, which is not that much longer than the de facto Vermont winter. And the cost of airfare twice a year, Walsh noted, is far from prohibitive for someone with a $10 million estate.

"That range of wealthy clients have a lot of flexibility on how to live their lives," she said.

According to Rick Kozlowski, a Burlington attorney who specializes in estate planning, the combination of state income and estate taxes pushes Vermonters to leave — or, in legal terms, change their domicile.

"It's the hit to their income combined with knowing that when they're gone, their kids will be writing out a big check to the State of Vermont," Kozlowski said. "It riles them as unfair. They're thinking, Why should I give 16 percent of what I've earned and saved over my life to the State of Vermont just for the privilege of being there?"

To reduce their exposure to the estate tax, many clients instead give money to their children while they are alive, Kozlowski said. As long as the parent lives for two years after making such a gift, it is not taxable, he added. So, a person who gives an adult child $1 million can avoid paying $160,000 in estate taxes after death.

The administration faces several challenges in making its case to reform the estate tax.

One is a data problem. No information clearly shows how many people leave the state due to the tax. Samsom's department knows how many Vermonters change their tax domicile, but it doesn't know why.

The department recently tried to analyze the exodus. It examined tax data from 2017, looking at returns from nonresidents who used to file taxes as Vermonters but still have to make disclosures based on Vermont income. Someone who now lives in Florida for more than six months of the year, for example, might still have a rental property in Vermont on which they have to pay state income tax, Samsom explained.

The analysis found that 422 nonresidents who were over 60 years old and made more than $200,000 per year filed returns with the state. Of those, 200 had moved from Vermont to states without an income or estate tax. The top two destinations were Florida (136) and New Hampshire (45).

This suggests to Samsom that while climate is certainly a motivator for people to move elsewhere, tax benefits are also clearly part of the equation.

Cillo said that such analysis fails to consider that a similar number of people in that income range likely moved into the state. In 2016, 420 such people moved out and 401 moved in, he said, citing Internal Revenue Service data.

Samsom countered that a closer look at the data shows there are fewer high-income residents coming into the state than leaving, and those that are replacing them are earning an average of $50,000 a year less.

He also noted that it wouldn't take that many more people staying in the state to recoup from other sources the drop in estate tax revenue. A typical resident earning more than $300,000 per year generates about $40,000 in a suite of other taxes, the department estimated.

People don't change their retirement plans on a dime. But if over the next 15 years just 17 more retirees per year decide to keep their tax home in Vermont than would have otherwise, the state could recoup the $10 million annually. The more high-income residents who stay, the faster the state would not only recoup the lost revenue but exceed it.

Rep. Janet Ancel (D-Calais) isn't convinced that lowering the tax would really change the retirement patterns of the wealthy.

"I don't think the data proves or really even demonstrates that," said Ancel, the chair of the tax-writing House Ways and Means Committee. "There are a lot of reasons people move."

But she does think the estate tax contributes to the impression of the state as high-tax, and there might be fairer, broader ways to make up similar revenue. That's why her committee recently supported raising the exemption, but only to $5 million, instead of the governor's proposed $5.75 million. To compensate, the committee proposed raising $5 million by expanding the capital gains tax, which targets the sale of land and businesses.

The full House approved the change as part of a tax bill that now heads to the Senate.

There are signs that it may be in for a cool reception.

Sen. Chris Pearson (P/D-Chittenden) said he was "astounded" when Gov. Scott proposed in his budget address to reduce the tax burden on wealthy families.

"That is a segment of the population that I'm not fretting about," said Pearson, who sits on the Senate Finance Committee. He said he was surprised to see the House "essentially advance the governor's proposal" and said he'll need some serious convincing to support it.

"To me, the onus is on folks to really clearly and unequivocally prove that we have a drain of wealthy families in Vermont," Pearson said. "I just don't see it."