Are Chittenden County Recyclables Getting Recycled? 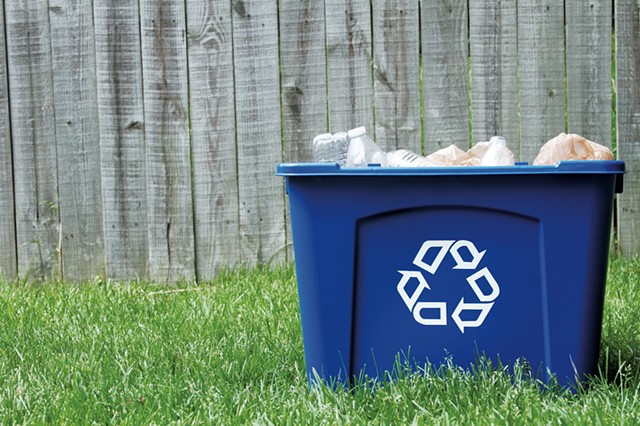 Remember when it seemed that recycling could save the world — when our plastic bottles were whisked away along with our guilt about the state of the planet? Our waste isn't really waste, we might have thought. It's amorphous material that can be transformed into new products again and again. All we have to do is put it in the bin.

Well, it's 2019, and recent reports by the United Nations Intergovernmental Panel on Climate Change indicate that we have about 10 years to avoid catastrophic impacts on the Earth, and that doing so will require unprecedented policy changes. In that context, recycling feels more like a drop in an ocean-size bucket.

It doesn't help that recent news reports about recycling in the U.S. have been scary, too. In March, the New York Times reported that some cities have started limiting the number of materials they accept — and some, such as Deltona, Fla., have stopped curbside service altogether. In January, the Philadelphia Inquirer reported that at least half of the city's recycling was actually being incinerated. And the largest recycling chain in California, rePlanet, which operated 284 recycling centers across the state, shut down this month. The company cited low prices on aluminum and plastic, declining state support, and rising operating costs, according to the Sacramento Bee.

These reports came in the wake of China's 2018 decision to place new restrictions on the recyclables it will accept, all but cutting off the flow of those materials to the country. In the past, up to 40 percent of American recyclables had been shipped to China, according to the Guardian.

As the recyclables market became oversaturated, prices sank, and U.S. cities scrambled to find new buyers. Americans were faced with the terrifying realization that recycled materials don't take care of themselves. Nothing is recyclable unless someone wants to buy it.

So what about Chittenden County? What's happening to our bottles, cans and cardboard after they leave our hands?

Seven Days reported on the new Chinese restrictions in May 2018, when the Chittenden Solid Waste District raised tipping fees — the charge for haulers who bring recycling to its Materials Recovery Facility — from $21 to $25 per ton to help address its revenue gap. CSWD is the governmental organization that oversees waste management for Burlington and 17 other communities.

Currently, the tipping fee is $65 per ton, according to CSWD general manager Sarah Reeves. Haulers have typically passed some of those costs on to consumers through increased pickup fees.

In the 2018 interview, Reeves worried that the market for recycled paper could dry up. "What is the price point going to have to be where it's just cheaper for the customer who buys our product to move it to a landfill in West Virginia or Ohio?" she said.

In a recent interview with Reeves and CSWD director of outreach and communications Michelle Morris, Reeves said that her comments had been based upon similar fears voiced by others in the industry but that those concerns haven't become a reality.

"We're very confident that the material that goes through our facility is getting recycled," she said. Once a product is sold to a buyer, "it's in their best interest to then further sell that product" to someone who will make it into a new product.

To be clear, just because there's a way to recycle a material doesn't mean that CSWD is making any profit from the transaction. In fact, the district still pays for someone to take away both paper and glass. Paper was the only CSWD material affected by the new Chinese policy. The issue, Reeves said, is that the U.S. doesn't currently have enough mills to process the recycled paper. However, six new mills will be coming online in the Northeast in the next two years.

The Materials Recovery Facility is owned by CSWD but operated by Casella Waste Systems, a waste-management company founded in Rutland that now operates throughout the Northeast. There are a few big advantages to this arrangement, Reeves said. Casella negotiates with buyers for the recyclables and establishes contracts. It can also combine CSWD materials with those from other facilities, selling in larger quantities to buyers who might otherwise not be interested.

"We don't produce enough on our own, here, to send something out as they will [when loads are] combined," Reeves said. "So that's the power of being with a larger company."

Recycling has many other associated costs, according to Reeves. In Vermont, transportation is a particular challenge. With no ports and no major rail system, everything is hauled away on trucks. CSWD glass is crushed and taken to a quarry in Colchester, for example, where it's mixed with other materials and used in engineering projects such as road building.

In response to market changes, CSWD is considering updating its facility, which was built in 1993 and still operates as it did then. Sorting Chittenden County's recyclables is labor intensive. Other districts around the country have automated the process so that workers can focus on quality control. At CSWD, recyclables are handled more than once.

"Our people that work there do an amazing job," Reeves said, but to fully sort everything, "they have to do it twice."

Second, clean your recyclables well — the cleaner they are, the more they're worth. Anything with stuck-on food goes in the trash. And pay close attention to what's actually recyclable, especially when it comes to different types of plastic. Just because you think it should be recyclable doesn't mean it is. Wish-cycling, as Morris and Reeves called it, helps no one.

Third, if you're not sure whether a product is recyclable, or whether it's clean enough, "When in doubt, throw it out," Reeves said. It's better to create one more piece of trash in the landfill than to potentially contaminate a whole load of recycled materials.

Still unsure about that empty container? The CSWD website has a search tool on how to dispose of many different items, and it operates a Waste Reduction Hotline.

Will recycling ever completely pay for itself? Reeves can't say. Back in 2013, when demand for recycled materials was much higher, CSWD actually paid haulers $2.50 per ton rather than charge a tipping fee. Reeves isn't sure markets will ever return to what they were before China's policy changes, but she and Morris are hopeful for the future of the industry.

The original print version of this article was headlined "Are Chittenden County Recyclables Getting Recycled?"