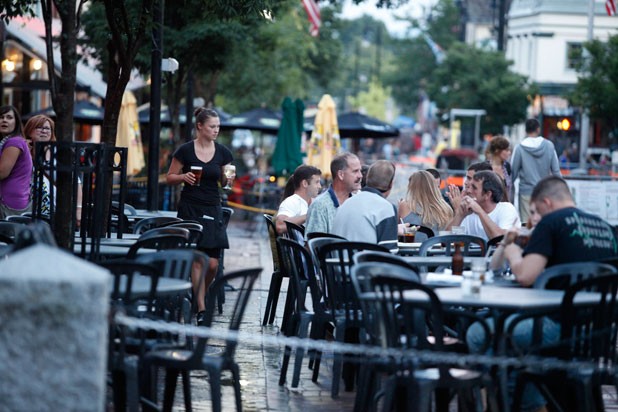 Burlington has been rolling out the red carpet this summer for its French Canadian visitors. From the “Bienvenue Québecois” stickers in storefront windows to a French-speaking greeter stationed on Church Street, the Queen City has gone to great lengths in recent years to demonstrate that the Québecois — and their tourist dollars — are welcome.

But at some local restaurants, the hospitality appears to be wearing thin. At least two eateries admit they allow servers to add an automatic gratuity on the bills of diners who appear to be Québecois. Why? Because Canadians are presumed to be bad tippers. A few local servers even have a nickname for the surcharge: They call it the “Queeb tax.”

Steve Hulsey and Anne-Marie Humbert noticed the strange charge after a July meal at Splash at the Boathouse. Though the couple resides in Williston, Humbert is originally from France. On this occasion, her French-speaking nephew was visiting, so they all spoke French at dinner.

When the bill arrived for the party of three, Humbert’s recalls that her first thought was: “Well, that’s steep.” On closer examination, she realized it included an 18 percent tip.

Hulsey summoned the waitress, who explained that she’d heard the family speaking French, and that the restaurant has “kind of a policy” to include the gratuity for parties that appear to be from Québec or Europe.

After Hulsey explained they lived in Williston, the waitress removed the extra gratuity. She got a 15 percent tip.

Humbert complains of similar treatment at Asiana Noodle Shop. After dining with French-speaking friends at the Church Street restaurant, she has twice received bills with a gratuity included. The first time she paid her bill without comment. On the second occasion, after asking about the bill, Humbert says the server told her the added gratuity was a mistake and then corrected the check.

It wasn’t a mistake, per se. Owner Sandy Kong says that while the restaurant doesn’t have an official policy, she lets servers decide whether to add a gratuity.

“If the Canadian customers were tipping at 15 percent, I wouldn’t let them do this,” Kong says of her waitstaff. But the Canadians are not, she alleges. On a single day last week, Kong says, one party left a $3 tip on an $80 bill; another left nothing for the server on a $90 tab.

Splash takes a similar approach. Owner Barb Bardin is emphatic that there’s no “policy” about the mandatory gratuities, but adds that her young waitstaff works too hard to get stiffed on tips. Like Kong, Bardin says she’s baffled about how best to go about “educating” foreign customers about tipping practices in the United States, and she views attaching the gratuity automatically as “a helpful guide.”

“Because the servers really have such a hard time with it, I just leave it up to them,” says Bardin, who tells her waitstaff, “You do what you feel is appropriate for you.”

Similar scenarios in other states have led to lawsuits. In 1999, a diner named Charles Thompson called 911 after a 15 percent tip was tacked onto his bill at a Thai restaurant in Miami Beach, Fla. Thompson, who is African American, told police that when he asked about the automatic gratuity, the restaurant owner explained it by saying, “Black people don’t tip well.” Thompson’s complaint prompted the Florida attorney general to file a lawsuit against the restaurant owner, and in 2009 the owner settled the charges by paying $15,000 and instituting a uniform tipping policy.

The Vermont Human Rights Commission hasn’t received any complaints about mandatory tips, according to executive director Robert Appel. But even an anecdotal report raises multiple red flags. National origin is one of several protected classes under Vermont’s “public accommodation” statutes, which ensures that the owners of restaurants can’t refuse service to anyone based on their country of origin, race, sexual orientation or disability.

“It would seem contrary to the intent of the law to single out a subset of customers based on one of these protected categories and subject them to differential treatment,” Appel reasons. “What do you do with cheap natives? What happens if you get stiffed as a waiter? I don’t think failing to tip or miserly tip service is restricted to any one [group of people].”

Several Burlington-area servers, most of whom spoke only on condition of anonymity, admitted they are often less than thrilled to find Québecois customers seated in their sections — not just because of the tipping issue but because of a perception that French Canadian customers are more demanding. But most don’t have, or won’t admit to, any auto-tipping policy aimed at French Canadians. In fact, some restaurants specifically forbid servers from adding an automatic gratuity.

That’s the case at Three Tomatoes Trattoria on Church Street. Server Jen Brandt, who waits tables outdoors, would like to see the restaurant print out suggested tip amounts on the receipt that comes with the bill they present to customers.

But that hasn’t solved the problem at Asiana Noodle Shop, where every receipt includes a note suggesting an 18 to 20 percent tip. Despite this, server Diem Huynh says she’s seen some Canadian customers ask diners at nearby tables about the local tipping customs.

Bardin says the manager at Splash balked at putting a note on receipts or menus because she thought it would be tacky. “You’re damned no matter what you do,” Bardin says.

Humbert is personally sympathetic to servers who fear their customers will skip the tip. But she says requiring foreigners to pay extra is “discriminating.” It also appears to be illegal. Her solution? She says Burlington restaurants should get on “the same page” about how to handle the tipping conundrum.

The Lake Champlain Regional Chamber of Commerce has encouraged restaurants to translate menus into French, and recommends adding a polite, diplomatic note on French-language menus explaining the local customs. Chamber director of communications Gen Burnell hadn’t heard about the practice of mandatory tipping, but says that Burlington businesses have a responsibility both to welcome and educate Canadian visitors.

Are customs to the north really that different? Québecois waitstaff earn a minimum $8.55 an hour, plus any tips they make. Vermont restaurants pay servers as little as $4.10 an hour, but if hosts, waiters, waitresses and bartenders don’t make enough in tips over the course of a week to bring the wage up to the state’s minimum — $8.46 an hour — the employer makes up the difference.

Officially, voluntary tipping is customary on both sides of the border. According to Tourisme Québec, tipping is de rigueur in restaurants, bars, taxis and hair salons. Customers are expected to tack on 10 to 15 percent of the pre-tax bill.

But Alex Hudson, a Montréal native who is a server and hostess at American Flatbread in Burlington, says many restaurants in her home city add an automatic gratuity. She recommends checking the menu — and the bill — or asking about the restaurant’s policy.

“It’s just the way it works there,” says Hudson. “That’s why I think, for the most part, they may not tip as much.”

This summer, anyway, more French Canadians are coming. The chamber’s Burnell says local hotels and bed and breakfasts are reporting more visitors than in 2011. The chamber’s website uses a Google plug-in to translate the site into French, and the number of visitors using the translation service is up 20 percent over last summer. Burnell says the actual economic impact of French Canadian tourism is hard to estimate, but insists it extends beyond just a “goodwill” relationship.

“I think it’s absolutely essential to the health and vibrancy of [Vermont] tourism,” she says.

Hudson agrees. “I say, bring it on. We’re neighbors.” While she sympathizes with all those disgruntled servers, Hudson says she’s reluctant to place the blame on foreign tourists — many of whom, including those from Canada, speak English.

“Any server who is not appropriately tipped for the service they provide, regardless of where the customer is from, is frustrated,” she says.

But, as the French say, C’est la vie.