Archivist Kevin Shapiro Talks About 'Phish in the North Country' 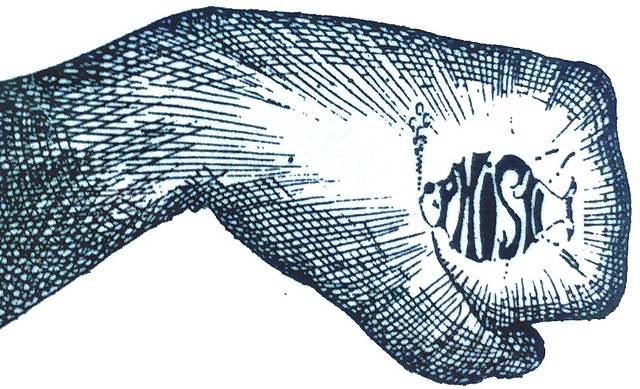 Phishheads, rejoice: A new opportunity has emerged for celebrating the roots of Vermont's grassroots musical phenomenon. "Phish in the North Country" is currently on view at the Flynn Center for the Performing Arts' Amy E. Tarrant Gallery in Burlington. The exhibition mines the jam band's archives to present a chronological survey of poster art and ephemera spanning three decades.

The impetus for the show is the 20th anniversary of the founding of Phish's charitable WaterWheel Foundation. And that occasion has strong ties to the Flynn, Phish archivist Kevin Shapiro explained during a recent gallery walk-through.

"We're at the epicenter right here," he said. In 1997, Phish teamed up with Ben & Jerry's to launch Phish Food — the now-best-selling ice cream flavor — and performed a sold-out concert at the Flynn. In exchange for selling the license to their brand, the band members decided to direct their portion of royalties from Phish Food sales toward Lake Champlain cleanup, and WaterWheel was born. Display cases at the back of the gallery show the evolution of the Phish Food pint design, among other ephemera.

What began as a local charity has since grown into a movement — and sales of original, limited-edition WaterWheel prints are a major factor in fundraising. As the band's website explains: "In essence, WaterWheel is the Phish community coming together to share in positive ways with the local communities we all visit on tour stops." WaterWheel's Touring Division has contributed more than a million dollars to roughly 425 organizations.

The band's devoted fan base mushroomed with the help of a flourishing trade in unauthorized concert cassettes. Shapiro, who attended his first Phish concert in September 1991, was among those who recorded early shows. By spring 1992, he said, "[The band] started to recognize that I was out there taping a lot." In 1996, Shapiro finished law school and moved from his home state of Michigan to Vermont to accept the formal position of archivist.

As archivist, Shapiro organizes and manages the band's collections, including audio, video and photo assets, as well as other memorabilia. "The role includes making materials accessible to the band and [WaterWheel] organization, and sometimes the public," Shapiro explained.

As the exhibit's title suggests, Shapiro narrowed its scope to the North Country, a region he defined as "in striking distance of Burlington." In other words, someplace you can get home from, after a concert, by morning. "This is barely home before daylight," Shapiro said, pointing to a Scott Campbell poster from a 2010 show at Maine's Augusta Civic Center. 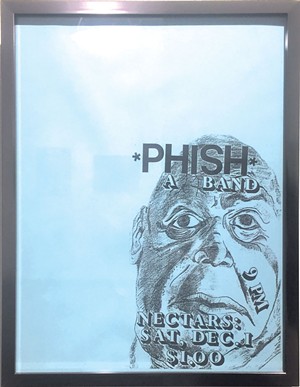 In a back corner of the Tarrant is a blue photocopied flier featuring an 8.5-by-11-inch amateur portrait of a guy resembling a chubby Pablo Picasso. The text announcing the December 1, 1984, show at Nectar's bills Phish simply as "a band." Admission was a dollar.

Sharing the wall are 15 more handmade fliers, which indicate the band's progression from playing small local venues such as Doolin's (now RJ's), Hunt's (now the Vermont Comedy Club) and the Front (now Skirack) in the mid-'80s to slightly bigger ones — Burlington's Battery Park band shell and the Colonial Theatre in Keene, N.H., in the early '90s.

According to Shapiro, some of the creators of the early fliers are unknown. But he's hopeful that may change. "I believe [that] during the course of this exhibit, we may identify some of these [unnamed] artists," he said.

Many of the early and hastily made promo fliers, however, contain drawings by an artist who would come into his own renown alongside Phish guitarist Trey Anastasio, drummer Jon Fishman, bassist Mike Gordon and keyboardist Page McConnell: Jim Pollock. Now based in Chicago, Pollock met McConnell while both were students at Goddard College. Pollock provided sundry pen-and-ink cartoons and illustrations for the band's leaflets, from a crosshatched, beer-bellied loafer to fierce piranhas baring gnarly teeth. Pollock also provided artwork for the band's first album, Junta, which was released on cassette. 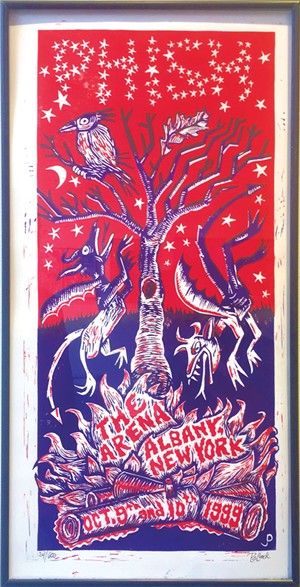 The selection of annual WaterWheel prints on view in the gallery is almost entirely by Pollock. Charming, fantastical and often cartoonish, each edition of the handmade linoleum-block prints features two signature elements: a fish and a waterwheel.

But other artists are represented, as well. A colorful, Japanese-inspired design from 2004 by Jeff Wood riffs on tripped-out '60s festival posters. So do a couple of mandala-inspired works by artist Nate Duval, who has created multiple Phish posters. Duval has also created designs for Andrew Bird, Dave Matthews Band, OAR, Wilco and many other bands.

Other pieces on view at the Tarrant were created by James R. Eads, Justin Helton of Status Serigraph and Julia Rothman. Most are colorful and playful with strong graphic elements; all were intended to be collectible works of art.

"Sustained prolific creativity is a hallmark of the group," Shapiro said of the band. So it makes sense that this ethos would extend to the visual. "It's a wide variety of interesting and talented people who've come to care about Phish," he added.

For anyone familiar with Phish — or just for longtime Burlington residents — this exhibition will surely trigger reminiscences of bars, scenes and concerts past. For everyone else, it offers a glimpse into a distinct subculture born in Vermont and tied to the state for eternity.

Shapiro will give gallery talks on Saturday, November 4. Accompanying him: a limited-edition WaterWheel poster by Jim Pollock for sale, and free Phish Food.