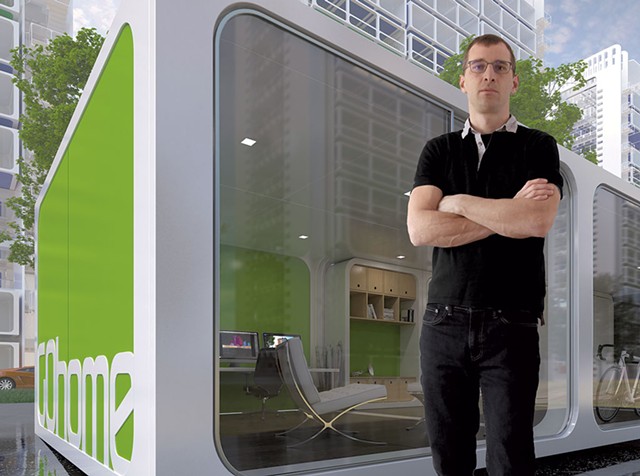 At his small home office in Westford, architectural illustrator Lincoln Brown folds his six-foot frame into a rolling desk chair in front of five computer monitors. The 42-year-old former Category One competitive road cyclist is also a serious DIYer. He has made nearly everything in sight: the corner-wrap desk, the computers (though not the monitors), the bunk beds where his niece and nephew sleep when they visit, and even the house itself. Brown trained as an architect, and he has that profession's drive to design environments down to the last detail.

That impulse informs his day job, too — which is creating photorealistic renderings of buildings and interiors yet to be built. At two monitors, Brown calls up illustrations of a proposed new storefront interior for Ceres Natural Remedies, which sells cannabis-derived products in Burlington and Brattleboro. He clicks through a half dozen different combinations he has made of display-counter surfaces, lighted niches, floors and window frames. Every version appears real.

Then there's the curved brick wall behind the display counter. There is no telling that wall from a photograph of a real one — but it's faux. Brown, who can access folders containing nearly endless brick types, uses composite images to create the bricks' shadows. With a grayscale layer, he can define how far the bricks extrude from the wall. He can even control the degree and direction of reflecting light.

Eric Farrell, a local developer, has hired Brown to illustrate nearly all of his projects in the last decade, from Bacon Street Lofts in South Burlington to the planned Cambrian Rise in Burlington. Farrell uses the visuals to facilitate approval by investors, municipal boards and Act 250 reviewers, as well as permitting by design-review boards. Of Brown's illustrations, Farrell says, "You've got to look close at them to see: Is this a proposal, or does this building already exist? They're that good."

Brown not only excels at what he does; he's the only independent architectural illustrator in Vermont. Clients of Lincoln Brown Illustration are mostly developers, both local and national, as well as some architectural firms. They find him solely by word of mouth, he says.

Brown has made renderings of, to cite only a few examples, Smith Buckley Architects' Hotel Vermont and the Burlington International Airport Skinny Pancake restaurants; Christine Burdick Design's interiors at Dealer.com and the Essex Resort & Spa; and the Winooski and South Burlington downtown redevelopment plans by TruexCullins, where he worked as an architect-in-training from 1999 to 2002.

Brown has illustrated dozens of FedEx ground distribution centers for Scannell Properties in Indiana, which were subsequently built all around the U.S. He has rendered housing and hotels for Prime Companies in New York, and he's created a construction animation video of a historic football stadium addition for BL Harbert International in Alabama.

Says Rolf Kielman, principal at TruexCullins, "Around here, when we see a rendering in the papers, we usually say, 'Oh, that's probably Linc.' He's the king of the hill, so to speak."

Brown shares his rural home with his wife, metal artist Becky Macomber, two cats and a dog. He designed the house, which overlooks the Browns River valley, to be nearly net-zero. Brown also made the eight server computers stored in a downstairs closet. And he made the closet. In fact, he can conceive and build virtually anything — in his minimal-modern aesthetic — that customers might want through Modern Vermont, his custom design company.

Despite his skills, Brown has never been one to make much noise about himself. While earning bachelor's degrees in architecture and building science at Rensselaer Polytechnic Institute, his presentations impressed professors less for his spoken commentary than for his visuals, laboriously made on a Pentium 486. "I'm not good at verbalizing," he claimed. He was even skeptical about being the subject of an article, suggesting that, since a picture is "worth a thousand words," he could just send an architectural illustration instead.

After graduating from college, Brown, who had been bike racing since age 16, attempted to become a pro cyclist. Illustration was a means of supporting himself while training in New Jersey, Arizona and, since 1999, Vermont. At TruexCullins, he became "the go-to person for renderings," as Kielman put it.

Brown left the firm to start his own, Lincoln Brown Illustration, so that he could pursue biking for another two years — his last attempt. He was still doing so much work for Truex, however, that the firm sent him off with licensed software that would otherwise have cost him "eight grand," he said.

The illustrator makes visualizing easy with a library of 654 tree models, thousands of models of furniture and many ways of pictorializing people. "You have to buy each one," he said; the image of a Barcelona chair by Mies van der Rohe, for example, costs $50. (A photo of the architect hangs above Brown's desk, near a painting of a bike racer by Essex-based artist Stefan Bumbeck.)

Brown prefers to use ghostlike silhouettes of people, such as the skateboarders he put in the foreground of his renderings of a revived Moran Plant for the now-defunct New Moran development team. Clients, however, generally want realistic people, so he sticks to fleece-wearing Vermont types for local jobs. Once, the University of Vermont asked Brown to replace his mostly white passersby with a multiracial mix in a rendering of the George D. Aiken Center renovation, though he had spent hours on-site photographing the Caucasian flow.

Brown's rates start at $1,600 for a typical illustration of a building exterior — his most common product — and $10,000 for a package of exterior and interior illustrations and animations of larger projects.

Architect Jesse Beck, president at Freeman French Freeman in Burlington, hasn't yet hired Brown. He said it's "cheaper and quicker" to do basic renderings in-house. When highly polished renderings of the kind Brown produces are needed for sales brochures or fundraising, the firm has tapped an architectural illustrator in upstate New York.

Larger firms with which Freeman works either use their own in-house illustrators — PKSB Architects in New York produced the renderings of the Burlington Town Center redevelopment, for example — or "go straight to China" for their illustrations, said Beck. "When we get them from China, we've got to change the trees. The vegetation and mountain shapes aren't too New England."

At Truex, Kielman gets email offers daily from illustration mills in India and Bangladesh. But he believes that Brown is unlikely to be put out of business. "He's always slightly ahead of the curve," Kielman said. "Plus, his architectural training gives him a real head up, so he understands very quickly what you might be talking about."

Kielman recently hired Brown to do nighttime and daytime renderings of a reimagined UVM Fleming Museum of Art, with an entrance on Colchester Avenue, to interest prospective donors. He sent a few of the images to Nest by email, writing, "These renderings are so real that I would think the reaction by most viewers would be, 'Wow. The project looks done already.'"

Correction, Monday, December 11, 2017: An earlier version of this story misstated the cost of Brown's architectural software.

The original print version of this article was headlined "Visual Aide"