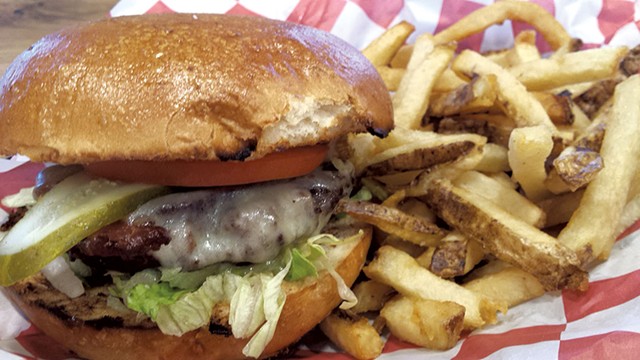 Shelburne-area residents can rejoice: Now under new ownership, Archie's Grill has opened its doors and is serving up burgers once again. Unless you're in the mood for a doughnut appetizer at the Dunkin' Donuts that now occupies its old spot, though, you'll want to hop across the street to 4066 Shelburne Road.

Patrons can find a familiar menu at Archie's — burgers, shakes, hot dogs, fries, salads — with a few additions: another vegetarian burger, a few more salads, sweet-potato fries. The grill currently has five local beers and one cider on tap.

Former owner Dick Hess will stick around for the first few months of operations to help new owners Tim Williams and Doug Nedde. While this is Williams' first foray into food, he's owned several previous businesses and describes himself as a longtime Archie's eater.

"This place was a local institution," says Williams. "It was just too good of a thing to let die." The grill's former space had already been sold when Williams took over, so when one across the street opened up, he took it. "It's a great space, and parking is better," he says.

On Tuesday, January 12, the soft opening was over, and locals seemed ready to welcome Archie's back. "This is what you've all been waiting for!" the restaurant's Facebook page announced on Monday. One excited patron had a succinct response: "YeaaaaaaaaaaaaAAAAA- AAAAAAAAAAAAAAAAA- AAWWWWW WWWW!!!"

The original print version of this article was headlined "Entrées"