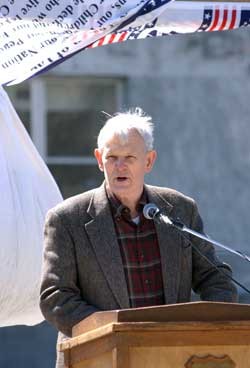 John McClaughry had been a state senator and a Harvard fellow, run for governor and worked as a senior policy analyst for President Reagan before he founded the state’s sole, free-market think tank 16 years ago.

Since then, his name has become synonymous with the Ethan Allen Institute. In fact, most people assume it’s a one-man operation, rather than an active organization with hundreds of members, a board of directors and outside advisors.

They’re about to learn otherwise. Next month, McClaughry will hand over the reins to a successor who will be charged with expanding the institute’s membership and offerings. EAI currently publishes reports, a monthly newsletter, and hosts dinners and conferences throughout the year.

“It’s time for the institute to run without me at the helm,” says McClaughry, 71. “Otherwise, it just looks like a personal hobby.”

It’s hard to picture McClaughry, a WDEV regular who pens weekly op-eds that appear in newspapers throughout Vermont, slipping quietly into a beach chair on the coast of Florida.

So don’t. Unlike his conservative brethren who are leaving Vermont for less taxing climes, McClaughry is staying put in the Kirby cabin he built with his own two hands.

“I’ve put too much time and energy into carving out this homestead to give it up just yet,” he says. He also plans to hang around the office through the end of 2010, working on policy projects and research, while the newcomer settles in.

Why “retire” now? McClaughry says the plan has been in the works for some time. In fact, he first approached the institute’s board with the idea three years ago. He hoped to make an announcement by the end of 2007.

“We interviewed six or seven candidates, and there was one everyone agreed on, but the problem was, he was too much like me,” said McClaughry. He urged the board to find someone who would be able to build coalitions with other organizations and help grow the institute’s membership beyond its current level of 600.

So, the board waited and this year launched a national search. It whittled the applicant pool down to four finalists — three from out of state and one from in state. In May, the board chose one of the out-of-state candidates. No biggie, as McClaughry points out. He grew up in Illinois and the institute’s namesake was originally from Connecticut.

“We have recruited a fine new president who has strong relationships outside of Vermont as well as an attachment to New England,” says Jack McMullen, one of EAI’s board members and a two-time Republican challenger to Sen. Patrick Leahy.

Neither McMullen nor McClaughry would identify the new prez until the official announcement in August.

McClaughry says his successor has crucial skills that he lacks, including facility with schmoozing, business development and coalition building. McClaughry describes himself as an intellectual introvert.

“I’m a great resource for him in terms of Vermont politics and history,” says McClaughry. “But I’m not good at the kind of outreach that is needed.”

EAI’s development plans come at a time when the conservative-leaning blog Vermont Tiger is looking to raise an estimated $300,000 to become a full-fledged media entity.

Maybe a conservative renaissance is in the offing for Vermont?

If so, the resurgence has McClaughry to thank for his guidance at the helm of EAI. He’s published reports on everything from psychiatric care to tax policy. His scholarship has ensured that free-market solutions continue to be part of the public policy debate in Vermont, even as the state has tilted to the left.

“In my opinion, John has had significant influence on the policy debate in Vermont — starting out 16 years ago as a lone voice in the wilderness, but over time becoming a respected op-ed commentator,” says McMullen.

Whenever McClaughry has aired his views on Vermont Public Radio, “we got comments,” says Communications Producer Michelle Jeffery, describing McClaughry as “a provocative commentator … who doesn’t mince words.” But he’s no longer a regular on the station. “He got too busy,” Jeffery says. The last piece he did for VPR — that she could find on the website — aired in October 2008.

Regardless of whether you agree with McClaughry, his affable demeanor and tireless efforts have earned respect from folks with whom he might disagree intellectually. He always ended each VPR commentary with a gracious, “Thanks for listening.”

“I have to give John credit, because whether the climate is favorable to receive his message or not, he’s been really undaunted in delivering it. That takes a lot of stamina,” notes Paul Cillo, founder of the Public Assets Institute, the liberal counterpart to EAI.

Cillo served in the Vermont House when McClaughry was in the Senate, but the pair never worked together. That is, until this past year, when their respective, polar-opposite institutes collaborated on an impressive website called “Vermont Transparency,” which compiles data on how the Vermont government collects and spends money. It’s the first endeavor of its kind.

“There are only a few things — well, two things — I can think of that we agree on,” said Cillo. “Transparency is one of them.”

The other? Both men hate the idea of extending tax credits to businesses.

The website isn’t McClaughry’s first project with Vermont lefties. In the late 1970s, he was part of the Decentralist League of Vermont, which attempted to bring together factions of the left and right that were opposed to the centralization and bureaucratization of government services.

As their manifesto exclaimed: “Decentralists share with ‘conservatives’ repugnance for unwarranted governmental interference in private life and community affairs. We share with ‘liberals’ an aversion to the exploitation of human beings. We deplore, however, conventional ‘liberal’ and ‘conservative’ policies which have concentrated power, ignored the importance of the human scale, and removed decision making from those most directly affected.”

This decentralist theme is also evident in the 1991 book McClaughry coauthored with University of Vermont prof Frank Bryan. In The Vermont Papers: Recreating Democracy on a Human Scale, the pair argued for the creation of 40 self-governing “shires” in Vermont rather than one centralized entity. About 75 percent of key state services would be handed over to these shires.

McClaughry also has been a supporter of Burlington Bread and other alternative methods of commercial exchange, including barter. He was talking up local economies long before “localvore” and “sustainability” became the buzzwords they are today. He helped found and still serves on the board of the Schumacher Society. That Massachusetts-based group is dedicated to the memory of E.F. Schumacher, who wrote the seminal book Small Is Beautiful: Economics as if People Mattered.

As he devotes more time to writing — and less to mailing lists and bank deposits — McClaughry is likely to find and wax about those libertarian sweet spots, where Right meets Left.

Paraphrasing Col. Ethan Allen, McClaughry defines his retirement strategy this way: “I plan to continue to be a pest and a scourge to arbitrary power.”