Warren Spinner has more than 12,000 trees in his database, and it's safe to say he's familiar with every single one of them. Over 35 years as Burlington's arborist, he has personally planned, planted and pruned much of the city's urban forest — that is, the trees in Burlington's parks, greenbelts and other public places.

At 62, Spinner would be justified in thinking about retirement, but when he talks about his work, you get the impression that he loves it too much to stop.

After all, he's also the volunteer tree warden for Essex Junction, his town of residence. (Burlington, South Burlington and Rutland are the only Vermont towns with official city arborists.) He helped launch the 20-year-old all-volunteer group Branch Out Burlington! and is an ex officio board member. And Spinner serves on the council of the Vermont Urban & Community Forestry program, a collaborative effort of the state and the University of Vermont Extension.

Spinner, it's safe to say, sees the forest and the trees — and cares deeply about both. He's an integral piece of a growing Vermont network of plant and soil scientists, ecologists, orchardists, arboriculture volunteers and other "tree huggers" whose collective goal is, broadly speaking, to keep green things alive in Burlington and around the state. And if you wonder why trees are such a big deal, just try imagining your world without any. 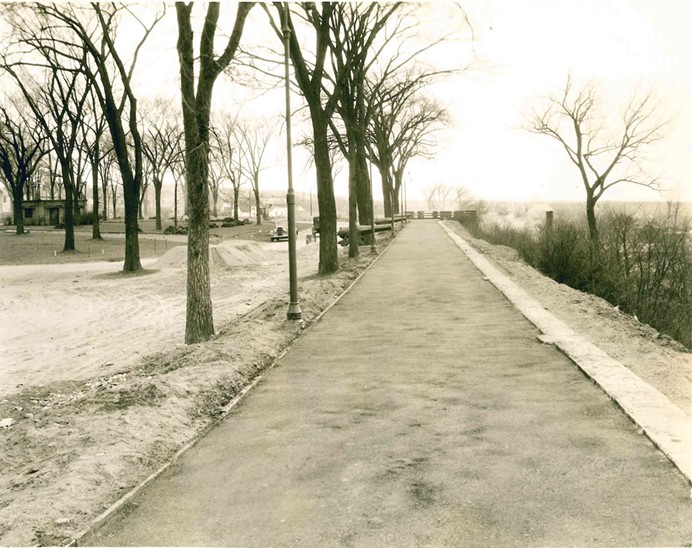 Photos: Burlington's Trees Through the Ages
Click to View 15 slides

A half century ago, Burlington residents didn't have to imagine: Dutch elm disease, which began to arrive in the States in the 1930s, had robbed the city of some 10,000 trees. The before-and-after photographs that Spinner keeps in his Pine Street office would suffice by themselves to propel his mission. They show residential streets left barren, sunbaked and lined with unattractive stumps after the disappearance of the thick, shade-providing canopies. That's to say nothing of the decimation of habitats for birds and other critters.

Indeed, protecting us from the sun is far from the only thing trees do, Spinner points out. He ticks off their many benefits: "cleaning the environment, providing oxygen, breaking up impervious surfaces ... and also social well-being," he adds. "People appreciate their beauty. And they provide a calming effect."

Spinner understands that most of us like trees while taking them for granted — with the exception, perhaps, of Vermont's beloved fall foliage. "But when arborists or foresters talk to people," he notes, "their eyes are opened."

That's probably why Spinner is generous with the time it takes to talk to people about trees — whether he's delivering a slide-enhanced lecture to a community group or waxing enthusiastic with a single curious reporter. He deserves to be proud of a career that has brought Burlington's urban forestry program "from nothing to one of the best in the country," as he puts it. And, given the known and likely consequences of climate change — the "No. 1" threat to trees, Spinner says adamantly — he's rightly concerned about the future of his life's work.

But then, the future is always foremost in the mind of an arborist. Every day — and particularly in planting season — Spinner makes decisions about the viability of individual trees or of species, not just for this year but for decades to come.

"Warren has been advocating for the city's tree infrastructure for a long time; we would not have as robust a system as we do without him," says Jesse Bridges, director of the city's Parks, Recreation & Waterfront Department. "You plant a tree so the next generation can sit under it."

Taking the long view is not so typical of politicians, and Spinner says he appreciates that his position is not a political appointment — he's retained his job through multiple administrations. But he's quick to applaud the efforts of one political leader in particular: Bernie Sanders. As newly elected mayor of Burlington in the early 1980s, Sanders laid out a number of progressive goals. One of them was the reforestation of his city.

"One thing Bernie didn't like was, there were not enough trees, especially in the Old North End," Spinner recalls. He estimates that 80 to 90 percent of the trees that once lined Burlington's streets were American elms, and many of those streets had still not been replanted after the elm disease's devastation.

The city started "a real tree crew" in about 1960, Spinner says, but it couldn't keep up with the removal of dead elms. "When I started, there were a lot of stumps to grind out," he remembers.

And so the new mayor tasked his young city arborist with a massive tree planting. "I had to manage Where do we find 500 trees, how do we plant, where do we put them?" Spinner says. The mayor's then assistant, George Thabault, began organizing ward by ward, soliciting volunteers. When planting day finally arrived, in late April 1983, Spinner recalls, "I had to color-coordinate the right tree to the right location before the volunteers showed up."

Spinner and dozens of helpers planted 600 baby trees in seven hours — "all greenbelt and curbside," he says. They did the same thing again in '84 and in '85. "And then I convinced Bernie to let me plant some bigger trees," Spinner says.

His crew — now four full-time, fully certified arborist technicians and, in the summer, five additional seasonal staff — has continued to plant trees every year. (The city loses an average of 80 trees per year, Spinner says.) Most of the baby trees are planted and nurtured at the UVM Horticulture Research and Education Center, which is maintained by Branch Out Burlington! (see story). This arrangement saves the city a great deal in tree costs, Spinner notes. A city tax passed in the early aughts — part of the street capital tax, according to Bridges — helps fund the approximately $350,000 annual budget for Spinner's crew.

That tax may well have won voters' approval because it came in the wake of another catastrophe for trees in Burlington and across northern New England: the ice storm of January 1998. Nearly half the city's trees, many of which Spinner had planted in previous years, were downed or sustained significant damage. Residents who walked around in a daze the following day, surveying the aftermath, were stunned into tree awareness. 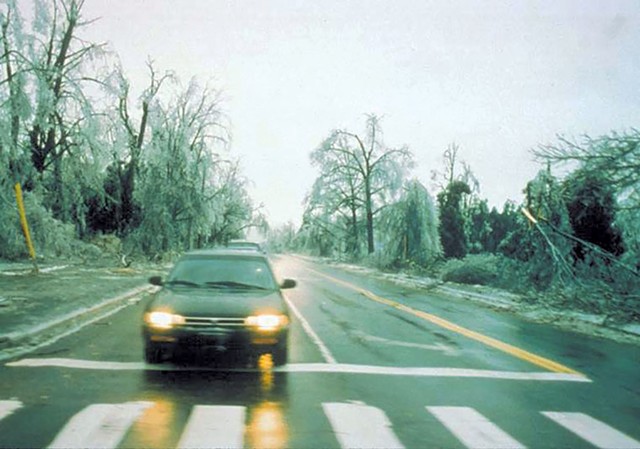 Spinner calculates that 10 to 20 percent of the city's street trees were lost in that storm. But the most heartbreaking losses, he told Seven Days at the time, were a few of the city's oldest, biggest trees, such as a surviving American elm at Ethan Allen Park, and another near the H.O. Wheeler School (now the Integrated Arts Academy). "More mass equals more ice," he said.

The ice storm was an arborist's nightmare. But Spinner took stock, joined forces with local crews to clean up the mess, and moved on. In the spring, he replanted once again.

No one can control the weather events that climate change may bring, but under Spinner's guidance, Burlington's tree population has been fortified by its diversity. Once home to a vulnerable monocrop of American elms, the city now boasts dozens of species. Spinner shows Seven Days a list of current transplants at the BOB! nursery; it includes 34 varieties, from bitternut hickory to Tatarian maple. There are also three types of elm, all bred to be disease-resistant.

One measure of Spinner's success is that Burlington earned the designation "Tree City USA" 22 years ago and has never relinquished it. "You have to reapply every year," Spinner explains of the Arbor Day Foundation program. The title means, essentially, that the city has met core standards of "sound urban forestry management."

Creating that massive tree database — which involved taking inventory of every tree in town, along with its condition and maintenance schedule — has helped the arborist and his crew meet those standards, observes Bridges. "And at the end of the day," he adds, "it's also about the aesthetics."

As the arborist for Burlington's public lands, Spinner has no jurisdiction on private property. But when he's asked what individuals can do to maintain healthy trees in their own yards, he readily offers three rules: Choose a good-quality tree for the location, plant it properly (not too deep!), and water, water, water.

Spinner knows plenty about coaxing things to grow — and Burlington residents will benefit from the labors of his love for many years to come.

The original print version of this article was headlined "Leaf Keepers"