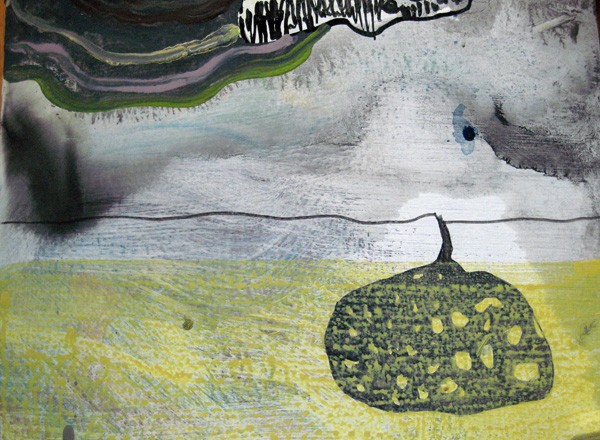 In Megan Lipke’s exhibition, hives, seeds, shells and branches amalgamate in abstract forms that tumble and cluster across wide expanses of paper and color.

Lipke is an accomplished artist who lives in Hudson, N.Y. Her exhibition at 215 College Gallery was curated by her mother and occasional collaborator, Burlington artist Catherine Hall. Hall selected the works in the show (a series of 16 acrylic pieces on paper) during a visit to Lipke’s studio. “What blows me away about these works is how direct they are,” says Hall. “They’re not fussed over.”

Indeed, despite Lipke’s clear sophistication, her works feel refreshingly unfettered and extemporaneous. They have the freewheeling candor of some “outsider” artists, with all the polish of the MFA set. Aesthetic friendliness can be difficult to reconcile with conceptual rigor, but Lipke navigates the line between them with apparent ease.

In her painting “Dividing a Day,” streamer-like strokes of semi-opaque white overlay black to create an uneasy middle-gray. This gestural matrix of lines loops over the expanse of the page, punctuated at intervals by greenish-yellow dots. The dots read like points on a confused map of a busy day.

Beneath the lines, geometric and organic painted forms collide and expand like intersecting priorities and relationships in that crowded agenda. A group of swirling black lines along the lower edge of the painting creates a form as energetic as it is compact. Lipke produces a mix of order and disorder that feels like a snapshot of busy American life, and is perhaps a commentary on its chaotic reality.

Artists often struggle with acrylic paint’s quick drying time and sometimes granular consistency. Lipke seems to embrace the medium, unfurling its potential in a beguiling variety of applications. She layers it in thin veils, builds it into chalky, opaque masses and paints it with a dry brush, letting the tooth of the paper cling to the bristles to create a brushy texture.

In “Earthly Beginnings,” thin, rust-colored washes of acrylic overlay branch-like shapes. In the lower third of the painting, a lumpy form composed of opaque bands of bright paint sits heavily on an atmospheric ground of dripping pale gray. The intense color and physicality of the painted shape make it feel corporeal — like a person wrapped in a blanket. Weight and life seem intrinsic to without being obvious in it. Combined with the title, this form evokes the mystery and physicality of pregnancy without relying on traditional visual cues. The viewer becomes aware of hidden life in a way that imitates the experience of an expectant mother.

Across from “Earthly Beginnings” hangs a large triptych that incorporates many of the techniques and motifs at work in Lipke’s other pieces. The first two panels share a palette and a visual lexicon — black, snakelike lines curve and glide between their rusty surfaces; a looped mass of persimmon-red seed shapes jumps the wall between the two panels. The third panel, however, stands apart. With its aqua blue ground crossed horizontally by brightly painted, serpentine forms, it reads like a visiting cousin to the twin-like other two. By hanging the three pieces as a triptych, the artist asks the viewer to fight the impulse to combine like with like. Instead, she joins the three, using a form that usually unifies to point out the separateness of the third piece.

“An interactive relationship between the viewer and the painting will raise questions that can’t be answered in any finite way,” according to the curatorial/artist’s statement for Lipke’s show, “and yet, if the work succeeds, there remains an aesthetic of pleasure that is found within the sensory experience of looking at the painting.”

In Lipke’s works, the viewer can wander through a landscape of wobbly lines and lumpy shapes, gauzy veils and staccato marks, and take pleasure in her painterly knack for the unexpected.