The air was cool and the leaves had started to change color on our family's annual trip to Allenholm Farm in South Hero in September.

The seventh generation Vermont apple orchard was started in 1870 by Reuben Allen and his son, Horace, and is now run by Ray and Pam Allen. In the span of almost 150 years, it's grown to include 25 acres of apple trees, boasting 20 different varieties, along with raspberry and blueberry bushes and tart cherry trees. The latter fruits are available throughout the summer, while the apples — the crop the farm is best known for — are sold locally and shipped in the late summer and autumn. The orchard has shipped apples as far as Montana, according to Pam, and can send them anywhere in the United States, except for California, Washington and Arizona due to agricultural restrictions. 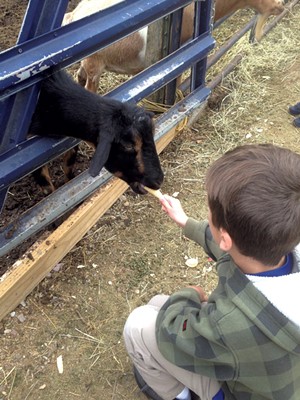 When we arrived, our 10-year-old son, Pascal, and his 8-year-old cousin, Destin, led us straight to the Petting Paddock. Here, the friendly farm animals include chickens, goats, a sheep, two miniature horses and a donkey named Willie. We purchased ice cream cones filled with grain pellets at a self-service box, and the boys laughed as the animals' furry, wet lips grazed their palms. Then they explored the playground, located in the center of the Petting Paddock, which includes giant tractor tires to play on, along with a climbing structure with a slide and fort underneath.

At the farm store, which smelled of warm apples and cinnamon, I prepped for apple picking by purchasing four half-peck bags to fill for $7 each, then headed back outside to wait for the next tractor-pulled wagon. Pascal and Destin inspected the selection of gourds and pumpkins lining the store's porch until the wagon arrived. We piled in with the other apple pickers for the five-minute ride to the orchard. 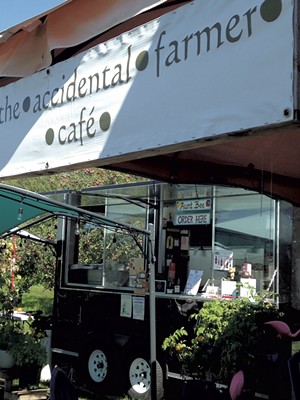 The trees were loaded with beautiful Cortland, Gala, Red Sweets and McIntoshes, the varieties available in September. (Crispin, Northern Spy, Red Delicious and Empire apples ripen for picking in October.) It took only a few minutes to fill our bags. The boys played an impromptu game of tag between the trees, tripping over the fallen apples, which are nearly impossible to avoid. Ribbons cordoned off certain areas of the orchard, where six paid apple pickers worked on tall ladders, filling bushels for wholesale customers.

Back at the main area, an on-site snack bar, the Accidental Farmer Café, was serving lunch, and we had worked up an appetite for the burgers and fries on offer. While we waited, we munched on apples and enjoyed the warm sun that offset the cool autumn breeze.

After our meal, we deposited the apples in the car and wandered into the store to peruse the offerings — everything from prepicked apples, maple syrup and maple creemees to pies made by "Papa Ray." Instead of buying a sweet treat, we decided to make our own apple delicacies at home. After a short stop to say goodbye to the menagerie of animals, we headed off into the crisp September afternoon.

Allenholm Farm is open daily from 9 a.m. to 5 p.m. until December 24 and is closed on Thanksgiving. Tour groups frequent the farm during the week, so allow for extra time to purchase your pick-your-own apple bags if visiting then. Find more information at allenholm.com.