Apocalypse Is Now in the Green Mountains Review 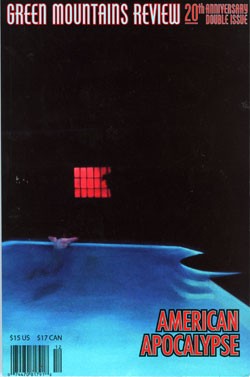 Water covers the streets of a nearly abandoned Manhattan. A couple huddles in their home under government quarantine after catching the plague from a stray cat. A weekend warrior desperately maintains his pristine lawn in the midst of a new suburban wilderness. A writer wonders how long he would survive doomsday holed up in Wal-Mart, “my one-stop-shopping ecosystem.”

Sound like science fiction? Maybe, but these days, apocalyptic notions have reached the literary mainstream. Witness the new 20th-anniversary double issue of Green Mountains Review, the award-winning literary journal housed at Johnson State College, in which all these worst-case scenarios appear.

Neil Shepard, who’s been editor of GMR since it first appeared in 1987, says he didn’t have to look far to fill the issue, called American Apocalypse. The poet and JSC professor explains in a phone interview, “Ever since George Bush took office, we’ve started receiving more gloomy poems and pieces of prose.” Shepard decided to open the dystopian floodgates by “calling for submissions of poetry, fiction and nonfiction, darkly comic or deadly serious, that center on American dread.”

Last year, he brought flyers announcing the special issue to an annual convention for faculty of BFA and MFA programs. “Flyers just started flying off the table,” he recalls. “I made a couple of thousand before it was over. The buzz was there.” Soon Shepard was sorting through more than 5000 manuscripts.

Though GMR accepts submissions from all over, a sprinkling of Vermont writers appears in the 272-page compilation. Local poets David Cavanagh, David Huddle, Greg Delanty and Stephen Sandy offer their dark visions.

Then there’s “Pucker Pie,” a provocative story from novelist Walter Wetherell, who lives right over the border in Lyme, New Hampshire. In it, a family driving through Vermont for a vacation getaway gets swept up in the mob frenzy of the farewell concert of a band called Pucker Pie, which sounds suspiciously like Phish. When the band cancels their appearance amid torrents of rain, angry young folk in expensive cars swarm rest stops and set things ablaze, and a middle-aged dad struggles to protect his young daughter from this party that looks a lot like the end of civilization.

After wading through all those manuscripts with his staff, will Shepard ever want to read another vision of doom? “I’m not sick of it,” he says. Readers who feel the same can purchase American Apocalypse for $15 at megastores and “literary” bookstores such as Bear Pond Books, or for $16.50 by mail. For info, visit http://greenmountainsreview.jsc.vsc.edu.