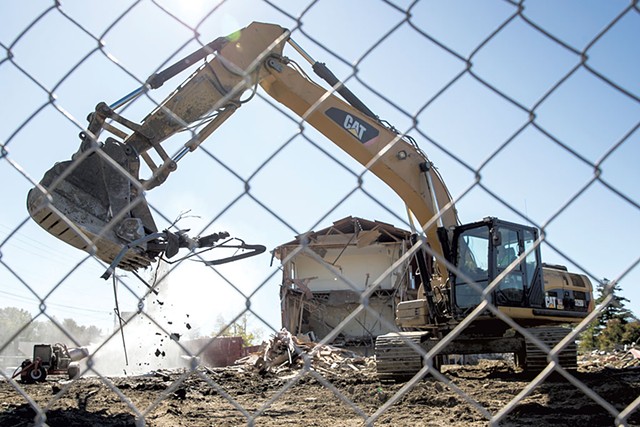 Jennifer Bliss helped her daughter, Kayla, out of their car with the 5-year-old still swathed in a pink tutu from dance class. Then they headed into their South Burlington digs — not on a suburban cul-de-sac, but in a new, five-story apartment building amid a sea of car dealerships. The building is a residential oasis in a commercial zone, but it's a well-equipped one, with Lake Champlain views, stainless steel appliances and an outdoor pool.

"They have garden plots, exercise rooms — really great amenities," said Bliss, an accountant who moved with her family from Florida to the Bartlett Brook Apartments on Route 7 in the spring.

Increasingly, homes being constructed in the bedroom community next to Burlington are multifamily apartment buildings or condos. South Burlington is tilting toward dense development close to jobs, shops and entertainment.

That's a major shift for a burg known as a Vermont exemplar of suburbia — a community that pioneered plowing fields under to make way for single-family homes.

Reaction is mixed: There's concern about traffic and the loss of open space, but applause for the construction of sorely needed rental units. Housing advocates say that's key to controlling costs.

That's still short of the 5 percent rate they say would reflect a healthier, more affordable housing market. But it's progress, advocates and political leaders said at a press conference held last week in South Burlington to promote the goals of a coalition called Building Homes Together.

The campaign, launched in 2016 by nonprofits Housing Vermont and Champlain Housing Trust and by the Chittenden Regional Planning Commission, is promoting the construction of 3,500 new homes and apartments in Chittenden County within five years. In the first year, construction of 916 housing units exceeded the annual goal of 700. About 133 of the units were built in South Burlington, and all but 30 of those were in multifamily housing.

At the press conference, Gov. Phil Scott hit on one of his favorite themes: affordability.

"After listening to thousands of employers and Vermonters across the state, what I consistently heard was that one of the barriers to attracting more families and young professionals to Vermont is the [lack of] availability of decent, affordable housing," he said.

So far, the burst of apartment construction has not resolved a need for affordable housing across the region, housing advocates say. And the demand for higher-end apartments could wind up squeezing out cheaper rentals.

That's what's happening at one property on Route 7 in South Burlington, across the street from McDonald's. Last week, the extended-stay hotel Larkin Terrace, where former tenants paid as little as $200 per week, was being demolished to make way for a new 60-unit apartment complex. It's unclear what the new rent will be, but renderings show a handsome building that looks like a major step up architecturally from the dilapidated complex being razed.

While some renters want pools and game rooms, others would be happy merely to have some money left over for groceries after they cover the rent. Brenda Torpy, chief executive officer of Champlain Housing Trust, emphasized that there is more work to be done. Ten people apply for each apartment in the trust's portfolio of 1,500 rental units around the county, she said.

Only 8 percent of the units built last year were for lower-income tenants or buyers, while the campaign strives to reach an annual goal of 20 percent.

After years of fostering suburban sprawl with its zoning, South Burlington now encourages denser, mixed-used construction in parts of the city. This is especially true in the City Center district on the east side of Dorset Street, running along the woodsy Market Street. In this mostly undeveloped area, the city's master plan and zoning promotes a pedestrian-oriented downtown that would help give South Burlington a focal point and allow multistory apartments and condos, offices and shops.

Along with similar downtown-style construction in Winooski, Essex Junction and Williston, the push in South Burlington reflects a growing interest in downtown living and development. "It's a resurgence," said Paul Conner, South Burlington director of planning and zoning.

In 2015, the city council voted to create a housing trust fund to subsidize affordable housing and agreed to allocate $50,000 annually to the fund from the city budget.

South Burlington officials and housing advocates are touting the construction of the $10.6 million, 39-unit Allard Square, a four-story affordable senior housing building with various subsidies, which is to get the first allocation from the trust fund. Builders will break ground on the project this month on Market Street.

The city deserves praise for encouraging centrally located development, be it at the designated downtown or at infill locations near transit and jobs, such as the apartments and condominiums on Farrell Street next to Shaw's grocery store, said Brian Shupe, executive director of the Vermont Natural Resources Council.

It gets low marks, though, for allowing too much housing on outlying farm fields, he said. "The concern in South Burlington is, they seem to think every place is the right place for density ... They seem not to know when to say no."

Many projects are in the pipeline in "SB" — as residents often refer to the city. They include nearly 500 units of housing — duplexes and single-family homes off Kennedy Drive and Old Farm Road in an O'Brien Brothers Agency project to be phased in over five years. The Larkin project is on tap, and another 49 units will be built nearby, just north of the Palace 9 movie theater on Fayette Drive.

Also under discussion: a controversial proposal for possibly dense housing on a swath of University of Vermont-owned forestland and fields along Spear Street. UVM announced plans to sell the property in June and is finalizing a deal with brothers Frank and Ed von Turkovich of South Burlington.

They declined to discuss their proposal, saying they will share their ideas with South Burlington residents — including skeptics — when the land sale is completed.

Despite the lack of public plans, opposition is gelling. Sarah Dopp, president of the South Burlington Land Trust, a local citizens' group that raises money to conserve land, is leading the opposition to a proposed city zoning change that would allow housing on a portion of the UVM land zoned for institutional/agricultural use. The forestland provides a habitat for animals, trees that help clean the air and an important greenway for people to enjoy close to home, she said.

"I feel really strongly that all communities ought to have some green lungs around them, and that shouldn't be reserved just for the Northeast Kingdom," Dopp said. "Especially in Chittenden County, we need to preserve some of these areas ... We can't pave the whole county over, I hope, although we're making a pretty good effort of it."

South Burlington is technically a city but for years didn't look like one. Dopp grew up in the Mayfair Park neighborhood off of Williston Road. It was one of the first suburbs in what was then a rural landscape. Not far from the sidewalks and colonials in Mayfair Park, Dopp said, were the dirt roads, barns and pastures covering most of South Burlington.

"It was just another world — quiet and lots of cows around, farming operations and cutting hay," she said. "It was idyllic."

Many of those farms were converted to streets lined with single-family homes in the 1970s, '80s and '90s. That was before apartments and condos came to dominate development.

Various factors are driving the trend in South Burlington, real estate analyst Mark Brooks suggested. Its zoning laws allow for higher density, there's a strong demand for apartments and the city is conveniently located, he noted.

New units in Winooski, Williston and parts of Burlington are pricey, and South Burlington is no different. Bartlett Brook one- and two-bedroom monthly rents range from about $1,485 to $2,185.

The building is within a mile or so of grocery stores, Interstate 189 and Orchard School. Bliss sometimes rides her bicycle towing her daughter in a trailer along the sidewalk to Orchard, where the girl started kindergarten this year. But traffic is heavy on Route 7, and it would be nice to have a bike path in the area, she said. And while Veterans Memorial Park and Red Rocks Park are within a few miles, there's no park with ball fields and a playground nearby. Their apartment building can seem like a residential island in an area planned more for cars than for people.

The city is aware of the need for amenities near new residential construction and wants to increase sidewalk and bike connections as well as parks, Conner said.

Bliss' neighbor, retired teacher Maida Atkins, lives at Bartlett Brook with her husband. They have a condo in Florida and spend part of the year in Vermont. Atkins has enjoyed getting to know Bartlett residents of all ages, including a young mother with whom she swapped garden fare from their respective plots last week. Multifamily or single family, a neighborhood comes down to the people.

"I gave her tomatoes; she gave me potatoes," Atkins said. "There's lots of that kind of thing — it's really nice."