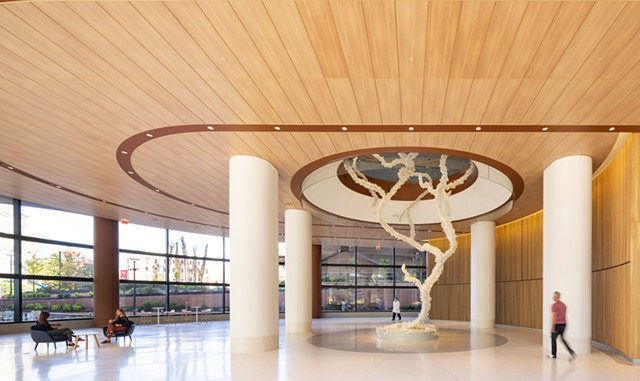 More than 15,000 handblown glass globes made in Burlington are featured in a sculpture designed by internationally acclaimed artist and architect Maya Lin. Her towering piece, titled "Decoding the Tree of Life," stands 40 feet tall in the atrium of a new hospital building in Philadelphia.

The $1.6 billion, 17-story Pavilion at the Hospital of the University of Pennsylvania (HUP) opened on Halloween weekend. Its centerpiece, spanning two floors and visible from the street, is Lin's installation: a steel armature to which are affixed elements created by AO Glass, which has a workshop and showroom in Burlington's South End. Imagine about 15,500 glass balls — each distinct from the others — layered over a structure of substantial height and grace.

AO produced the globes in the spring and summer after landing the job on the recommendation of another glass artist.

"It was really a whole studio effort," said Rich Arentzen, cofounder of the business.

Lin's "tree" is fashioned from stainless steel forms arranged in a pattern that resembles branches reaching skyward. At its base, strands of AO's spheres seem to represent roots. While the artwork evokes shapes in the natural world — including the Schuylkill River, which runs through Philadelphia — it also represents the networks in human DNA, the artist has said.

"Maya wanted it to be honest, showing how this thing was built and pulled together, but we also wanted the structure to disappear when you look at it as one piece," said Betsy Jacobson, a project manager for Lin's sculpture. "The opacity that we landed on, when you're able to layer the globes on top of each other, really helps with that."

Lin is best known for designing the Vietnam Veterans Memorial in Washington, D.C., when she was still a student at Yale University. The monument, a long wall inscribed with more than 58,000 names of U.S. military members who died in the war, was dedicated in 1993.

Seven Days' efforts to reach Lin were unsuccessful, but she described her new work in a release from Penn Medicine, the health system to which HUP belongs.

"My approach to this piece is to create something that is uplifting, that has a sense of wonder and beauty," Lin said. "I want to make you aware of your surroundings in the Pavilion, in this beacon of scientific advancement, connecting you to the physical and natural world around you while symbolizing the very essence of life—DNA."

According to Arentzen, working on Lin's project was a highly involved process and a significant honor.

"It's a real highlight for AO Glass to have grown to the point at which we would be considered a reliable candidate to produce this for such a high-profile artist," he said, "and that we were able to do it."

Arentzen added that he couldn't think of a more meaningful place than a hospital for an exhibition of AO's creations.

"Hopefully, it gives people a moment of solace in an otherwise stressful situation," he said.

Arentzen founded AO Glass in 2007 with his wife, artist and designer Tove Ohlander. In its early years, the company was a small artisan studio in which the two glassblowers, along with a third craftsperson, made handblown bowls, vases, glasses and other items. Ohlander uses a Swedish technique called graal to engrave designs and illustrations on certain objects.

In 2014, the company began to shift toward what it is today: a workshop that produces handblown, pressed and cast glass objects and employs 26 people.

AO makes lighting fixtures for Hubbardton Forge in Castleton, bottle stoppers for WhistlePig distillery in Shoreham and its own line of beer glasses imprinted on the base with the Black Lives Matter raised fist, among other pieces.

"What I'm most interested in now is creatively constructing a place where people can have secure work," Arentzen said, "in a way that's based on a craft that I've really dedicated my whole adult life to."

The Lin project came to AO Glass through Michael Scheiner, a Lin collaborator and noted glass artist and fabricator. He's the founder of Keer Glass Foundry in Central Falls, R.I.

"It was a big deal to choose [AO Glass]," Scheiner told Seven Days by phone. "I knew that they'd be a good facility because they're sensitive to the artistic concerns. I think Rich is an amazing person. He's creating a community there, an environment that's good for other artists."

Scheiner worked with Lin on the design and aesthetic of the sculpture's glass globes, creating prototypes. He visited AO Glass in the spring to help set the project in motion and train the blowers on certain facets of the job.

At the Burlington studio, Scheiner said he recognized and appreciated the qualities that he thinks are at the heart of glassblowing: sharing information and ideas, teamwork, and being open to trying new things.

For four months over the spring and summer, AO dedicated half of its resources — people, space and equipment — to making globes for the Lin installation.

The clear spheres range in diameter from one and a half inches to four inches. Each was handblown and given a distinct look, marked by tiny translucent bubbles and little white lines that resemble etchings. This latter effect was achieved when, after gathering the first of two layers of glass, the glassblower dunked the ball in a water and baking soda solution.

"The look is trapped [between those] two layers," Arentzen explained. 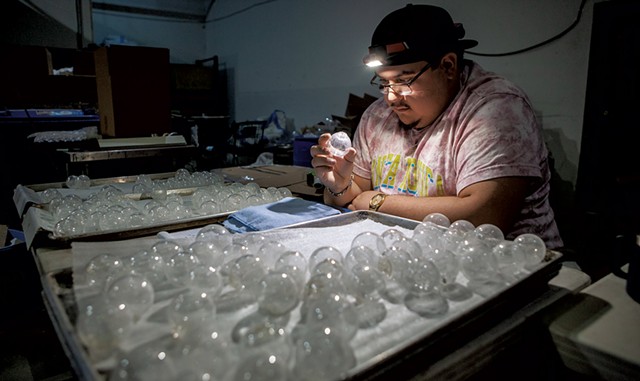 One AO employee, 20-year-old Sebastian Govoni, said he worked on a few aspects of the project and "slowly became a QC expert" — meaning quality control.

Every day during production, Govoni would strap on a headlamp, pick up a sphere and spin it in his hand, meticulously inspecting it for tiny cracks. If he found one, "the ball is pretty much trash at that point," he said. Govoni examined about 13,000 globes.

"When I saw pictures of the final product," he said, "I was kind of blown away by the beauty of all these little pieces I looked at that became the larger piece of art."

The steel elements of Lin's sculpture were fabricated by a company called UAP, which has an office in Manhattan and a metal workshop in the Hudson Valley. Jacobson, project manager for UAP, said the sculpture installers in Philadelphia had considerable artistic license.

"The glass spoke for itself," she said. "It lands where it wants to land."

According to Scheiner, Lin appreciated the work of the collaborators who realized her design. "I think she was very happy with all the input from all the people who worked on it," he said.

Arentzen said he and Ohlander plan to go to Philadelphia to see "Decoding the Tree of Life."

"It's a little bit like great music," he said of the sculpture. "It's able to draw you in, [and] there's always more to see. But you can get the idea of the melody immediately."

The original print version of this article was headlined "Blown Away"