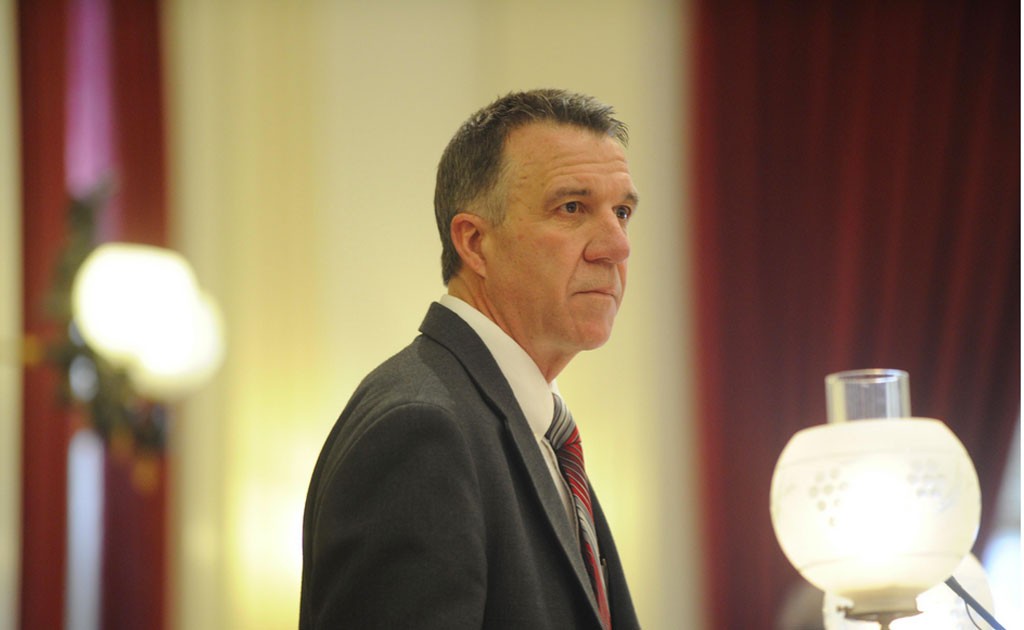 For the past 15 years, Phil Scott has served as a state senator and lieutenant governor while simultaneously running DuBois Construction, a Middlesex excavation business he co-owns. During that time, DuBois did $3.79 million worth of business with the state — an average of $252,335 a year.

That changed last week when Scott announced he's running for governor next year. His political rivals suggested that, at the very least, there's an appearance of a potential conflict. They question, if Scott's elected governor, whether state workers would feel even an unspoken pressure to help out the boss' old company by tossing DuBois a few state contracts.

"I think it's incredibly difficult to wall yourself off from decisions made by someone working for you that will ultimately benefit you as owner of the company," says Matt Dunne, a former state senator and Democratic candidate for governor.

Scott's other political rivals offered up similar thoughts — and raised questions about whether Scott's company should have been doing business with the state all along.

The 57-year-old Republican is in a unique position. Plenty of governors — including the current one, outgoing Gov. Peter Shumlin — have owned businesses before they won election to the state's top office, but none in recent history has done business with the state.

Does Scott's situation pose a real conflict — or is it a manufactured controversy? The voters will ultimately decide, but the issue brings up interesting questions and potential pitfalls for Scott's critics, who might find their fingers are pointing back at their allies — and themselves.

Elected officials in such situations should sell their businesses, says Stephen Spaulding, senior policy counsel and legal director at the Washington, D.C.-based open government advocacy group Common Cause. The next best thing would be to establish a blind trust — but Spaulding says trusts are never entirely blind.

Scott, who's owned DuBois Construction with cousin Don DuBois since 1986, says he consulted lawyers and thought hard about what to do with his business before announcing last week that he would run for governor. His main goal, he says, was making sure the company, which employs 30 workers, survives. Selling wasn't a realistic option, Scott says, either for him or the employees who depend on DuBois.

"I think it's perfectly reasonable and essential that someone contemplating this position separate themselves from their business," Scott says. "I'm not sure it's reasonable to ask a family-business owner to give up something that they spent so many years building. I think transparency is the answer."

State contracts are public, Scott notes. They typically go to the low bidder in a process in which all the competitors are vetted. Such contracts — most with the Agency of Transportation for jobs such as digging culverts — account for roughly 10 percent of DuBois' business, though the amount varies widely by the year, Scott says. DuBois does earthwork — roads, water, sewer, site preparation — but not construction.

Scott considered ending the company's business relationship with the state, but "that wouldn't be fair to my partner," he says.

So he decided he'd likely put the company in a blind trust that would insulate him from decisions, including which state contracts DuBois should bid on. It's an unusual use of a blind trust. Most elected officials who employ such an arrangement are insulating themselves from decisions about investments.

Critics say everybody will still know DuBois is Scott's company.

"I don't see how that fits the definition of a blind trust," says Dunne, adding that if he's elected he would sever ties with his employer, Google.

"I'm not sure I would make the same decision," says Shap Smith, a Democratic candidate for governor. If he gets the job, Smith says he'd leave the Burlington law firm Dinse Knapp McAndrew, in which he is a partner.

Asked about Scott's dilemma, Republican Bruce Lisman, who's retired after a career on Wall Street, said via email: "It may be that that his only solution if he retains ownership is not to bid on state projects or those that the state has either administrative or monetary oversight. The people of Vermont need a conflict-free governor."

Democrat Sue Minter agrees, noting she left her job last week as Agency of Transportation secretary to avoid a conflict of interest as she launched her own campaign for governor.

"I really think that there is a potential appearance of a conflict of interest," Minter says.

But Minter's former position — running the agency that doles out such contracts — illustrates the complications.

As secretary of transportation, Minter says she questioned a couple of contracts between the agency and DuBois Construction, knowing that the lieutenant governor co-owns the business.

"I was concerned about a potential conflict," she says.

Minter says she sought the advice of the attorney general's office. The answer: The DuBois contracts posed no problem.

Attorney General Bill Sorrell says Vermont doesn't have a state law that prohibits an elected official from doing business with the state. If a contract is awarded through a competitive bidding process, he doesn't see a legal problem.

Practically speaking, Sorrell says, state officials in a Scott administration would want to be able to prove the contract was awarded to the lowest bidder and that the job was done right. "A commissioner or secretary making a decision on a service or product would be mindful of that fact — is this a sweetheart deal?" he says.

The issue never arose during Scott's three campaigns for lieutenant governor, but his rivals now also question whether Scott should have been allowed, as a state senator, to bid on state contracts. For several years, he chaired the Senate Institutions Committee and served as vice chair of the Senate Transportation Committee, both of which oversee state construction contracts.

Dunne served in the Senate with Scott for some of those years.

"I had no idea he was part-owner of a company bidding on state contracts," Dunne says.

A governor, as the head of state government, would have even more of a potential conflict, Minter says. At the same time, Minter defends the state bidding process.

"There's a very clear set of guidelines," she says.

"If they're accusing me of some kind of collusion, it takes a couple of people to make that happen," Scott says.

In the Senate, Scott was appointed and reappointed as committee chair and vice chair with the backing of Democratic Senate leaders, including Shumlin and his predecessor as Senate president pro tem, Peter Welch.

"They trusted me," Scott says.

Scott also served in the Senate and as lieutenant governor through three administrations — two Democratic and one Republican. If he was getting special treatment on contracts, Brian Searles might know something about it. Minter's predecessor ran AOT in the administrations of both Shumlin and former governor Howard Dean.

"I'm not aware Phil Scott ever asked for or received special consideration on any transportation project. It's not a subject we ever talked about," says Searles, who retired at the end of last year.

Nor, he says, is there room in the system for a state senator, a lieutenant governor or a governor to fix contracts.

"It's a process that's highly audited by the federal government," Searles says. "Even if a secretary had that thought cross their mind, it's a very clean process."

Former Republican governor Jim Douglas, a Scott supporter, says the governor's office does not get involved in individual state contracts, which go to the low bidder, except in rare circumstances.

"I have confidence there's not going to be any undue influence from the fifth floor," he says.

Douglas says that when he was secretary of state in the 1980s, he wanted to stick with a contractor that had long printed election ballots, because the company knew what it was doing. But a new, lower bidder won out.

"I was secretary of state, and it wasn't my call," he says.

Just before the general election, that new company went under, Douglas recalls.

Scott says that if he were manipulating the system to get more contracts, his company would likely have a better success rate at snaring them. Instead, he says DuBois wins just 3 to 5 percent of the jobs for which it competes.

"If there was any collusion, I guess the proof is I'm not very good at it," he says.

Other states have ethics commissions to rule on such situations. Lisman says "it's time" for one in Vermont.

But will that provide all the answers? Maybe not.

In 2013, Dan Wolf, a state senator in Massachusetts, launched a campaign for governor there. But the state ethics commission ruled that he couldn't run because his business, Cape Air, had contracts to use state-owned Logan International Airport. Further, the commission ruled that Wolf could not continue serving in the senate. He resigned his seat and ended his campaign for governor.

The outcry was strong enough that the Massachusetts ethics commission changed the rule, allowing an elected official to continue existing state contracts. It was too late for Wolf.

Down on the Farm

As Sen. David Zuckerman ponders the idea of running for lieutenant governor, he and his family wanted to get a better sense of what the job entails. So the pony-tailed Progressive/Democrat representing Chittenden County invited Lt. Gov. Scott, a Republican, over to his Hinesburg farm.

"My daughter said, 'Can we hear from the guy who has the job?'" Zuckerman says.

And because this is Vermont, Scott went. The farm confab took place last month, before Scott announced he's running for governor — rather than for reelection as lieutenant governor. So, technically, Zuckerman notes, "There was the potential I'd be running against him."

Zuckerman's 9-year-old daughter Addie quizzed Scott, carefully taking notes. She wanted to know how much time the job — presiding over the same Senate chamber where Zuckerman serves — would take.

Dad learned some things, too.

"There's more to the job than what people see in the Statehouse, in terms of going around the state and talking to people," he says.

Zuckerman, one of many considering the part-time gig, says he wants to run but has to figure out how it would impact the farm and family. Would it interfere with spring planting? He's not sure yet.

Scott, who was weighing his own campaign decision at the time, says he offered no should-I-run advice — just facts.

"I'm willing to meet with anyone in my role as lieutenant governor," he says.

Based on the number of politicos considering a run for the office, he could get very busy.

Sen. Marco Rubio (R-Fl.), the GOP presidential candidate, popped into Vermont last week for a low-profile fundraiser. It was at the Shelburne home of his Vermont campaign chairman, Skip Vallee, owner of the Maplefields gas station chain and George W. Bush's former ambassador to Slovakia.

Rubio deftly avoided any contact with the general public. But Vallee says the turnout was "very nice" and the fundraising "very successful."

"They don't need me to do the press' job," Vallee says.

The original print version of this article was headlined "Anybody's Business?"