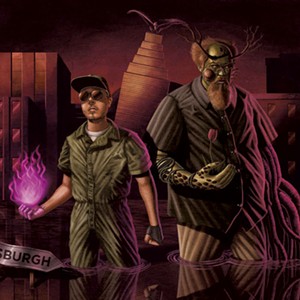 The duo of Antwon Levee & Dust hails from scenic Plattsburgh, N.Y. Over the years, they have built a rock-solid reputation as purveyors of quality beats and rhymes, churning out singles, remixes and collaborations. Their latest offering, Lake Effect, is gloriously out of step with the times, not just aesthetically but also sonically.

Resurrecting an '80s rap template that was built from drum machines, not drum loops, Levee updates the formula while drawing from MF Doom and Skinny Puppy in equal measure. It may sound old school, but it's all homebrewed: "No samples to clear, cuz this shit's on me," as he puts it on the interlude track "A Word From Antwon Levee." Helping him throughout are the clever fingers of multi-instrumentalist Austin Petrashune, who shines on both bass and guitar.

Lake Effect picks up right where the duo's 2020 LP Bruise Music left off. Album opener "Us" flips the outro of their previous project into an intro hook over some deft scratchwork from DJ Rest. Dust hasn't lost a step, delivering an intricate verse packed with gourmet shit-talking. The song also features a charismatic and capable verse from Levee himself, who steps up to the mic in the second half. The beat is a dark, crushing masterpiece that's half East Coast menace, half West Coast funk.

Up next, the title track is monumental, delivering an anthemic hook and some Earth-shaking synth lines. Things take a sharp turn on "Pickled Peppers," a more whimsical cut that features Dust and Levee trading goofy, tongue-twister bars. The exquisite chemistry leaves you wanting more. (Spoiler alert: You will get more.)

From there, well, shit gets weird. The middle passage of Lake Effect is a labyrinth of sometimes self-indulgent but always highly entertaining experiments. Where Bruise Music focused on more straightforward songs, the duo's latest has a mixtape feel, which is no complaint. It's loose, limber and full of energy. There are some knockout singles along the way, such as the catchy "Nuke" and the pro rasslin' tribute track "Oh What a Rush."

The album's closing trilogy is pure murder. "Leviathan" reprises the duo's back-and-forth rap style with tight, brilliant wordplay from both MCs. For my money, it is the single best song that Levee and Dust have ever done.

"Urgency" is a bleak, boom-bap workout from Dust. Closer "News" is a subversive, jarringly upbeat cut that makes the most of Petrashune on bass and backup vocals.

I hope this digital release gains more traction, because the cover art, courtesy of Ultimate Ink Trash, is bonkers and iconic stuff. I would buy a physical copy in a heartbeat; this is something I'd love to bump on back roads. Lake Effect is not for everyone, but this is another potent set from one of the best and most original hip-hop duos in the area.

Lake Effect is available at antwonlevee.bandcamp.com.