In 2007, Paul Zlotoff bought 180 acres in South Hero with an RV park, a marina, a defunct convenience store and a farmhouse that belonged to a member of the Allen family — yes, those Allens. The site, which also includes a golf course, is called Apple Island Resort.

But Zlotoff, a 72-year-old businessman from Michigan, didn't buy the property for its acreage or amenities. He wanted the big red barn, built in 1900, that stands on a rise just off Route 2.

"I only bought the RV resort to get the barn," he said.

The building was just the right place for the Arnold Zlotoff Tool Museum. After a major restoration of the timber-frame structure, the free museum opened in 2008. It displays the vast and varied tool collection that Zlotoff's late father, Arnold, amassed over about four decades. He cataloged each piece, noting on an index card what the tool is, when and where he purchased it, and its price, according to Paul.

An industrial arts teacher at a public junior high school in New York City, Arnold collected roughly 3,000 tools and implements. The majority of the objects are 19th-century woodworking tools, but the collection includes specialties such as tools used by wheelwrights and carriage makers, coopers and loggers. Displayed among the crosscut saws and hammers, the planes and prying implements, are a set of eclectic items: poultry yokes and eel spears, a broom-making machine, and a mortar and pestle made from a hollowed-out tree stump.

Arnold, who was born in 1922, began collecting tools when he was student at a teacher's college in western New York following his service in World War II. He needed tools for his shop class, Paul said, and answered a classified ad from a woman who was selling a wooden chest filled with her father's tools.

"They had a bit of an antique quality," Paul said. "And while my dad used them, it piqued his interest in older implements. I think he largely was motivated by the independent self-sufficiency — and ingenuity — of the early Americans."

About 2,500 objects collected by Arnold fill shelves in the barn, according to Ted Ingraham, a woodworker and restoration specialist from Ferrisburgh who is executive director of the museum. Another 500 or so items are in storage. Ingraham, 75, himself a collector of antique woodworking tools, wrote interpretive signs that describe and explain the Zlotoff collection. The tools harken back to a time when people had to make what they needed, he said, including tools.

"People nowadays have no idea how to make something if they don't have an electric tool," Ingraham said. "Something they can plug in, like a drill or a skill saw."

Loggers of a bygone era used axes to cut down a tree and crosscut saws to cut logs. They pounded an identifying mark, often an initial, into the butt-end of logs with a log marker to identify trees they felled. Wheelwrights measured the circumference of a wheel with a circular tool called a traveler. They welded iron to form around the wooden wheel, hammered it in place and poured cold water on it to shrink it.

"People didn't have machines to depend on for anything," Ingraham said. 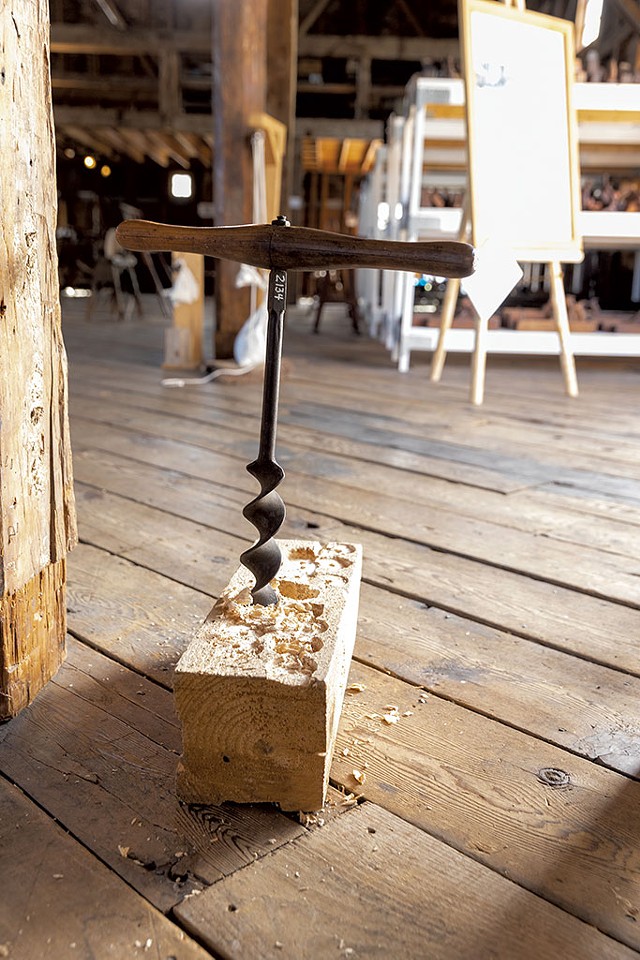 Paul Zlotoff, the oldest of Arnold's three sons, is chair of a Michigan-based real estate and private equity company called Uniprop. He grew up in Rockaway, Queens, in a house filled with his father's tools and other antiques. In addition to teaching, Arnold worked weekends as a handyman. In the summer, to get his boys out of the city, Arnold was a maintenance man at summer camps in upstate New York and New England.

"My father had a work capacity unlike anyone I ever knew," Paul said. "He was amazing."

On his day off at the summer camps, with his little kids in the back seat of his 1950 Chevy sedan, Arnold drove around New England looking for antique tools and furniture. The Zlotoffs went to estate sales, checked out the contents of old barns and visited dealers.

"We'd get dragged along, and the truth is, we hated it," Paul said. "Sitting in the car, and there was nothing for us to do."

At the end of the summer, the family drove back to the city in a car filled with Arnold's finds. He built a custom roof rack to transport the goods, boxed and covered in a tarp. The kids, often left seatless, eked out space for themselves in the Chevy, Paul said.

"God bless him," Paul said. "He would figure out a way to load it up."

In retirement, Arnold and his wife, Ruth, lived in Orlando, Fla. A "space-engineering genius," as Paul described him, Arnold packed up his tools and shipped them to his new home. In his will, he left Paul in charge of the collection, to do with it what he thought best.

Building the museum was, in part, what led Paul to buy a summer home in South Hero in 2002. He had a little attachment to New England from college at Brandeis University in Waltham, Mass. Beyond that, he enjoys the activities that Vermont has to offer: sailing, swimming, cycling and hiking. And he thought his father's tools should return to the region from which they originated.

"I don't want to have a midwestern museum about pieces that belong in colonial America," Paul said.

Five years after moving to South Hero, he learned the RV park with a run-down barn was for sale.

"I let the tail wag the dog," Paul said. "I bought the whole damn property because I said, 'That barn is the right place for the museum.'"

The museum is open Saturdays, 10 a.m. to 4 p.m., from Memorial Day through October 8, with a guide on-site. Four accompanying videos, viewable on the museum website, explain how the tools were used.

Also on view in the barn, on the level below the tool exhibit, is a rotating display of Paul's antique and classic cars and motorcycles. Half a dozen automobiles from Paul's 40-car collection, which includes Jaguars, Alfa Romeos, Triumphs and Ferraris, occupy exhibit space in the barn.

He keeps the full fleet in a 12,000-square-foot building equipped with a shop, an office and storage space. The vehicles comprise a newer section of the museum, having been on display for two or three years.

"There's more interest in cars than there is in antique tools," Paul said. "I'm realistic about that, too."