Answers to Your Questions About Local Oddities

The Green Mountain State is a strange place — it’s part of the charm. There are things about life here that make even seventh-generation Vermonters stop and say, “What the eff…?”

To help make sense of it all, we at Seven Days search high and low for answers to questions about local quirks in a column we call Whiskey Tango Foxtrot. (WTF — get it?) Check it out every other week in the paper or online, and read on for some of the most interesting and flat-out bizarre queries we’ve addressed over the years. If you’ve got a mystery you’d like us to solve, let us know at wtf@sevendaysvt.com.

Why is Burlington abbreviated as BTV? Shouldn't it be BVT?

The Queen City's dyslexic shorthand is indeed a mystery. And the answer is fairly unsatisfying: BTV is simply the airport code for the Burlington International Airport. Why not BVT? No one knows.

When commercial aviation took flight in the 1930s, the Federal Aviation Administration gave every civilian airport in the country a unique four-letter code. (Fun fact: Airport codes all technically start with "K," but that letter is usually left off your boarding pass.) Most of the codes make sense: BOS for Boston, ATL for Atlanta, etc. But for reasons no one has stepped up to explain, Burlington was given BTV, even though there isn't another airport in the world coded as BVT. Weird, right?

Seriously, what's up with the "cut consumption not foreskin" house on Burlington's Colchester Avenue? And why is it purple?

Don't worry; the "foreskin house" is not some weird frat. The house has long been painted purple with pink polka dots — it was a childhood dream of the enigmatic owner, Jerri Kohl. And in 2009, Kohl — a software developer, environmentalist and maybe-nudist who moved to Vermont from the Bay Area — painted the slogan on his house as a two-pronged statement advocating sustainability and decrying circumcision, which he sees as genital mutilation.

"The message really is that simple," Kohl told Seven Days, adding that he wanted the statement to be humorous but provocative. "There's nothing hidden."

Well, except maybe one thing. 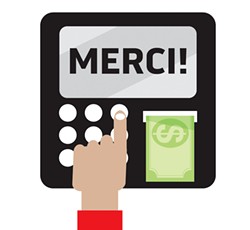 Why don't more ATMs in downtown Burlington offer a French language option? That's a great question. All we can really say is, Nous ne savons pas! (We don't know!)

By our count, only two of the eight banks and credit unions downtown allow you to do your ATM banking en français. That's odd, given that there are more than 10,000 native French speakers in Vermont, and several times that many who visit annually from Québec — that's our neighboring Canadian province, BTW. There were roughly 480,000 Québécois visitors to Vermont last year alone, and they spent about $105 million. That's an awful lot of loonies to pass back and forth in a foreign language — in their case, English.

A spokesperson at one local credit union told us his facility hadn't added a French option "for no real scientific reason," but that they probably should to accommodate all of our French-speaking friends. On the plus side, at TD Bank's downtown ATM, customers can choose from 14 languages, including Shqip, the national language of ... Albania. Sacré bleu!

Does Mike Myers live in Vermont? Cuz I'm pretty sure I just saw him at City Market.

We can neither confirm nor deny that the Canadian comedian who played Austin Powers and Wayne Campbell from Wayne's World owns a home in Vermont. But given numerous sightings around the area in the last year or so, we're pretty sure he spends some time here. His handlers — and numerous local real estate agents — refused to shed any light on the matter when we looked into it. We suspect that's probably because Myers, if he did indeed buy a home here, wants to be left the hell alone.

Plenty of other famous types find refuge in the Green Mountains. Actors Luis Guzmán and William H. Macy have homes here. Songwriter Neko Case lives in the Northeast Kingdom. Why? For one thing, Vermont is awesome. For another, it's a good place to get away from it all — especially from starstruck fans.

So if you do happen upon Myers at the co-op, try to refrain from yelling "Yeah, baby!" at him. Dude probably just wants to pick up some organic kale and kombucha like the rest of us.

Did I see a teepee just off of I-89 when my 'rents drove me up from Connecticut?

Strangely, yes. The teepee belongs to Darin Pratt. And it's actually his second — the first, erected eight years ago, blew over in a storm on New Year's Eve 2012. The new one is much bigger and more colorful. Because it's built on a spit of land across the Winooski River from Pratt's home, he accesses it via zip line — though there is a primitive road to it that is not visible from the highway.

"I've taken that zip line with a 12-pack of beer in my teeth," he told Seven Days.

Inside, the teepee is decked out like a tiki lounge, complete with a bamboo bar, fake palm trees, a stereo and a fireplace.

I've heard Vermont consistently ranks right up there for melanoma. But I haven't seen the sun in, like, three months. How is that possible?

That's precisely why. Because we spend about nine months of the year indoors, our risk factor for sunburns greatly increases in those times we do get out in the sun. Not so for people who are more acclimated to the sun's rays.

Skin cancer tends to develop when pale white people spend too much time in the sun. Vermont is 94.5 percent white. You're in college, so you can do the math, but that's a lot of pasty skin. Hence, higher rates of melanoma. Between 2005 and 2009, roughly 29 out of every 100,000 Vermonters had melanoma, compared to 19 out of 100,000 nationally.

Moral of the story: Sun-block is your friend, even in the winter.

So I went to buy some maple syrup for my folks and noticed a sign that read "State of Vermont Pure Maple Syrup Sold Here." I nearly spit out my sugar on snow! The logo on it looks like a ... well, you know. 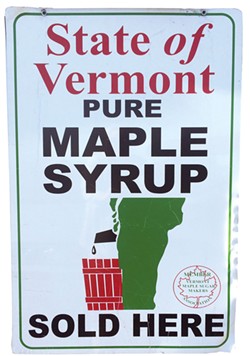 Like a dude taking a leak into a wooden barrel? Yup. It sure does.

Oddly enough, that logo has been in use by the Vermont Maple Sugar Makers Association for at least a decade — the sign is given exclusively to its 1,000 or so members. And you're not the first person to chuckle at it. Business Insider included it in a 2014 list of the "15 Worst Corporate Logo Fails." Other logos on that list included a poorly punctuated sign for Kids Exchange — it read kidsexchange — and a 1973 logo for the Catholic Church's Archdiocesan Youth Commission that appeared to feature an altar boy and a priest ... er, never mind.

The VMSMA is well aware of the sign's high snicker factor but has no plans to abandon it anytime soon. That's in part because the state recently changed its maple syrup grading system — which includes descriptions such as "golden color with delicate taste." So the VMSMA wants to give the public time to adjust to that before other changes, um, trickle in.

Correction 8/28/15: The original version of this story incorrectly stated that author John Irving lives in Dorset, Vt. In fact, Irving put his Vermont home on the market in late 2014.

The original print version of this article was headlined "WTF, Vermont?"