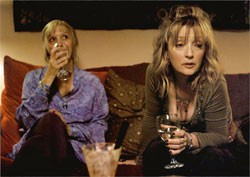 Another Year falls into that rarest and most exclusive of categories — that of films which fall into no traditional category at all. The 10th feature from British writer-director Mike Leigh is a genre unto itself.

Over the years, the creator of works such as Naked (1993), Secrets & Lies (1996), Career Girls (1997), Topsy-Turvy (1999) and Happy-Go-Lucky (2008) has perfected a process of building movies from the ground up through in-depth collaboration with his cast. The latest example is a semi-improvisational character study that finds the filmmaker at the peak of his powers.

Two of the characters we study are Tom (Jim Broadbent) and Gerri (Ruth Sheen), a North London couple who’ve been happily married for decades. He’s an engineering geologist. She’s a mental health counselor. They’re good humored, well traveled, intelligent, a tad bohemian and endlessly welcoming to a collection of friends who haven’t been as lucky in life.

Lesley Manville has earned award-season raves for her remarkable performance as Mary, the couple’s most frequent and most troubled guest. A secretary at the clinic where Gerri works, she’s a wine-gulping, motor-mouthed mass of delusions. In a wonderful early scene, she joins the pair for Saturday night dinner, stops chattering just long enough to take the next sip, winds up at bedtime too sozzled to leave and then, after hours of babbling about herself, informs Gerri, “If you ever need to share, I’m here for you. I’m a very good listener.”

Enter Ken (Peter Wight), Tom’s old friend and schoolmate, who’s decided to pay a visit. A heart attack waiting to happen, he’s big bellied, chain smokes and always has a drink in his hand. It’s not so much that the years haven’t been kind to him. They’ve just blurred by too quickly. He gives the impression of having gone to bed 25 and woken up 60.

What are the odds in the Age of the Dysfunctional Family that a film would feature not only a loving husband and wife, but also a loving son? Oliver Maltman brings just the right touch to the role of Joe, a thirtyish legal-aid lawyer and the object of Mary’s cracked romantic fantasies. It hits her hard when one day, out of the blue, he brings home Katie (Karina Fernandez), the woman he intends to marry. She fits in immediately. I haven’t seen a family this jazzed to be in one another’s company since “The Adventures of Ozzie and Harriet.”

It’s against this backdrop of domestic jolliness that Leigh offers moving riffs and ruminations on friendship, family, class, aging, dreams, disappointment and death. The film is filled with small details that, on reflection, contain monumental significance, and they’re slipped into some of the most unforgettable performances you’ll see this or any other year. It just may be Mike Leigh’s masterpiece.

Another Year is better by far than many of the movies we’ll be hearing about on Oscar night. I can’t imagine why it wasn’t invited to the party. Unless, of course, the Academy couldn’t figure out what category to nominate it in.