Another Vermont Pol Promises Broadband. Could It Work This Time? 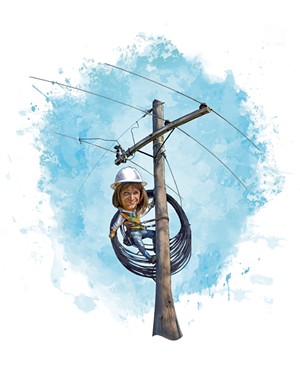 Gubernatorial candidate Christine Hallquist has a bold promise that sets her apart from her Democratic rivals: to deliver fiber-optic internet connections to every home and business in Vermont. If elected, she said, workers in bucket trucks would take to the roads to hang cable by the end of her first term.

"Vermont is not going to grow its economy without getting connectivity in rural Vermont," she said.

Promises of universal high-speed internet are nothing new in Vermont politics, but every attempt to deliver it has fallen short.

In his 2007 inaugural address, Republican governor Jim Douglas pledged to connect the state by 2010. He worked with the legislature to create the Vermont Telecommunications Authority, which had broad power to fund and build broadband using state and federal dollars.

By the time Douglas left office in 2011, the work still wasn't done.

When Democratic governor Peter Shumlin succeeded Douglas, he promised universal broadband and cellular coverage by the end of 2013. The state kept issuing grants for broadband expansion, and millions of federal dollars poured in — mostly in the form of U.S. Department of Agriculture grants — to help connect rural homes and businesses.

Shumlin's administration wasn't able to sweeten the economics enough to prompt private investment. His unfulfilled pledge became a political liability at the end of 2013, when he falsely claimed that he'd only promised broadband, not also universal cellular coverage. In fact, as the Vermont Republican Party gleefully pointed out, Shumlin promised — and failed to deliver — both.

Some of the projects worked, and regional success stories have brought high-speed internet where it wasn't available before. But many rural communities, such as Orwell, Halifax and Lowell, still lag far behind population centers. The state shuttered the Vermont Telecommunications Authority in 2015 and handed responsibility for broadband rollout to the Department of Public Service.

"It's not the solution to getting every home with good broadband service, but it does help," said Purvis, the Department of Public Service's telecommunications and connectivity director. "It does make a difference in the areas where we are spending our money."

Between 2016 and 2017, according to state data, the department awarded more than $1 million in grants to telecom companies such as FairPoint and ECFiber for broadband expansion in Randolph, Royalton, Peru and other underserved communities.

Five years after Shumlin's deadline, Purvis said about 20,000 addresses in Vermont — out of a total of nearly 305,000 — lack access to internet with a download speed of at least four megabits per second.

"That's really basic broadband," Purvis said. "Anything less than that is not functionally useful anymore."

The Federal Communications Commission's definition of broadband requires 25 megabits-per-second download speed. By that standard, according to the department's data, more than 63,000 Vermont addresses lack access.

Providing universal broadband has proven so difficult that most candidates for governor seem to have just given up. First-term Republican Gov. Phil Scott won't promise expansion until after the state's economy has grown. Of the four Democrats running to replace him, only Hallquist mentions broadband or connectivity on her website.

Democratic candidate Brenda Siegel of Newfane said she knew better than to make any specific pledges. "I understand that there's a giant problem," she said. "I also know that many governors have promised that connectivity and not delivered on it, so I want to be careful about the way we talk about it."

Democratic gubernatorial candidate James Ehlers, the executive director of Lake Champlain International, said he sees broadband as important for economic development but not as the first priority for most Vermont communities, which struggle with "insufficient water and wastewater infrastructure."

Hallquist considers internet connectivity the backbone of the modern economy — cat videos and all. She said that, if elected, her administration would work quickly to implement her vision.

"We would have legislation ready to go," Hallquist said.

Her plan is simple in its basics: Instead of relying on telecoms to bring service to addresses they've never reached, she wants electric utilities to be responsible for a statewide fiber network. Hallquist says her 12 years' experience as CEO of the Vermont Electric Coop gave her the expertise needed to lead state government through the legal and regulatory changes required to accomplish the task.

Purvis, at the Department of Public Service, said previous attempts at broadband deployment fell short for many reasons, but the biggest problem was cost.

Hallquist's answer is to have power companies string state-of-the-art fiber cables to homes and then bill users for it as they do utility costs. Internet service providers would pay to use the network and provide telecommunications packages for subscribers.

While the basics of her plan are clear, Hallquist has not proposed a specific payment structure to fund the system; she said the state's regulatory Public Utility Commission would ultimately decide. The commission has the authority to dictate how electric utilities can charge customers and how much different types of customers — industrial versus residential, for example — have to pay for electricity.

The fiber systems could be partially funded through a small fee on all electric customers' bills, Hallquist said, or the commission may decide that only fiber users should be required to pay.

Another unknown is the price tag. Hallquist said she isn't sure how much it would cost to install a statewide fiber network.

The concept is untested in Vermont, but Hallquist looks elsewhere around the country for inspiration.

In Iowa, Maquoketa Valley Electric Cooperative has already installed a fiber network throughout its entire service area. It's one of dozens of cooperatives nationally, from Idaho and Montana to Minnesota and Missouri, that operate networks.

"We own the poles, so we are able to string the fiber on our poles, which is significantly less expensive than burying the fiber," he said.

The Iowa system is structured differently than Hallquist's proposal in that Maquoketa Valley is also an internet service provider. Instead of leasing capacity on its fiber network to another company, the co-op sells internet service directly to its customers.

Lauzon said users' monthly internet bills cover the cost of the company's 2,500-mile, $65 million fiber system. Rates range from $60 per month for a basic residential package to $350 per month for the fastest business connection — a gigabit (1,000 megabits) of download speed.

While fiber internet connections will be available to all 17,000 customers on the co-op's electrical system, Lauzon said the economics would work with less than half of those customers paying to use the network, which is still under construction.

"Every meter will have access to our fiber system, but we expect only about 6,800 members to actually connect to our system within the first five years," Lauzon said.

Construction on the project began in November 2016, according to a company newsletter, and the first internet customer was hooked up by February 2017.

"I think Christine's concept makes sense," he said, referring to Hallquist's campaign proposal, "but each company's going to have to do their own economic analysis to decide if they can make it happen."

Morrisville Water & Light has already done that analysis. General manager Craig Myotte said the municipal utility found that the model could work, as long as enough of the company's 4,000 customers are willing to pay for it.

"[I]t hinges on the level of participation that we're able to get from the different customers," Myotte said. "I want fiber installed at my house, but for every one like me, we have two customers that either they can't afford it or they just don't have the interest. And that's going to be the hurdle to getting this project done, is figuring out how to get everybody involved."

Green Mountain Power spokeswoman Kristin Kelly said an inquiry from Seven Days was the first company officials had heard of Hallquist's plan. As the state's largest electric utility — it serves about 75 percent of Vermont addresses — GMP would be a major player in implementing the initiative.

"We're open to looking at it, but we would certainly need to know a lot more about what it means and what it would mean for all of our customers," Kelly said.

Chris Campbell, who served as executive director of the now-defunct Vermont Telecommunications Authority, acknowledged that Hallquist's idea has worked elsewhere in the country, but said the concept is at odds with the way Vermont has regulated utilities for decades.

The state's Public Utility Commission oversees telecom issues such as service quality and permitting for cell towers, but the state isn't involved in controlling how much telecoms spend or setting customer rates. For power companies, regulators closely watch infrastructure spending and have the power to set customer rates.

"This proposal would potentially blur those lines," Campbell said. "I don't think that's a reason not to consider it, but that's something that very definitely would be a policy change."

Whether Hallquist's plan is viable or not, Campbell said a focus on high-speed internet is a must in Vermont, where the state's economy is a major issue for voters and politicians alike.

Siegel agrees that broadband must be a priority for the next administration, but she acknowledged that she doesn't have the expertise to come up with a specific plan.

"Were I to be governor, I would hire Christine to work on this issue," Siegel said.