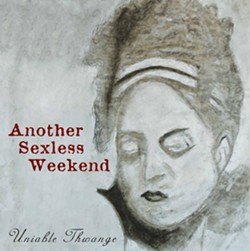 In music, nostalgia can be a double-edge sword. Sure, you want to honor the stuff that made you pick up a guitar or start to sing. But if you show too much slavish devotion, you can undo your own work, turning a well-intentioned band into glorified cover act.

Burlington's Another Sexless Weekend avoid this danger spectacularly. The project is the brainchild of Julian Foster and Andrew Poitras, with the former doing much of the songwriting. In an email to Seven Days, Foster asserts that he is a "devotee of '50s and '60s music and humbly do my best to contribute to the rock tradition." With Poitras — and some friends filling in on assorted tracks — the duo has completed a truly bizarre, charming seven-song album in Uniable Thwange.

The record kicks off on a somber note with "Animals (Don't Think About What's Not There)." As an acoustic guitar ambles steadily upward, Cleo Flemming urges some properly wild sounds out of her cello. The song imparts the hazy feel of trying to shake off a dream early in the morning. It's a strange choice for an album opener, but it works.

Foster has a unique vocal approach that resides somewhere between Sonic Youth's Thurston Moore and the Kinks' Ray Davies. But he retains an originality that defines and runs through all of Uniable Thwange.

Lyrically, Foster bypasses traps that can ensnare less clever songwriters. On "When Terry Came Home," he sings, "So you came to my door / Even though we'd seen each other before / We acted just like we were strangers / And when I let you come in and I asked you where you been / You said you don't dangle with danger." That might be my favorite line I've reviewed all year.

Throughout the record, the band touches on its influences ever so lightly. Between the strength of the songs themselves — "Hey Dan" and "Beasts Don't Bustle" both possess their own magic — as well as the surprisingly appropriate home-studio production, Uniable Thwange achieves an elusive thematic continuity. The album's easily heard intentions carry it far above nostalgic m imicry.

ASW are a different beast live than on record. According to Foster, they trend a little more toward rock and roll, covering the Kinks and Chuck Berry along with original tunes. ASW's next gig is a yard party this weekend, so you'll have to go full scenester to catch the band. But if you can't find the yard, just download the excellent Uniable Thwange at anothersexlessweekend.bandcamp.com.