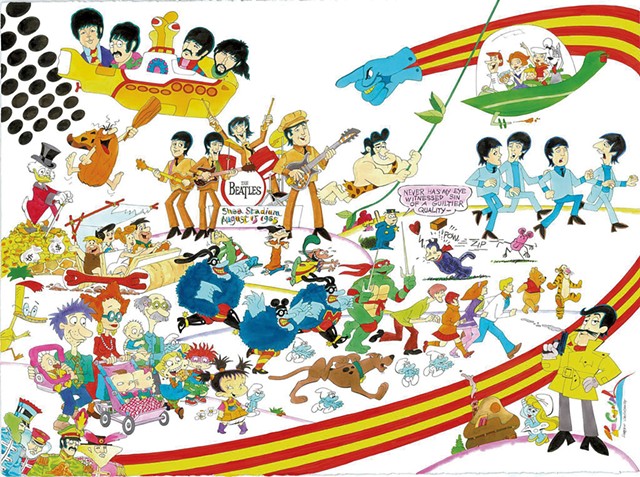 "It was twenty years ago today Sgt. Pepper taught the band to play," begins the tune introducing the 1967 Beatles album that music scholars by and large consider the apotheosis of pop. At the time of its release, 20 years probably sounded like an eternity to young Beatles fans. How surreal it is, then, to fast approach the 50th anniversary of Yellow Submarine, the animated film featuring that record's fictional Lonely Hearts Club foursome. Half a century flies when you're having fun.

That's certainly the way Ron Campbell sees it. Over a five-decade career, the Australian-born animator, now 78, brought a mind-boggling array of iconic cartoon characters to life — and not just on the big screen. For television shows, including "The Jetsons," "The Flintstones," "Scooby Doo" and "Rugrats," Campbell has done everything from storyboarding to directing. His work has earned Peabody and Emmy awards along the way.

The characters to which Campbell's name is most famously linked, however, are John Lennon, Paul McCartney, George Harrison and Ringo Starr. That's because Campbell is the only person on the planet who worked on both the Beatles' phenomenally popular Saturday-morning cartoon series and on the film Yellow Submarine. Celebrating the latter's golden anniversary, the legendary animator appears this Friday, June 15, through Sunday, June 17, at the South End Arts and Business Association Center on Pine Street in Burlington.

Since retiring, Campbell has traveled here, there and everywhere, putting on what he calls a Beatles Cartoon Art Show. At these informal affairs, he holds forth on his adventures in animation, answers audience questions and creates on-the-spot art, drawing inspiration from the cartoon multitudes he's inked.

The events also include an exhibition of original paintings — available for purchase — of the Beatles in both their TV and movie incarnations. Word has it that Starr has one hanging in his studio.

In advance of Campbell's Burlington appearance, Seven Days reached him at his home in Arizona.

SEVEN DAYS: Can it be true you'd never heard of the Beatles when you were hired to direct the cartoon series?

RON CAMPBELL: Al Brodax, producer of the TV show and film Yellow Submarine, telephoned me in Australia one night and said, "We've got this show we want you to direct." I'd worked with him before. When he said it was about "beetles," I thought, Ugh, they're scary. Kids won't like them.

SD: I grew up watching that and recall a slight discrepancy between the quality of the music and that of the artwork. Was money an object?

RC: Oh, yes. You had to cut corners and use all kinds of tricks, like a body that didn't move but had a head bobbing up and down. The budget was just $7,000 per episode.

SD: I know the Beatles were ripped off early on by people like music publisher Dick James. Were they compensated fairly for the series?

RC: Certainly. They had a very good agent by then named...

RC: Right. He told King Features what they should get, and they got it.

SD: And, over time, you became a fan?

RC: The further away they got from "I Want to Hold Your Hand," the more they grew on me.

SD: You can't get much further away than the music on Sgt. Pepper's Lonely Hearts Club Band. And, for the most part, that's the music Yellow Submarine was built around. How'd you come to work on that?

RC: Al Brodax again. I was in Hollywood working on other projects, and he asked my colleague, Duane Crowther, and me to animate material to connect the songs. We did the Chief Blue Meanie and his sidekick, Max, Jeremy the Boob, the Nowhere Man, all that.

SD: I'm guessing the movie work was more intensive than the TV shows.

RC: Much more. Duane and I created 12 minutes of Yellow Submarine. It took us eight months. Of course, I was also doing "George of the Jungle" at night and helping to develop a new show called "Scooby Doo."

SD: Slacker. I remember taking my junior high girlfriend to see Yellow Submarine when it came out — and finding it odd that the Beatles didn't do their own voices. Were they burned out?

RC: They had a four-picture deal. By 1968, they realized making movies is hard work. They didn't want to make another. Al said to them, "Look, just give us seven songs. We'll make the movie for you — with animation!"

SD: The look of the film is so distinctive, so inseparable from the '60s. The designer was a German named Heinz Edelmann, though most people seem to believe it was American painter Peter Max.

RC: Oh, Peter Max. Lots of people were creating psychedelic art. He was good but believed the style belonged to him. So, he claimed he designed Yellow Submarine. The studio talked with him. He stopped.

RC: Heinz was every bit as good as Max. He was a frail man, though, and working on Yellow Submarine almost killed him. When he went back to Germany afterward, he never did work like that again. He didn't want to be typecast with a fading style.

SD: And yet, here we are, about to celebrate the film's 50th anniversary with a theatrical revival on July 8. That says something about what you all achieved. Any thoughts?

RC: You know, it's something we did in our youth. If you'd ever told me then that the animation you're doing now is something you'll be talking about in 50 years, I wouldn't have believed you.

SD: Three of the Fab Four have dabbled in art. Do you have a favorite Beatle artist?

RC: Yeah, I like Ringo's paintings. He gives the money to charity.

SD: He does paintings of the peace symbol and signs them like they're his creation. Everywhere he goes, he's always flashing the peace sign. It's like he's got exclusive rights to peace or something. What's the deal?