Angling for Insight on a Vermont Fly-Fishing Tour 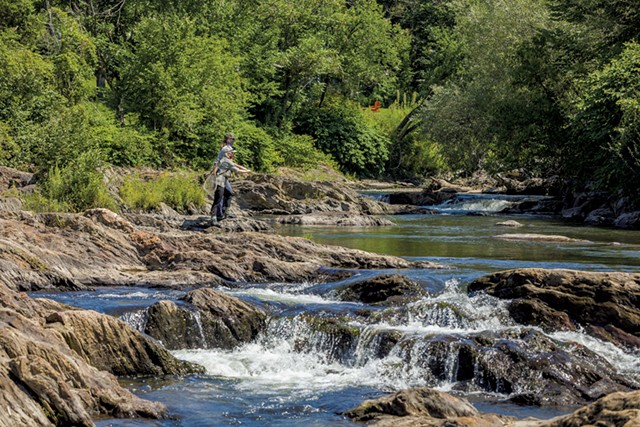 At a time when much of life takes place in the digital space, Stephanie Olsen, a fishing guide at Stowe's Fly Rod Shop, offers exclusively lived experiences in nature. "My office is the river," she said. "Isn't that awesome?"

In August, I took a tour of her "office" on a fly-fishing excursion. Opened in 1971, the Fly Rod sells conventional and fly-fishing gear in its spacious retail store and offers classes and a variety of fishing tours. Olsen and the other guides lead about six trips per day in the summer and continue tours into foliage season.

According to Bob Shannon, who owns the shop, "There's been a huge push of new anglers to the sport" since the pandemic began. Whereas out-of-staters made up the bulk of their tours in seasons past, Shannon is seeing Vermonters with increased time and desire to be in nature take up the sport. Women in particular are a growing population of anglers and fishing guides, said Olsen. I've fished with my father, but this was my first experience with fly-fishing. I wanted to play in the river and catch fish I could grill.

Fly-fishing looks natural when mastered but is too full of intricacies to wisely venture into alone. "If you don't have a mentor or an experienced fly fisherman [with you], it's a huge learning curve," Shannon said.

Casting alone amid the incredible vista of a winding stream and verdant mountains allowed space for reflection. tweet this

After we outfitted up, Olsen gave me a brief casting lesson at the shop's on-site pond, and then we began our journey through a field to the Little River, which feeds into the Waterbury Reservoir. Under the Public Trust Doctrine, all Vermont waterways, including those on private property, are open to the public for fishing unless a posted sign forbids it.

With conventional fishing, you can sit on a bank sipping a beer and watching a bobber. This is not possible with fly-fishing, which takes place in moving water — the fly fisher must move around within the river. It's more physically involved and requires constant observation and communion with the water. And it's simply more majestic.

Fly fishers decide which type of fly to use based on the water level and temperature, as well as which fish and insects are in the water. After dropping a thermometer in the river, Olsen picked a rock out of the stream to show the mayflies and caddis flies attached to it. They were what the fish were eating at the moment and, therefore, what the fly should resemble. Whereas the worm of conventional fishing alerts a fish's senses of smell, sight, taste and touch, a fly only entices their vision.

To make up for the limited lure appeal, the fly fisher must constantly adjust. As water pleasantly seeped through our fishing boots, we began false casting. That's when the angler casts the weighted line back and forth in the air a few times before landing it in the water. Besides looking cool, this dries out the fly so it floats. After the fly hits the water, the angler must adjust the line to the river's current, a process called mending.

Then comes the pause: Watch the fly float down the river and see whether anything bites. When nothing nibbles, take a few steps deeper into the water, then cast, mend and pause again.

In his contemplative 17th-century treatise on fishing, The Compleat Angler, Izaak Walton writes that one who "hopes to be a good Angler must not only bring an inquiring, searching, observing wit, but he must bring a large measure of hope and patience, and a love and propensity to the art itself."

Olsen, 30, who attested that she does not tire of A River Runs Through It references, patiently guided me through dozens of casts, which in no way resembled the graceful ones of Brad Pitt in the film. I was quickly reminded how infrequently most adults, myself included, deign to try activities they're not already good at.

After a couple of hours with few bites and nary a caught fish, Olsen left me to cast on my own while she scouted more spots downstream. The landscape of one's mind when success remains elusive is probably a gateway to insight, but initially I found resistance. Everything is hard right now, I thought. I just wanna catch a goddamn fish and feel like I'm not a failure.

Walton cautioned anglers against swearing, "lest they be heard and catch no fish." He writes that "when none bite, I praise the wise" — the wise being the fish too smart to go for his hook.

Casting alone amid the incredible vista of a winding stream and verdant mountains allowed space for reflection. The experience of fly-fishing reminded me of dating, or pursuing any deep aspiration over which we ultimately have no control. Assess your environs before you throw it all out there. Cut the line if it can't be untangled, then retie with something else. A bite often does not lead to dinner. Keep casting anyway. 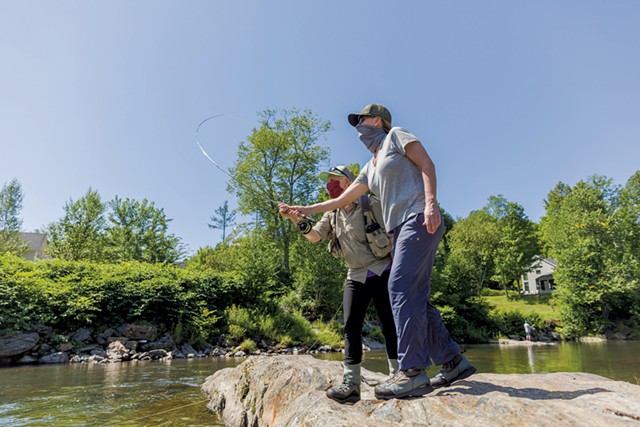 My guide and I waded to a shaded cove where we could see fish bubbles. I roll casted to avoid the trees but got my line caught anyway. Masks and sunglasses protected us from wayward hooks. Olsen, who helps teach natural resources during the school year, continued to offer encouragement.

At the end, we switched to a conventional reel with live bait, which felt like going from a unicycle to a three-speed with training wheels. When I felt the bite, I hooked it quickly and reeled in a rock bass. Olsen gently unhooked it, and I placed a thumb in its mouth. The fish was a little bigger than my hand, a wiggly, shiny yellow. Soon after, I caught a smallmouth bass and a pumpkinseed. I released the fish, too small to eat, back into the river and felt happy to have communed with them.

The art of angling requires continuous movement and reconfiguring. It teaches you to try something different when nothing is working. And when you've navigated the slippery rocks, when your arm is tired from casting a hundred times, when there is nothing tangible to show for all your efforts, notice your body in the current, the shadows of the trees on the water, and let the river be enough.

Speaking of The Fly Rod Shop