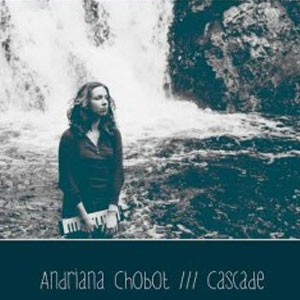 Vermont songwriter Andriana Chobot has been playing the piano since she was 4 years old — a span of 20 years. She began writing her own music, mostly classical compositions, in high school, where she was also active in theater. Both of those disciplines inform the material found on her recently released debut EP Cascade. While her music is most easily filed under piano pop, Chobot plays with the discipline and elegance of a classical pianist. And she certainly has a flair for the dramatic. Armed with an expressive alto, hers is a theatrical delivery that likely owes some debt to the emotionally forthright work of Rufus Wainwright and Sarah McLachlan — and puts her roughly in league with the local king of dramatic, piano-based pop, Gregory Douglass.

Cascade opens on the title track. A series of ringing, upper-register piano chords, well, cascade at the intro before colliding with an eddying pool of rumbling low notes. Chobot seizes on the tension from the outset and matches her foreboding musical surroundings with a pleading vocal style and searching lyrics. "What can we say from society's tongue? / What can we give them? How can we grow?" she sings as the song reaches toward a desperate emotional and musical crescendo. But then the mood changes. Over suddenly major chords and swooning strings, she sings, almost as if shrugging, "Hey, what do we know?" Then, "Just find your way, you renegade, in the cascade."

Through the remainder of the tune, Chobot navigates a series of musical twists and turns — an exultant instrumental bridge, followed by a well-orchestrated verse, then a second bridge that plays the song out to a gentle finish. It's impressively constructed and varied, suggesting that Chobot is not content to follow the standard verse-chorus-verse template.

Radio-friendly and catchy, "Not I" is perhaps the most straightforward of the EP's six cuts. Even so, Chobot wraps the song's pop skeleton in a variety of synthy ornamental effects and beats that help elevate it from your average top 40 single.

"New Love" is more adventurous, but boasts an equally sticky hook, almost as if Sondre Lerche were writing for Lorde.

"Stumble," unfortunately, is aptly named. Throughout the EP's earlier tracks, Chobot manages to avoid earnest schmaltz, which is impressive given the melodramatic nature of her music. But here she's simply too heavy- handed in her lovelorn musings, and her expressive delivery, an asset otherwise, is overwrought.

Chobot rebounds well, however. On "One for One," she proves capable of writing a tastefully dramatic love ballad. And "Alone in the Night" is the record's strongest and most complete song, bringing a promising debut to a satisfying close.

Cascade by Andriana Chobot is available at cdbaby.com. Chobot plays Radio Bean in Burlington this Saturday, May 31.