Andrew W.K. On the Power of Partying 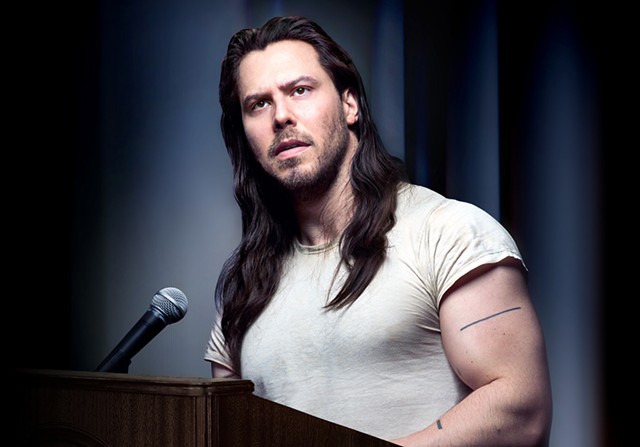 Everyone has something that makes them feel joyful, connected and alive. It might be running, painting or blowing up tree stumps. Whatever it is, hard-rocker and motivational guru Andrew W.K. calls that "partying." In his own words, partying means "taking something you're thankful for and showing it some sort of worshipful appreciation, in a very enthusiastic, energized way." If you get super jazzed about, say, antiquing, even that can be partying, apparently.

It's been 15 years since W.K. crashed onto the scene with his debut album, I Get Wet. Its blunt-force-trauma power chords, shocking album cover and repeated use of the word "party" laid the groundwork for his musical career and persona. After several years of doing the rockstar thing, W.K. added performance art, "happenings" and speaking engagements to his wheelhouse.

W.K. is currently in the midst of a lengthy, somewhat unconventional 51-date speaking tour, titled "The Power of Partying." Audiences in all 50 states and Washington, D.C., ask him about his secular-spiritual philosophy or any other topic they wish. W.K. has stated that the talks have no structure and he doesn't use any prepared notes. His Vermont stop is on Friday, November 25, at ArtsRiot in Burlington.

W.K.'s music career has been somewhat dormant in recent years. He has a long-awaited album in the works, which he hopes to release in 2017 — if the "party gods" cooperate. He has made countless media appearances, including interviews on Fox News, hosting the live-action Cartoon Network reality show "Destroy Build Destroy" and even reporting weather on a regional Oklahoma TV station. In 2014, W.K. started a traditional advice column in the Village Voice, which ended last year. He currently writes a more open-format column for Vice magazine.

In April 2016, he announced the formation of the Party Party, a legitimate political entity, based on W.K.'s values and philosophy. The presumption was that, if it were to catch fire, W.K. himself would end up on the November ballot as a third-party presidential candidate. However, the Party Party was dismantled after being sued by an organization with the same name.

Throughout his endeavors, W.K. has always surrendered himself to the party gods. Through serendipity and a willingness to take any opportunity that comes to him, he's become a cultural icon.

Seven Days caught up with W.K. by phone in the middle of his tour.

SEVEN DAYS: Can you clarify your "party" philosophy a bit more?

ANDREW W.K.: I was drawn to the word "party" because I thought it was easy to grasp in terms of this idea of celebration and activated gratitude — taking your gratitude from out of your mind and into the world in some sort of physical action. I'm trying to amplify that situation and enlarge it beyond perhaps something like the weekend, or a holiday, and consider the event of being alive as worth celebrating.

SD: How do drugs and alcohol play into your take on partying?

AWK: I never mention drugs and alcohol in my song lyrics, but I also don't frown upon [them]. Partying [isn't] an escape from life, [it's] a way of diving deeper in. It's easy to block out the fact that you're even alive at all. If you look at life as something of a burden, or as something to get through, then you tend to look for those moments of release or escape. I'm trying to build a mind-set that's looking at the chance to exist as something worth celebrating every day. Every moment that we haven't died is a major miracle.

SD: A lot of people are feeling overwhelming despair as a result of the election. What would you say to someone asking how to deal with the current state of affairs?

AWK: The human imagination gives us the ability to extract goodness even from the most potentially upsetting situations. [We can] do that in spite [of], or to spite, those forces that would otherwise be looking to thwart our efforts to persevere. These are great opportunities to soldier on toward goodness, and to live those values that you may be frustrated that others are not living. It can be very emotionally satisfying to lash out at other people when they don't do what you wish they would do. But that energy is probably better spent trying to develop those virtues within oneself, and to shine as much light as possible in the darkness.

SD: What if someone's version of party is unsavory?

AWK: I'm sure there are people out there that have fun doing all kinds of things that you or I wouldn't consider to be good or fun. There are people out there whose version of party would involve murdering other people. I hold out hope that the very nature of humanity is based on overcoming that kind of animalistic, primal urge to benefit oneself. If you're truly celebrating life, it's harder to disrespect other people's value as a human being if we're celebrating the whole phenomenon as something beautiful and worth fighting for.

SD: What do you say to people who think voting for a third-party candidate is tantamount to throwing one's vote away?

AWK: I understand what they're saying. Voting for the lesser of two evils is not what democracy is supposed to be about. The situation has developed to a point, through extraordinary efforts by the two major parties, to [ensure that] voting for a third party is essentially throwing your vote away. We should be able to vote for who we would most want to be [president], and having this tyrannical domination by a binary system is ultimately not benefiting everybody. At some point, we have to break away from that, and it's not going to be a painless process.

SD: You've made countless media appearances in a variety of roles. Is there a particular role or platform you've always wanted to tackle?

AWK: I like hosting a lot, and the studio environment. I would love to do something on the Food Network. Food has something inescapably uplifting and primal in it that everybody can relate to. But I'm not a cook, so there's the problem there.

SD: Really? You don't have one thing you make really well?

AWK: Does macaroni and cheese count?

AWK: OK, there you go. I can make microwave burritos, scrambled eggs, [a] glass of water. Any glass of any beverage — I can prepare that pretty well.

SD: What's the best advice you've ever been given, and who was it from?

AWK: A painter once told me, "Never let go of anger and resentment and frustration. Those [feelings] can be the most motivating." I've often felt very conflicted and guilty about those bad feelings, that they were somehow underdeveloped and immature, and that I should not feel them at all. If you can use them to propel yourself into some kind of action, then you should really cherish them.