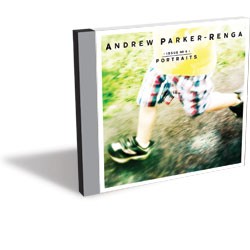 It’s common among the young and prodigiously gifted that emotional maturity is slower to develop than natural abilities. With a series of increasingly promising EPs released over the last few years, local songwriter Andrew Parker-Renga has offered listeners an enlightening glimpse into his growth as an artist. The most recent such snapshot, last year’s Issue 3: Emily, though flawed, suggested Parker-Renga was mere steps away from putting it all together and corralling his considerable gifts. And his newest recording, Issue 4: Portraits, is proof positive that he has done just that. It is a finely honed, artistically savvy collection that should propel the singer into the upper echelon of local songwriting talent.

After a short, sweet instrumental intro track, the EP gets under way in earnest with “Portrait.” Light ripples of acoustic guitar swirl gently above deep, ringing tones. Parker-Renga reintroduces himself as an uncommonly blessed vocalist, delivering hushed tones with tactful restraint. Perhaps the most unfortunate failing from the Berklee-trained singer’s earlier work was a tendency to favor ornate vocal bluster when a lighter approach was more prudent. He suffers no such folly here; this performance is measured and cool, though still compelling and emotionally charged.

“Sun” is next. Parker-Renga’s delivery here is fragile but bristles with an undercurrent of angst. APR has an obvious affinity for Omaha-based indie giant Conor Oberst, and his performance bears that out. However, the song rises above mere hero worship in a way the material on Emily did not. Particularly on the song’s achingly pretty chorus — complete with a stunning burst of vocal harmonies, and a fine turn from multi-instrumentalist Zack duPont — it’s clear the songwriter’s compositional chops have evolved in step with his emotional maturation.

The EP closes on “Twenty-Five.” In less capable — or perhaps younger — hands, the tune would veer close to gushy, romantic schmaltz. But the elegance and vulnerability of APR’s delivery and simple, straightforward wordplay prevent the tune from devolving into contrived melodrama. It’s a fine end to a command performance from a local songwriter finally in full control of his substantial talents.