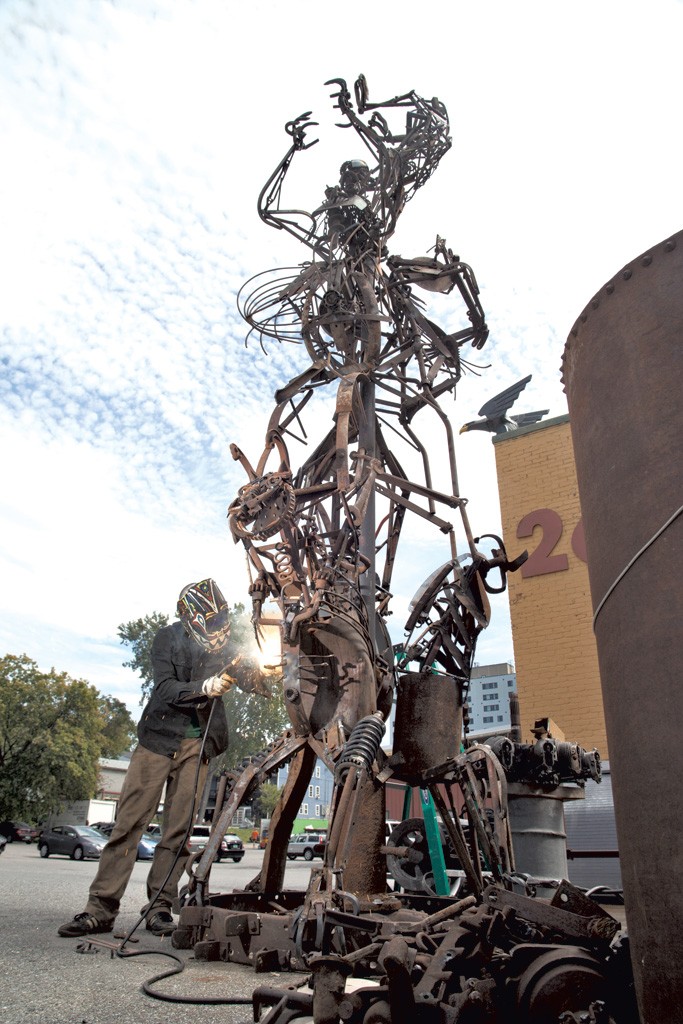 Last year, attendees of the South End Art Hop, as well as daily commuters on Burlington's Pine Street, couldn't help but notice an enormous rhinoceros ensconced just north of Conant Metal & Light. Made of scrap-metal parts, including former farm machinery, the formidable creature was the handiwork of artist and Conant employee Tyler Vendituoli. As he told Seven Days at the time, the rhino, named Ogden, weighed some 3,000 pounds. And he was for sale, for $10,000.

Ogden was a hard act to follow, but this year Vendituoli, 27, just may have done it — at least in height. "Waheguru" is 18 feet tall and consists of seven figures — three at the bottom, three more standing on those, and, at the top, an acrobatic figure doing a handstand. Sited in the same location as Ogden, the piece might not be done until after Art Hop, he says, but that's not evident to the casual viewer.

Vendituoli hasn't yet decided on a price. In fact, he says, "This year I'm not really thinking about selling it, or who should buy it." He's just focused on making it.

Once again, Vendituoli built his sculpture from scrap and found metal. Its central piece is a flagpole he got at ReSOURCE right next door — a year and a half ago. "I wasn't sure what to do with it," he says, so he stuffed it in one of his two cubbyholes in the Conant basement.

When ideas for "Waheguru" began to take shape, one of them bubbled up from memories of a childhood experience. "When I was a kid, my grandmother and I would make totem poles out of boxes," Vendituoli says. He came away from a trip to New York City's Metropolitan Museum of Art impressed by the New Guinea ancestor poles (also known as bis poles) on which figures stand atop each other. And the name? It's from a Sanskrit chant, Vendituoli explains.

According to an online search, waheguru means "wonderful teacher," but its most common usage is as a greeting among Sikhs. Whatever. "I just imagined [the figures] as guys dancing around a pole," Vendituoli says.

If the sculpture is multicultural in influence, its innards are as prosaic as a flagpole, shovel heads and car springs. The enormous, 400-pound wheel that anchors the sculpture's base is from a farm vehicle. A big piece of its infrastructure was found in the Winooski River. That rusted-tank thing: old lawn flattener, Vendituoli confides. We suggest "Waheguru" be translated as "old junk reborn as wonderful thing."