Looking at art can be transporting; images may take you to another place or time, or show you other ways of seeing and communicating — perhaps beyond known languages and cultural referents. Two major exhibitions at the Hood Museum of Art at Dartmouth College in Hanover, N.H., achieve all of the above: "Maḏayin: Eight Decades of Aboriginal Australian Bark Painting From Yirrkala" and "Park Dae Sung: Ink Reimagined." These extraordinary shows have little in common with each other aside from their current address — and the fact that each is far removed from white, Eurocentric and American art traditions.

For viewers who enjoy having their minds and biases blown, both exhibitions are highly recommended. To see them in tandem is a next-level experience, both visually and conceptually.

"We exist so we can paint the land." Djambawa Marawili tweet this

At first glance, visitors to the Hood might think "Maḏayin" was culled from the substantial cache of Aboriginal art in the museum's permanent collection. It was not. As the website explains, the exhibition represents the seven-year collaboration of the Kluge-Ruhe Aboriginal Art Collection of the University of Virginia and "Indigenous knowledge holders from the Buku-Larrgay Mulka Centre in northern Australia." (The Kluge-Ruhe is the only museum outside of Australia devoted to Aboriginal and Torres Strait Islander art.)

Though the artists represented here descend from ancestral peoples in a remote region of the continent, their eucalyptus bark paintings were made in the past 80 years — some quite recently. In other words, they are contemporary interpretations of ancient forms of Aboriginal expression.

That context does not necessarily make the deeply symbolic paintings more comprehensible to a North American viewer, but even an untrained eye can appreciate the richness of visual elements. The 90 pieces of bark are painted with patterns unique to 16 Yolŋu family groups: dots, waves, zigzags, diamonds — a seemingly endless variation of graphic marks and arrangements.

Many of the paintings also feature figures, such as lizards, fish, snakes, armadillos, kangaroos and humans; some reference the sun, stars, sea or land. The paintings are primarily long verticals, roughly rectangular in shape and rendered in natural brown, black and white ocher. Only one notable piece, titled "Bänhdharra (Ocean)," employs a brilliant blue pigment. The artist, Dhambit Mununggurr, explains in wall text: "Blue is the color of gapu, of water. The earth is blue, the sky is blue and the sea is blue."

The origin story of the madayin art is rather too complex to explain here — suffice it to say it figures in the history of cross-cultural relations in Australia — but it's spelled out on a wall in the museum. An abundance of text throughout the exhibition helps guide the viewer through a formidable number of names with unusual-to-us spellings, as well as the mystical significance of the works.

Perplexed viewers might take some comfort from the caveat stated in one of the printed guides: "As balanda (non-Yolŋu), it is not appropriate for us to learn the full meaning of these works. But Yolŋu have shared parts of these stories with us."

The Hood has beautifully organized "Maḏayin" and justifiably touts its groundbreaking stature: It's the first major exhibition of Aboriginal Australian bark paintings to tour the U.S. and, perhaps more importantly, marks the first time that Yolŋu people have been asked to participate in assembling one. Artist and cocurator Wukun Wanambi told the Hood for a press statement, "No Yolŋu have done that job before, only balanda have done it, but in a different way because they have a different way of understanding."

Artist and clan leader Djambawa Marawili added that the Yolŋu "are the tongue of the land. Grown by the land so it can sing who it is. We exist so we can paint the land."

Another superlative accompanies "Park Dae Sung: Ink Reimagined": It's the largest solo exhibition of the South Korean artist's works to appear in the U.S. That aside, the show itself is spectacular. Like the works of the Yolŋu, Park's are also steeped in reverence for place and timelessness. With the classic Asian medium of brush and ink on paper or silk, he creates paintings in a stratum between grounded and ethereal.

Some of the 23 pieces in the Hood show have not been exhibited previously, and local audiences are fortunate to be able to see them here. What impresses initially is sheer size: A few of Park's paintings exceed 25 feet in length. A short documentary video shows how he manages to execute such monumental works.

Park was born in 1945, at the end of World War II. Five years later, he lost his parents and his left arm in the Korean War. The disabled boy, and then man, devoted himself to making art and to the practice of calligraphy. Traveling around the world, he studied both Eastern and Western art traditions. Park's serene, lyrical works reveal nothing about global conflict or personal tragedy but everything about his deep absorption in his craft and keen observation of the natural world. 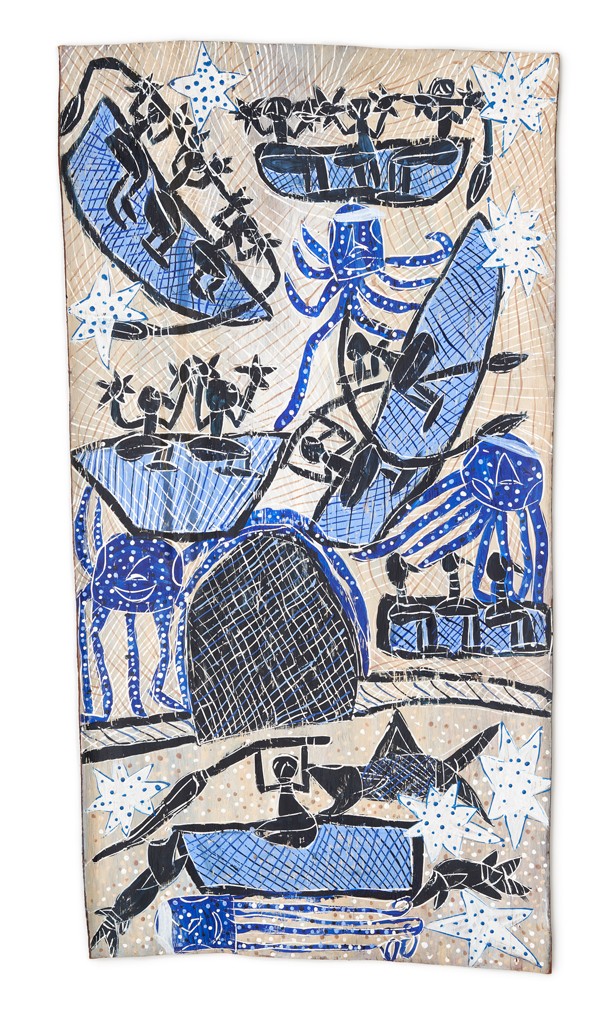 Sunglim Kim, an associate professor of art history at Dartmouth, curated the Hood exhibition. "Park is very humble and deliberate in personality yet passionate and exuberant when engaged with painting," she writes in a statement for the show. "Visitors will see two contrasting characters in his sensitive bird and still life works; long handscroll calligraphy; and bold, energetic and gigantic landscapes."

Though the curator does not explain what she means by "two characters," viewers can see Park's interwoven dualities for themselves: ancient Korean brush techniques and a contemporary graphic sensibility, delicate finesse and bold strokes, drama and contemplation, realism and abstraction. Park's enormously long painting, "Mount Geumgang in Winter," possesses all of these characteristics. Pointy mountains assert themselves like skyscrapers, partially obscured by snow; black communes with white. The piece is both spectral and dazzling.

Smaller paintings are hung in the same gallery, including lovely studies of flowers, birds and pottery. The most visually arresting display in the room, however, consists of three long scrolls of calligraphy, wall hung at one end and unfurled onto a low platform. For viewers who cannot read Seoye, these are simply streams of interesting graphic marks set upon beautiful paper. Unencumbered by the slightest comprehension of the written text, we are free to access a deeper language. Call it meditation.

East meets West meets Down Under in the Hood's twinned exhibitions. For receptive viewers, both present welcome opportunities to embrace the unknown.