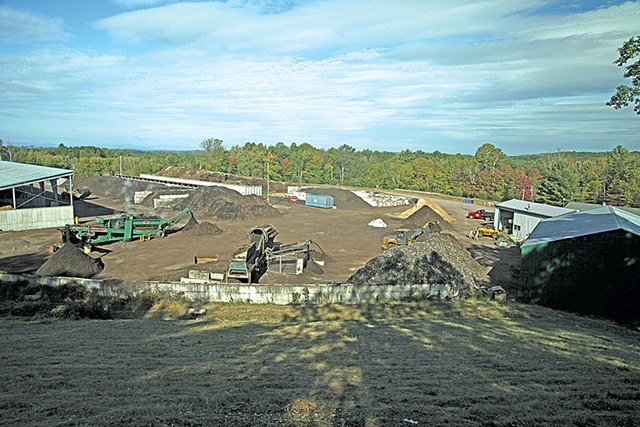 Rock shards from the Paleoindian Period have been discovered at a sand pit next to Chittenden County’s regional composting facility, less than a decade after concerns about Native American artifacts contributed to the closure of a similar operation in Burlington's Intervale.

The district acquired the sand pit through eminent domain in 2009 from a private company, Hinesburg Sand & Gravel, and granted the company the right to take sand from the pit for 30 years. The artifacts were discovered as the district sought to amend its Act 250 permit to expand the sandpit’s active excavation area and allow for stormwater improvements related to its Green Mountain Compost facility, according to its application. A portion of the pit is currently used for compost curing and storage, according to the permit documents.

Archaeologists who surveyed the land slated for further excavation found thumbnail-size rock flakes — most likely from stone toolmaking — that date back to 7000 to 9000 BC, according to a report by the Northeast Archaeology Research Center of Farmington, Maine. Those tiny shards of chert and quartz tell scientists something about the first people to roam the region after Ice Age glaciers retreated.

They could also qualify the site for inclusion on a national historic registry, according to the report.

"I think it's important, for sure," said archaeologist Robert Bartone, director of the research center and coauthor of the report. Other artifacts, such as spear points or remains of a fire hearth, could also be in the ground, Bartone said. "This is definitely a very interesting site and an exciting find for us," he said. His report details how the distinctive shape of the shards indicates that they may have been created in the making of "fluted" projectile points — the grooved spear tips are hallmarks of the Paleoindian Period.

Roughly 30 Paleoindian sites have been identified around Vermont, according to state archaeologist Jess Robinson. Approximately 50 Native American sites of various ages are on the state registry of historic places.

It's unclear what will happen as a result of the Williston discovery. If the sandpit expansion is approved — the district seeks permission to clear 15 acres of trees, remove up to 55,000 cubic yards of sand and refill the excavated area with composted material over 25 years — it would essentially destroy the archaeological site. Scientists would collect and study the artifacts before the bulldozers arrived.

Similar sites have been identified over the last four decades as a result of the Vermont land use law, Act 250, which requires land in the path of proposed development to be studied — but not necessarily preserved.

The District #4 Environmental Commission will have the final say on the Williston expansion.

Last October, after the Chittenden Solid Waste District applied to expand its sandpit, Vermont Division for Historic Preservation survey archaeologist Scott Dillon weighed in under Criterion 8 of the state land use law, which is designed to ensure that development does not have "undue adverse effect" on historic sites or rare or irreplaceable natural areas.

Dillon filed comments with the commission stating that there should be a survey for possible artifacts at the sandpit because the area has "high archaeological sensitivity for Precontact Native American sites," referring to the days before seafaring Europeans arrived in the Americas. He referenced one other Native American site, which is near a section of the Burlington Circumferential Highway that was never built. Bartone's report noted a more recent find: Several years ago, a private collector found an ancient fluted spear tip in the very sandpit that is now being studied.

It's rare for environmental commissions to deny Act 250 permits just because the construction would disturb Native American artifacts. Sometimes they impose conditions, though, that require construction to move in order to preserve part of an archaeological site. Such a move would be difficult in Williston because the discovered artifacts are in the center of the proposed excavation area.

"If we said that it had to be protected forever ... that would essentially amount to the taking of the land," said Dillon.

There's been little opposition so far to the sandpit expansion, including from Native American groups. Don Stevens, chief of the Nulhegan Band of the Coosuk Abenaki Nation, wrote via email that he had been unaware of the discovery and could not comment until he learned more about it. He said that state archaeologist Robinson does a good job of communicating with Native American leaders. "We are always concerned in the preservation of culturally sensitive sites of our ancestors, when found," he said. "The level of protection is determined by what is discovered."

Robinson said that additional surveying could be completed by this fall or next spring. "It's a compromise between development and preservation," he said.

Oddly enough, Green Mountain Compost was built to replace another large composting operation that also had been a threat to buried Native American artifacts, in Burlington's Intervale. People feared that moving huge piles of food scraps around would disturb traces of Abenakis and other groups long known to have frequented the area. State regulators forced the facility to close in 2011.

But environmental problems were also a major concern in the Intervale. State regulators cited the operation, which had grown steadily over a 24-year period, with multiple permit violations, including dumping contaminated wastewater. 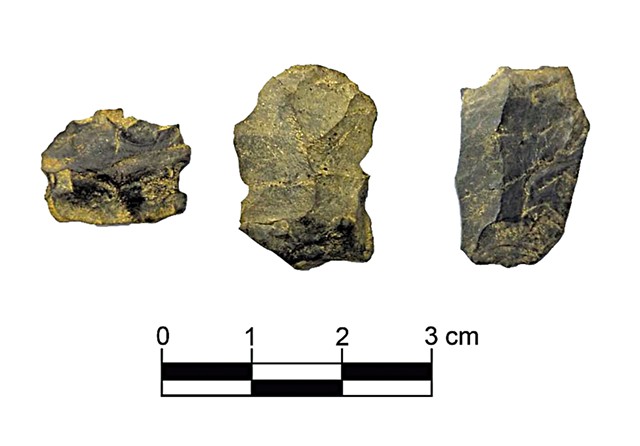 The sandpit expansion proposal in Williston includes a new stormwater pond and drain for the pit.

Sarah Reeves, executive director of the waste district, answers to a board of appointees from 18 member Chittenden County communities — an entity created by state law. In an interview last week, she said the district hired a consultant who is working on plans that could follow the current sandpit permit process. The next step would be to build infrastructure for active composting in the sandpit, at a cost of roughly $3.9 million to $5.1 million. The board is expected to discuss the project on Wednesday, September 12, at Williston Central School.

Reeves declined to answer questions about the artifacts, and she referred Seven Days to director of engineering and waste services Brian Wright.

If the sandpit expansion were approved, he said, the district would spend an additional $20,000 to $30,000 for a more intensive archaeological study and then proceed with the project. It's already invested $30,000 on studies so far. Still, he thinks it is important to document the find, and he said the district might invite the public to watch the next dig.

Bartone, the archeologist from Maine, has conducted many surveys as a consultant under Act 250. He said every discovery is exciting. In Williston, he said, it was intriguing "just to know that someone was there potentially ... 10,000 years ago at that same spot."

Corrections, September 17, 2018: This story has been corrected to reflect that the Paleoindian artifacts were discovered as the Chittenden Solid Waste District sought to amend an existing Act 250 permit to allow for additional sand extraction from a pit on its land in Williston.

The discovery will not impact potential plans to alter the district’s Green Mountain Compost operations at the site, according to district officials, and the status of the permit amendment will not affect the district’s ability to meet increasing composting demands.

The story originally misstated the annual tonnage of food scraps and yard waste accepted by the district’s Green Mountain Compost operation. Further, the story stated said the compost is “treated;” instead, the soil-enhancing product, which is organic, is simply “cured.”