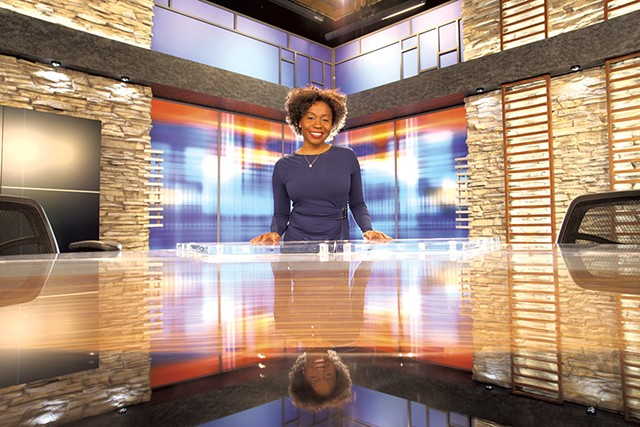 For two years, WCAX-TV anchor Eva McKend appeared on air with wavy chestnut-colored tresses. When she delivered the 11 p.m. newscast this past January 13, her hair was a mass of free-spirited dark brown curls.

"What happened to Eva's hair?" someone asked on the WCAX website. Another viewer told McKend she looked like she'd been rolling in hay backstage. A number of people wrote in via email and Facebook to say she looked beautiful.

Broadcast journalists — female ones, in particular — are accustomed to receiving unsolicited fashion advice from strangers. But for McKend, who is the only black television anchor in Vermont, the feedback about her hair has a freighted significance.

McKend is already an outlier. She's a woman of color living in an overwhelmingly white state and working in an industry that lacks diversity. In 2016, people of color made up 23 percent of the staff in television newsrooms nationwide, according to the Radio Television Digital News Association.

And there's a history of black female reporters facing backlash for how they wear their hair. In 1971, Melba Tolliver, a New York TV reporter, covered the wedding of Richard Nixon's daughter with a short Afro — against the wishes of her editors, who tried to persuade her to wear a wig. They edited her out of the footage. More recently, in 2012, Rhonda Lee, a meteorologist at a local TV station in Louisiana, was fired for responding to a Facebook post criticizing her Afro.

It's still rare for black broadcasters to wear their hair naturally on TV.

In that context, McKend's gesture is more than a style choice. Although she says it was a personal decision both to wear a wig — it's cheaper than a weave, which can cost as much as $800 — and to take it off, her unveiling qualifies as a cultural statement.

"In the professional realm, we have this standard, and I'm deviating from the standard. I'm shaking things up," McKend acknowledged. "I have a unique blessing and burden, and that comes with being the only black person at any of the three stations in the state."

Curtiss Reed Jr., executive director of the Vermont Partnership for Fairness and Diversity, summed up McKend's approach: "If people are going to judge her by her hair, they have totally missed out on her journalistic excellence. She has a nose for news — particularly news that resonates for communities of color around the state."

Culturally, Vermont is a long way from the Upper West Side of Manhattan, where McKend grew up. Her mother, who works in sales, and her father, a retired carpenter from Guyana, separated when she was young. McKend lived with her mother but stayed close to her father.

From kindergarten through 12th grade, she attended the private Birch Wathen Lenox School on full scholarship. During high school, McKend hounded her classmates to participate in monthly conversations about diversity.

"I would post flyers all over school. I would try to engage white kids at lunch: 'Listen, you really got to go to this thing, man.' People would see me coming and roll their eyes," she recalled. After a while, however, some kids started showing up.

McKend, a self-described "social butterfly" who was elected student council president her senior year, wasn't always at ease in school. "As a black woman in that white setting, I just had a lot of self-esteem issues," McKend said. When she asked a white guy to the prom, he said he would get back to her. "He never did," she noted.

McKend went on to Swarthmore College, where she majored in English literature and minored in black studies and religion. She started a column in the student newspaper, "According to Eva," in which she wrote about race and identity. A central theme: "Many black women become plagued by the notion that what is white is what is beautiful." While studying abroad in England, McKend hosted a radio show called "The Politics of Race in London," conducting on-the-street interviews with strangers.

McKend won a full scholarship to Syracuse University's S.I. Newhouse School of Public Communications, where she obtained her master's. She entered the job market with a résumé that included internships at CNN, NBC Philadelphia, and Essence and Ms. magazines.

When a paying job came up in the Catskills, at a 24-hour cable channel that required her to report and shoot her stories, McKend went for it. She hated lugging around heavy camera equipment but relished holding sometimes-corrupt local politicians accountable. "They called me a pit bull," she recalled. She had been there for two years when a couple of friends — both WCAX alumni — urged her to apply for an anchor position at Vermont's largest station.

In January 2015, then-news director Anson Tebbetts hired McKend as a morning anchor. Tebbetts recalled being impressed with her reporting portfolio: "It was investigative, hard news ... She's not just doing weather, not just standing in a snowbank." Also important: "She wanted to come to Vermont."

McKend, who'd spent seven summers at a summer camp near the White Mountains in New Hampshire, was enticed by Vermont's outdoor offerings. She was also excited to score an anchor slot at such a young age: "You're getting the opportunity to be the face of your station," she said.

At WCAX, McKend cohosts "The :30," a live evening interview show that airs at 5:30 p.m.; and anchors the 11 p.m. newscast, working from 2 p.m. to midnight. Her role on "The :30" includes taking part in lighthearted, borderline-ludicrous stunts such as wielding an ax and completing an inflatable obstacle course.

She embraces the silly assignments, according to her cohost, Keith McGilvery. But, he said, "Eva is best known for her hard news strengths."

During the five-minute interview, she was poised and articulate.

U.S. senators don't unnerve McKend, either. In a live interview last fall, Sen. Patrick Leahy (D-Vt.) tried to skirt her question about his role in promoting the Northeast Kingdom EB-5 visa projects, which had ended in scandal. McKend interrupted: "But do you feel responsible for this?" She also pressed Leahy about campaign contributions he'd received from Mylan after the company drastically increased the price of its EpiPens.

In March 2016, McKend confronted then-presidential candidate Sen. Bernie Sanders (I-Vt.) as he exited the polls after voting in the Vermont primary. She had previously done a story about Vermonters of color who were critical of the junior senator.

"You've been making the case to voters of color throughout the country," McKend said, "but back here at home, black Vermonters are really concerned you have not addressed some of their issues—"

An irked Sanders interrupted: "Well, I don't accept that. I think my record on civil rights is as strong as any member of the United States Congress, and I'm proud of that record."

It wasn't the first time McKend brought up race with people in power. One month before the Sanders encounter, the Vermont Supreme Court overturned the conviction of Shamel Alexander, who had been imprisoned for heroin possession, concluding that Bennington police had searched him because he was black.

In covering the story, McKend interviewed Bennington Police Chief Paul Doucette in his office. Toward the end, she asked the key question in the most direct way possible: "Was Shamel Alexander racially profiled?" Doucette, looking uncomfortable in his chair, adamantly denied it.

McKend regularly reports on immigrants and refugees, and has spotlighted a number of artists and musicians of color. "She takes on stories that would be ignored otherwise," said Traci Griffith, an associate professor of media studies at Saint Michael's College. "She's definitely playing a role in this market in particular."

Garrity agreed. "I think Eva has added a perspective to our newsroom that was possibly lacking, not overtly or intentionally," he said.

Not everyone appreciates the addition, however. "I have also heard complaints that she does too many of that type of story," Griffith said.

"I am aware of the fact that sometimes, because I like those issues, it will be a lot of me covering those issues," McKend said. She sometimes passes story tips and ideas along to colleagues, she noted: "I realize just because I'm interested in these issues surrounding people of color, doesn't mean I have to do them all."

McKend has always been drawn to the subject of beauty as it relates to women of color. In one of her college columns, she wrote, "Black women continue to have minimal representation in the media especially in all of our diverse hues, hair textures and body types. We all know that we very rarely see dark-skinned women, full-figured women and women who sport their God-given hair."

One reason she originally pursued a career in television, McKend said, was to "challenge traditional perceptions of beauty." Wearing the wig at WCAX, "in a way, it felt like I was not being my authentic self," she said, but she didn't feel ready to lose it.

"Everybody seems to have an opinion about it," she said, with good-natured exasperation. "I get 10 emails a day about how I changed my hair."

Most of the feedback she's received from Vermonters has been positive; parents have thanked her for setting an example for their children.

"Especially being black in Vermont, I want to be a role model. I want little black girls in the community to look up to me and think they can be on television, too," McKend said.

At times, that can be a burden. "None of my white colleagues have parents coming up to them in the City Market telling them, 'What you're doing with your hair is really making an impact on my child,'" McKend noted. "It's such an honor, but it's a lot to have to carry."

She wonders: What will those viewers think if she decides to wear a wig, or a weave, again?

McKend is currently in South Africa, volunteering with a nonprofit that hosts media workshops for students in a Cape Town township. That country is also still coming to terms with black hair, she noted. Case in point: Students of color at the Pretoria High School for Girls have been protesting rules that prohibit them from wearing their hair naturally.

While WCAX has been supportive, McKend said — unlike other stations, it doesn't impose rules regarding appearance — the anchor isn't beyond second-guessing herself.

Appearance matters in television, and the medium demands uniformity, she noted. "That's what we're told in the industry. You're supposed to look the same. Don't confuse the viewers."

Since going natural, McKend has heard from some of her black journalist mentors in bigger media markets. "Out of concern for the health of my career, they say things like, 'We know you're discouraged. We know things are hard right now ... but going natural is not the answer. You're only going to make it harder for yourself.'"

Griffith agreed that McKend's choice comes with risks. "It declares her difference. It declares her blackness," she observed. "I'm proud of her for doing it for herself," Griffith said. "Whereas a white reporter may be able to blend and fade into a crowd, Eva will always stand out."

Disclosure: WCAX and Seven Days are media partners. Alicia Freese and other Seven Days reporters regularly appear on "The :30."