Anaïs Mitchell on Her New Book, Her Forthcoming Album and the Future of 'Hadestown' 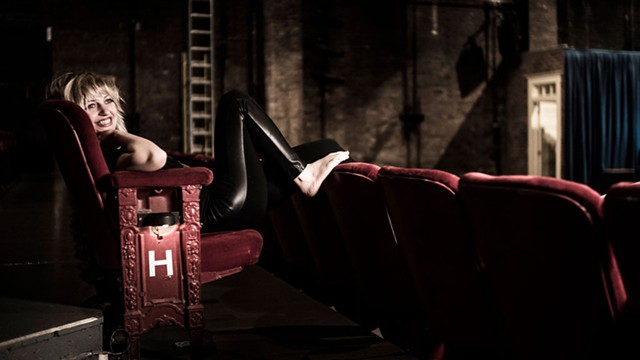 The year leading up to the pandemic was undoubtedly singer-songwriter Anaïs Mitchell's biggest. For one thing, her self-described "folk opera," Hadestown, became a smash hit on Broadway. The musical, whose roots trace back more than a decade in Vermont, cleaned up at the 2019 Tony Awards. The show nabbed eight awards total, two of which Mitchell personally took home.

But when the coronavirus began to rage through New York City in early spring 2020, shutting down Broadway in the process, Mitchell, 38 weeks pregnant at the time, relocated her family to Bristol, Vt., the town where she went to high school. Despite the personal and professional upheaval, the Vermont native says the change has yielded some positive results.

"I've been able to really appreciate, again, this small-town community," Mitchell said during a recent phone call with Seven Days. "All of the ways in which people are looking out for each other, it's very real and different from the experience in New York City," she continued. "You're kind of anonymous all the time [there], whereas here, everyone knows not only your name, but your mom and your brother and various aspects of your life."

With that spirit in mind, Mitchell has joined forces with two Addison County nonprofits for an epicurean virtual concert experience this Friday, February 12. Dubbed "Our Winter Table," the donation-based Zoom show benefits the Middlebury Community Music Center, a children's music enrichment hub, and OK You've Got This, a resource for parents. Attendees can also add dinner to their tickets from the Bobcat Café & Brewery in Bristol or the Arcadian in Middlebury. Dinner proceeds support the Giving Fridge, a "community refrigerator" in Middlebury stocked with prepared meals from local restaurants.

Seven Days caught up with Mitchell by phone and email to talk about her pandemic experience, the whirlwind year that preceded it, a forthcoming new album and a Hadestown companion book, Working on a Song: The Lyrics of Hadestown.

SEVEN DAYS: Have you done many virtual performances, either before or during the pandemic?

ANAÏS MITCHELL: No, I haven't. I really sort of went into this hermit space when we left the city. I sort of checked into certain events, especially Hadestown-related stuff, where I'd play one or two songs. But this is actually the first event that's more like a proper show. I'm quickly becoming the Luddite in the family. I'm the person on the Zoom call who forgets to mute myself.

SD: Speaking of Hadestown, what kinds of conversations have you had with folks in the Broadway world about the eventual return of live theater? Any good things?

AM: Well, I'm the last person to know when the theater's going to reopen. And that goalpost has just kept moving for people, which I think has been really tough for actors. I'm so grateful that we had a great year on Broadway before this thing happened, because it could easily have gone a different way. And I know a lot of shows that were just opening when Broadway closed. It's hard to know about what'll happen with a lot of those projects.

As far as good things coming out of this time — the largest civil rights movement in decades and pretty substantive calls to action in every industry, but especially theater. Coming from the music world, where I feel like people talk less about stuff — like, in music, you sort of feel it, and if it feels right, it feels right. But in theater, you're gonna talk about what's working, what's not working. The idea of a group or community processing things is part of that culture. So those conversations around race and inclusivity at every level have really been moving forward in the theater world. Hopefully that is gonna bear fruit when theater comes back.

Another thing I would say, just as an artist, as tough as it's been for people to not be able to perform in the ways that we're used to, the solitude is really good for creativity, if you can make the space in your life for it, which not everyone is able to do. But I know so many people who are plumbing the depths and coming up with some meaningful art right now.

SD: Did you learn or feel anything that surprised you while writing Working on a Song?

AM: When I first started to write it, it was just kind of therapy for myself. All of these years of work had gone into this thing. What do they say? It's like killing your babies?

AM: Right. This is really revisiting a lot of them and giving them a little home. Essentially, the book is all of the lyrics of Hadestown as they appear on Broadway. And then alongside of them are previous drafts of them. It started out feeling like I just needed to process what happened with all of these things. And partway through writing it I really got excited about the fact that maybe it could be helpful to other folks to really have a look at that long and meandering process, and how it landed where it did.

For me, as a writer, I can be very impatient when I'm looking for the right thing. I can get into a real attitude of it's wrong, it's wrong,until finally, miraculously, it's right — as if the right thing was the only thing that mattered. What the process really brought home to me is, all of those things that I thought were wrong are deeply embedded in the work itself, and the right thing wouldn't exist without them.

SD: Congratulations on your inclusion in Time's 100 most influential people of 2020!

AM: Oh, thank you! That was so bonkers.

SD: And having Broadway legend and Hadestown star André De Shields write your blurb, that must have been very cool.

AM: Yeah, that was almost even more meaningful than getting the award. He's a special man.

SD: You may have influenced everyone else, but who or what influenced you the most in 2020?

AM: I'm gonna say stillness. I had gotten used to a pace of life and a level of stress that was unsustainable. I think a lot of us had! The whole society, in fact. When everyone's moving that fast, you take it as a given, and a lot gets swept under the rug, because it feels like there's no time to deal with it.

This time of stillness has awakened in me a real hunger to be more authentic with myself and others. To do less but with more intention. I sure hope these lessons stick, because they're connected to a much broader societal thing of: Why this frenzy all the time? We'd do better for our kids and our planet, and have more of a shot at self-preservation, if we slowed down.

SD: Do you have any news to share about your band Bonny Light Horseman?

AM: We were going to make a record this fall, but we sort of scrapped the plans at the last minute, which was sad. But the good news is, I made a record instead, with my bandmate Josh Kaufman. And he produced a record for our other bandmate, Eric Johnson. So we've been making music, not as a band, per se, but with some of the same heads in the room.

We're now planning to work on a record this spring. We just love it. It feels really meaningful and intuitive to make that music with each other. It'll feel really great to work on music with those guys again.

SD: What can you say about your new record?

AM: It's the first record I've made where I hadn't toured the songs in advance. Maybe one or two of them. But a lot of the songs were written, or at least finished, during the pandemic. They were still warm, you know? If you've been touring something for a while, you're like, OK, I know what this song is trying to be. Then it can maybe be harder to allow it to be what it wants to become on a record.

It also just felt so amazing to write songs of my own where there were no dramatic or narrative demands on them. With Hadestown, for several years, it was a game of trying be this one particular thing and to advance this particular aspect of the story. So it felt more assignment-based. This was a really special feeling,to just get in touch with the muse. I'm hoping to play a lot of these new songs at this event.

The original print version of this article was headlined "Hell and Back | Anaïs Mitchell on her new book, her forthcoming album and Hadestown's hiatus"